10 Holiday Classics for Your Christmas Break 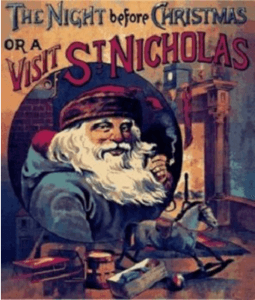 Holiday classics are not as rare as they used to be. We now live in an age where there is an explosion of content, and if even a small percentage of the new holiday-themed material is good, there is a lot more to chew on from a reader’s perspective. That said, the list you are about to read is hardly exhaustive, so feel free to add whatever you think should be included in the comments.

But if you’re just looking for 10 great holiday classics to read over your Christmas break, these represent a very good start.

1. A Tree Grows in Brooklyn by Betty Smith

The classic novel from Betty Smith, published in 1943, is a coming-of-age tale, so not everything in it is smooth-sailing (especially that heartbreaking Christmas Day of 1915 in the author’s recollections). However, the prose has a warmth and a nostalgia to it that work perfectly for the holidays.

The story centers on Francie Nolan, and begins when she is 11 years old. It goes on until Francie turns 17 and details her life in Brooklyn in the early 20th Century as the child of a struggling immigrant family. More relevant today than ever!

2. A Visit from St. Nicholas by Clement Clarke Moore

Clement Clarke Moore’s classic piece of Christmas poetry gave us our most vivid depiction of St. Nick. Everything takes place on the night before Christmas where all through the house not a creature is stirring (not even a mouse).

3. A Christmas Carol by Charles Dickens

A miserly old goat is visited by three spirits on Christmas Eve — sent by his old business partner Jacob Marley — in a last-ditch attempt to save his soul from eternal suffering. To do the job, the Ghosts of Christmases Past, Present, and Future, force our hero — Ebenezer Scrooge — to relive certain aspects of his bitter life and see how his actions have affected others (and how they will eventually affect him).

Charles Dickens’ classic Christmas tale has been adapted for small and big screens more than we can count, but the original prose work is well worth a look. While much of the material is dark, the ending soars and leaves you with just the right amount of “feels” for the holidays.

4. How the Grinch Stole Christmas by Dr. Seuss

Not gonna lie. This one should be read alongside the brilliant TV adaptation, simply because the book cannot give you the same effect of the tune “You’re a Mean One, Mr. Grinch.” That said, it is Dr. Seuss, which means the writing itself is entertainingly brilliant as are the illustrations.

5. The Snowman by Raymond Briggs

The Snowman is a rare achievement where author Raymond Briggs says so much with so few words. In fact, this entry in our list of holiday classics is completely wordless, but the wispy illustrations tell a powerful and warm story about a snowman, who comes to life in his little boy’s imagination.

A wonderful Christmas memory about friendship, you will be able to get through this one quickly, but do take your time with the illustrations. They paint a moving portrait.

6. In God We Trust, All Others Pay Cash by Jean Shepherd

Unless you’re a credits-watcher when you take in a movie, you probably haven’t heard of this book — at least not until you realize that it was the basis for the holiday film classic A Christmas Story. The memoir by humorist Jean Shepherd — who narrates the film by the way — featured short stories that were used for the movie. The rest, as they say, is history.

If you just can’t get enough of Ralphie and Family on film, then after you’re finished with this book, check out the second direct adaptation called It Runs in the Family.

7. The Shepherd, The Angel and Walter the Christmas Miracle Dog by Dave Barry

Are you a believer in reincarnation? If so, then you’ll probably find humorist Dave Barry to be the second coming of Mark Twain. A prolific author, Barry usually doesn’t write about Christmas, but this hilarious piece of nostalgia will sort of make you wish that he did.

According to the official synopsis, “The year is 1960, and the Christmas pageant at St. John’s Episcopal Church is a very big deal. Doug Barnes is a shepherd this year, which is better than being a Three King, because you get to carry a stick. There are problems, however. The girl he likes is playing Mary opposite a Joseph who is depressingly smart, athletic, and cute; the family dog is doing poorly, and they have no idea what they’re going to tell Doug’s little sister, Becky; and his dad’s just gotten a flat tire, which means they might not even get to the pageant. But Christmas is a time of miracles. And for Doug and his family, this will be the most miraculous Christmas of all.”

Wait, you mean THE J.R.R. Tolkien? That’s right, the father of the Lord of the Rings saga also dipped his toe into the Christmas waters with The Father Christmas Letters, a criminally forgotten holiday work that tells of a touching and unique Christmas tradition.

“Every December an envelope bearing a stamp from the North Pole would arrive for J.R.R. Tolkien’s children,” the book’s liner notes read. “Inside would be a letter in a strange, spidery handwriting and a beautiful colored drawing or painting. The letters were from Father Christmas. They told wonderful tales of life at the North Pole: how the reindeer got loose and scattered presents all over the place; how the accident-prone North Polar Bear climbed the North Pole and fell through the roof of Father Christmas’s house into the dining room; how he broke the Moon into four pieces and made the Man in it fall into the back garden; how there were wars with the troublesome horde of goblins who lived in the caves beneath the house, and many more.”

You’ll notice a touch of LOTR in every page, so it’s definitely a holiday treat for those among you who enjoy fantasy reads.

9. A Christmas Memory by Truman Capote

Perhaps no American author of the 20th Century possessed the versatility of Truman Capote, the author of classics like In Cold Blood and Breakfast at Tiffany’s. While Capote’s work usually has a sharp wit and a sense of humor, it is also poignant and touching, and A Christmas Memory is no exception.

A Christmas Memory, originally presented with Breakfast at Tiffany’s, is a story from Capote’s childhood “of lovingly making fruitcakes from scratch at Christmas-time with his elderly cousin, and has stood the test of time to become known as an American holiday classic,” the publisher notes read. This one doesn’t take long to get through, but it warrants multiple readings.

O. Henry, the classic author of short stories, penned “The Gift of the Magi” and published it in 1905 through the New York Sunday World. The story tells the tale of a poor young couple, who wish to exchange the perfect gifts for their Christmas together. Unfortunately, their means are limited and so they are forced to give up their most valued possessions with unpredictable results.

The story is a warm-hearted one that reminds you that it’s not about the gift, but the spirit in which it is given. It’s romantic, tear-jerking, and ultimately uplifting, and one of the best short stories ever written.

The holiday classics listed above will definitely keep you busy as you enter Christmas break, but again, they’re not exhaustive. What are some books or short stories that you would throw into the mix? Share your suggestions in the comments section below.