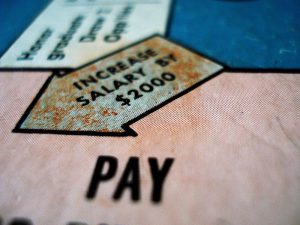 Salary negotiations can be the most challenging part of dealing with the job market, especially when you lack experience.

As you go throughout college forging your future career, be mindful of what goes into the process. It’s never too early to start thinking about strategy, even before your skills are etched in stone (or written on the degree certificate).

Here are some things that should help you win salary negotiations no matter where you’re starting from.

Salary Negotiations Tip No. 1. Know what you need.

What you need to survive on should be relatiely simple to figure out. What are the things you have to pay for that literally keep you in existence and functional?

Food, shelter, and clothing. Anything else? Didn’t think so.

This is, of course, a variable figure that will depend on how many people you are taking care of. If it’s just you, you’ll probably be just fine on $250-$300 a month on food, $60 per month on clothes, and whatever you can figure out on shelter.

If you live in or near a large city, be prepared to pay more for less, at least as far as square footage is concerned. You may want to get a roommate to make things more manageable. Let’s say you and your roommate can find a 2-bedroom in Los Angeles for $1,500 a month. Well, set aside $750 for your end and hope you’ve chosen your roommate wisely.

What you owe is not quite as important as what you need, but it is still pretty high on the priorities list because it can start to affect you getting what you need if it does too much damage to your credit.

An employer can also tie their decision to hire to this figure if your life becomes too much of a horror show because of it. That’s because, right or wrong, people tend to look at things like credit rating as an indicator of how responsible and capable you are.

So who do you owe money to? If you’re a college student, soon-to-be graduate, or alumni, you’re likely carrying a student loan. What else — credit cards? Day care?

Define these things as items that are absolutely necessary to address each month, even if missing a payment won’t shut you down or kill you. Everything else is just spending, and yes, you should know what that number is as well.

We’d calculate it for you here, but you’re probably better equipped to do that.

3. Figure out how much of your money is or will be tied to time.

This is a biggie, and it’s the first direct action related to salary negotiations mentioned here.

How much of what you earn depends on your being present? How many hours of the day, week, month, and year, will you have to actually “be there” to keep getting the paycheck being proffered?

Time is limited, so earnings will be as well. You want to make sure you’re getting the most money for the least amount of time spent since the latter is a commodity you will run out of, thus limiting your ability to pay the bills through effort alone.

Your pay and your take-home are two entirely different things, and while it is nice to have perks like health insurance, 401K, and half your employment taxes paid by employer — believe me, that last part is incredible — you still need money to live on.

To give you an idea of just how bad it can get on your spending power, one of my last W-2 jobs ended with me losing over 45% of my paycheck before I could even start spending it.

That’s why it is so important to know all bills and spending before settling on a final number. Need $3,000 per month and plan on having all the deductions I did? (State and federal tax, FICA, health insurance, 401K at 3% of income?)

Then the gross you’re going to need is around $5,454 per month or $65,448 per year. Doesn’t allow for spending, you say? Call that your floor then. Next, figure up how much you plan on spending or having in discretionary income on top of bills. Want an extra $500 per month for such a purpose?

Then you’ll need to multiply that times 12 months and add it to your total, making your ceiling $71,448 per year. Negotiate for that number. Be willing to walk away if they’re going to pay less than $65,448. More on that in a bit.

Back in the day (old man lingo for “before the Internet”), it wasn’t simple to know where the lines were between reasonable Ask, under-valuing yourself, and utterly naive.

Today, all you’ve got to do is type in Barnes & Noble starting pay or [insert job here] starting pay, and you can see a reasonable interpretation of how the company structures each position.

It may not be entirely accurate, but it’s pretty close.

If you aren’t applying to a popular chain, opting instead for a more localized business, search for the job title instead. Also, make allowances for cost of living.

If you’re going to work as a cook at a burger joint and Oregon pays $15 per hour due to high minimum wage laws, but your state is only at $8.50 an hour, you’ll want to avoid getting your hopes up at the entry level.

The Bureau of Labor Statistics (BLS) is an invaluable resource for knowing what occupations pay as well as what people are earning on average in different geographic regions of the U.S.

6. Make your floor your break-even, then negotiate upward.

Going back to the calculating take-home portion, let’s take that $65,448 number. Make peace with that number before going up because, too often, employers look at it as their job to get the best worker for the best price.

They are going to usually try and bargain you down. You want a negotiating range that allows for that while also giving you enough room to end with a number that makes you happy.

You’ll want that lowest number to be unbreakable because it will make it a lot easier to walk away if the employer is unwilling to commit to it.

When you are willing to walk away, you get to walk away with your pride and principles intact, and, more importantly, it often shifts the power in your favor.

The last time I did salary negotiations for a “normal job,” I had my number in mind and when they didn’t hit it, I walked. They called me the next day and came up $4,000 on their offer.

If I had taken what they were willing to give, I would have cheated myself out of that.

8. When calculating a ceiling, factor in what loyalty is worth to you.

Your “loyalty number” is hard to pin down without a frame of reference. Let me explain.

An employer once offered me a partial full-time position of four days per week because they couldn’t afford five. So I took what they were able to pay for the four-day and divided it by four to get a daily total.

From there, I added another 52 days (one day per week) to the 208 days the contract was for. Doing this, I got the per-day number and multiplied it bye 260 instead of 208 (their offer). This allowed me to give them a higher number if they ever wanted to bring me on full-time.

But it wasn’t enough.

It wasn’t enough because I knew that the extra day could easily turn into two or three extra days. (Can you say “salaried employee,” which basically means, “we can work you all we want and lower your earnings per hour to peanuts.”

I had to add something to it to make up for the potential overwork. So I picked a number, multiplied it by 12, and added it to the total. That was a number I could be “happy” with.

9. Be realistic in your approach.

If you select a range that’s lower than their floor, then they’ll be only too happy to take you up on it. Congratulations. You win. Some reward though.

Lastly, coming in with a floor in the range and a ceiling way above the range demonstrates you’re just in it for the money.

10. Apply smarter to position yourself for ‘The Ask.’

Part of the salary negotiations begins before you even make it to the offer and interview stages. It’s there in how you go about applying for the position.

If you seem like you don’t know what you’re doing, then you’ll be lucky to get an offer. But if you do, the employer will be working from a position of advantage because you’ve already “shown your hand” in some regard.

So do your research.

Know what the company does, what its accomplishments, challenges, and culture are like. Show them you know the duties of the job, and you are eager to demonstrate your knowledge. That will show through if you make it to the salary negotiations stage.

This goes along with No. 10 somewhat. By keeping your resume updated, we mean in both presentation and content.

You will want to continue learning all throughout your life as techniques and technologies change, and those changes should be making it onto your resume.

Also, resumes are as important for what they DON’T contain as what they do, so don’t be lazy. It may be great that you know how to use WordPerfect, the crappy word processor that came on virtually every Windows-operating computer throughout the 1990s and 2000s, but it won’t be useful to your employer so strike it!

12. Take incremental victories until the bigger ones come along.

Remember how to frame your victories. Be patient. You may have to give something away, but as long as you are not cheapening your brand or principles — and in the world of work, those are often synonymous — you can hold your head high.

In the example I shared above about my salary negotiation where I walked away and got an offer for $4,000 extra the next day, I still didn’t get what I wanted. But I got more than nothing which is what I had when I walked.

While you cannot control the economic ecosystems your governments create for you, you can seek to be educated into the best version of yourself.

Now what are some salary negotiations tips that have worked for you? Sound off in the comments section below.