The Case For Becoming A High School Dropout 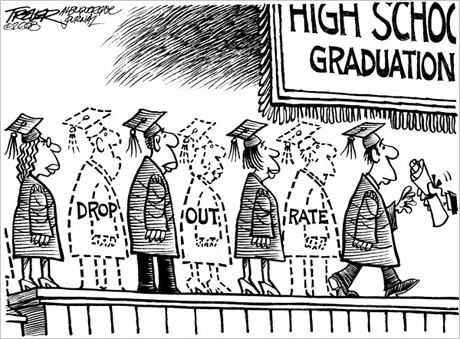 Donald E. Heller, dean of the college of education at Michigan State University in East Lansing, Michigan, recently shared his thoughts on his daughter’s decision to become a high school dropout, as well as his and his wife’s support of that decision.

It was a difficult decision for the Hellers to accept, but ultimately, they knew it was for the best. When you read their reasons, you will feel two things: 1) Good for them supporting this decision; and 2) Public high schools do not appear to be getting the job done any longer.

When Heller’s daughter approached him and his wife, their first reaction was one of reluctance. He and his wife had a long history in public education, and he admits that they respect what schools do.

“As an educator myself, and as the dean of one of the nation’s most respected colleges of education, one which trains over 500 teachers a year, I did not find it easy to support our daughter’s decision,” he explains. “My wife was a public school teacher for many years, and we are both very supportive of public schools. The decision to allow our daughter to become a high school dropout when she approached us with the idea was one that our family debated intensely during the last six months. In the end, we agreed with our daughter that this was the best path for her.”

Further elaborating on that decision, Heller says that he and his wife “wish that public schools could provide a better learning environment for children who are square pegs and who do not fit into the round hole of a traditional, test-centric educational environment.”

He added that the main factor behind the decision “was our daughter’s dissatisfaction with the high school education she was receiving.”

“She attended the public high school in our community, one that has a fine reputation,” he explained. “U.S. News & World Report, in its ranking of high schools around the country, rated her school as one of the best in Michigan. Students there, on average, perform very well on the state tests, far in excess of the statewide average.”

The Heller’s daughter was a strong performer as well, “at least as indicated by the measures we use today to assess how well students are doing in school,” he writes. “She scored well on the state tests, as well as the SAT. Her grades during her first two years of high school, however, did not seem to mirror her performance on the assessments. And she knew that she was not engaged in learning in ways that she had been in other schools she had attended.”

After examining curriculum, talking to teachers, and hearing their daughter’s reasons, “What we came to realize was that her high school did not meet her needs as a learner. While she was an interdisciplinary thinker and was intellectually curious about a number of different creative areas, her school was highly traditional in its structure and curriculum. We concluded it had largely a singular focus: to improve performance of students on the state tests rather than to encourage them to grow intellectually and to develop a breadth of learning.”

No School — Cool! Waitaminute, Not So Fast…

If you are listening to Heller’s tale, then you probably see the pattern developing here. If you stopped with his sensational headline, however — Why I Encouraged My Child To Drop Out Of High School — then you’re probably approaching this piece with all the wrong intentions.

Before you pursue your own dream of becoming a high school dropout, first consider what factors are at play in this particular case study.

One: Heller’s Daughter Is An Intellectually Bright Child And Her Education Means Something To Her.

At least that’s how she’s presented, and it was that understanding that motivated a college dean to encourage his daughter’s decision to become a high school dropout. You cannot possibly use this tale as a justification for your own desire to drop out if you don’t meet this criteria. In other words, you must want to learn, and you must take the responsibility for finding other means to make that happen.

In Heller’s daughter’s case, she has applied to an early-college program 600 miles from her home.

“When she was accepted, we agreed to allow her to drop out of high school and enroll in college,” Heller notes. “Our daughter will never earn a high school diploma, and she will never experience the joy of joining hundreds of her classmates in tossing their caps into the air after being told they are high school graduates. She will not attend her senior prom, nor participate in senior pranks. This was a difficult decision for two people dedicated to public education, and an even harder decision to make as parents.”

However, they made that decision because…

Two: A Contingency Was In Place.

Not only did their daughter care about her own education enough to make such a bold decision, but she also had a contingency in place that would challenge, motivate, and reward her for that initiative. Too often, a high school dropout becomes one because of an utter disdain for school and authority. There is no healthy alternative to replace the void that dropping out brings.

With a contingency, you are still working towards something, and you’re likely to give more of yourself to making it happen.

Finally: She Had A Support Unit.

Her parents were 100 percent behind her on the matter. That’s because they know her personally and know what kind of a young lady she is. She received their blessing because they saw the sense in her argument. Had they not, don’t think for a moment that she would be anywhere else but enrolled in a high school right now. There’s a lesson in that. Don’t make a decision this big without good reasons that you can bounce off a parent or guardian. If they can see the reasoning, too, then you may be on to something. If not, then you’d best listen. The older you get, the more you’ll realize that sometimes you’re too close to a decision to be able to make it without the proper input and feedback. When you’re “going it alone” as a high school student, well, more often than not that’s destined to end badly.

Becoming a high school dropout is a major decision with far-reaching effects into your adult life — and most of the time, they’re not positive effects. Before you make that decision, seek counsel from someone older whom you respect. Listen to what they have to say. And don’t allow your hatred for school to cloud your judgment. You need a backup if you’re going to do this. That’s because once you drop out, no one but you will be there to motivate your willingness to learn. If you’re not up for the challenge, then failure is inevitable.