The Method of Ioci: How the ‘Memory Palace’ Can Make You a Better Student 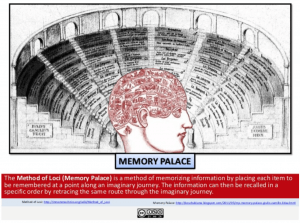 The Method of Ioci, or the “memory palace” technique, dates back to the ancient Greeks and Romans and consists of creating a palace-like structure that, in each room, houses all the vital details that you hope to remember.

This is a simple explanation, and a clear simplification of how you can put it to work in your educational pursuits, so we’re going to dive a little deeper by showing you what all actions you need to take to make it work in your life.

Start with the ‘Memory Palace’ Structure itself.

A palace is a physical house or building that contains many rooms. In each of these rooms, you will find information. Since we all have places that hold special meaning and that we know and understand thoroughly, it’s best to pick a familiar structure that already exists.

You’re at the front door of your home. Perhaps there is a brief walkway that spills out into the living room on your right. Walk across the expanse and hook a left. To your immediate right, there is a kitchen. Straight ahead there is a hallway leading to the master bedroom. Halfway there is a half-bathroom on the right and a door that houses the HVAC unit on the left. Keep going and you’ll enter the large master bedroom. To your left there is a full bathroom with two walk-in closets adjacent on the corner and a walk-in shower in the far corner. To your immediate left, you see the his/hers sinks.

Going back the way that you came, you’re now standing in the living room again, and you see another cutaway on the opposing side from where you now stand. Walk across the living room and you’ll soon be standing in the entryway of the hallway that you’ll only see if you hook a right. At the end of this hallway is another bedroom, but before you go towards it, you glance left and see another smaller bedroom. In between the two—at about the midpoint of this second hallway—there is another door, this time to a linen closet.

If you choose to go into one of these spare bedrooms, you’ll notice that they are joined by another bathroom, this time much smaller and with a standard tub.

That two paragraph explanation could fit many different middle or working class homes throughout the world. It’s simple, and there isn’t much to it, but that’s good. It’s easy to remember the layout, and thus, easy to visualize objects of varying kinds that are strewn throughout the room.

Think for a moment what you see as you’re crossing the living room while walking from one hallway to the other. Is there a couch? A sectional? A couple of chairs or a loveseat? Perhaps some combination?

The memory palace technique notes these objects along the way and assigns specific meaning to them. So instead of a couch, for example, you may be looking at 1776—the date the Declaration of Independence was signed. The magazine stand may be filled with eight magazine issues, but to you, each represents one of the people who signed the document.

By picking out specific objects and identifying them with a piece of information, you are essentially internalizing that unfamiliar info in a place that you know by heart. Consider it “committed to memory” moving forward.

Once you’ve chosen your ‘Memory Palace,’ walk the floor.

While the section above may have seemed a bit rambling and hard-to-follow at first, you likely saw the value in it when we asked you to hone in on the details of the place. The reason that this is called the “Method of Ioci” is because “ioci” is Latin for “places,” and you are essentially using the places you’re familiar with to familiarize yourself with foreign or voluminous material.

That’s why it is so important that you get the first step right—picking the best, most familiar location. Doing so allows you to take a mental walk and pull out all the most specific details you can think of, which can then be “converted” to the information you are trying to remember.

Taking that walk is vital to successfully utilizing the process, and since it requires a mix of visualization and verbalization to do correctly, you are more capable of learning vast amounts of information for instant recall in a relatively short amount of time.

And that brings us to yet another vital component of using the “Memory Palace” technique.

Get your ‘Memory Palace’ House in order.

While many of our homes do have little bits of chaos and clutter throughout, there is a very good chance that, in our minds, it makes sense to us as long as we can visualize the object and understand what it is there for.

What’s great about this part of the Memory Palace technique is that it doesn’t constrain you to doing things in a set pattern that you have to learn before using. It meets you where you are. That’s why some people can sit down at a cluttered desk and be absolutely disheveled and lost while others might feel the same way if their polar opposite came in and neatly organized all the clutter. You know what makes sense to you, and you can find the order in whatever chaos (or lack of chaos) there is when you’re in the confines of your home turf. It’s just the way that you and all the rest of humanity are wired.

By stepping back and using this pre-built construct to assign meaning to new information that you need to remember, it becomes easier to rapidly internalize the knowledge and/or skills that you actually need in order to learn.

Now, even though we’ve essentially laid out a simple construct for how the ‘Memory Palace’ works, you may still have questions—here are a few good ones that we’ve heard along the way, which we’ll now do our best to answer (or at least point you to the people who know best).

First of all, what are the optimal number of rooms in a Memory Palace?

For the answer to this question, we recommend entrepreneurship consultant Scott Gosnell’s response on Quora. “To some extent, it’s completely arbitrary. It’s limited by your ability to remember all of the rooms and/or locations within the rooms. … If you know ahead of time that the information you’re looking for has a particular structure, then you can design a memory palace to match that structure.”

As an example, Scott shares the following: “if you want to remember all of the states in the US, together with their capitals, dates of entry into the union, time zone and state bird, you might design a fifty room palace (one for each state), split up into four floors (for the time zones), each of which has an image for the date on the floor, the state capital on one wall, and the bird in a birdcage hanging from the ceiling.”

This perfectly illustrates how you can work with numbers to make organizing and building your Memory Palace structure simple.

How do you expand a Memory Palace once it’s in place?

Here we would refer you to Ron White, a two-time U.S. Memory Champion who is widely known for being the record holder of the title “Fastest to Memorize a Deck of Cards.” Here’s what he has to say.

“The first thing I would suggest is do NOT create new locations in the rooms. For example, if you have 5 items selected in your kitchen and you have been using those 5 items for a while. Don’t go back and say, ‘Ok, now I am going to had 3 more locations to this room.’ That just creates confusion and could lead to you skipping locations in your recall. So the best way to expand is to create new memory palaces. This is what I would do. List out these places: Your home, Friends home, Favorite restaurant, School, Office, Sports stadium. Then in each one of these select 20–30 items. That expands your Memory Palace but by 150 locations right there.”

How can you use the same Memory Palace for different learning tasks?

Here, we recommend Andrew Meldrum‘s excellent response on Quora. “This is similar to asking how can we use the word ‘chair’ for such a large variety of shapes? We do not confuse one chair with another. Guessing here, but experience tells the mind that there are the ‘kitchen chairs’ and the chairs at Granny’s house and other mental background locating awareness happening at some level within the mind. Thus the memory list or palace you used at 10am which started with cornflakes is different to the one you started at 11am which was about a sales meeting. While the mental ‘walk’ may take the same route the palace is different because of the reason and location you mentally used to start placing memory links into this palace. So a possible answer … would be that each palace is different because of the reason you start creating it.”

Can you ‘build’ a ‘Memory Palace’ before you ‘fill’ it?

For help with this, we recommend checking out this page from the Art of Memory, with a special focus on the section marked, “How do I get more palaces/locations?” Magnificent reference.

Building and organizing a Memory Palace is not as difficult as you think it is, provided that you are willing to start with a place that is familiar to you and hone the activity as you become more comfortable with it. We recommend starting with the amount of information that you want to learn and then to build the palace to suit it based on what you already know. What are some questions that you have about the Memory Palace technique? Share your thoughts in the comments section below.