Valedictorians: Truth About Life At The Head Of The Class 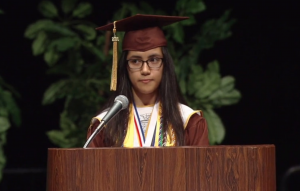 Entrepreneur Magazine recently ran an article on the success rates of valedictorians and salutatorians after high school.

As many of you know, the coveted V and S positions mean you were No. 1 and No. 2 in your class, respectively.

The tantalizing title of the article implied that valedictorians didn’t accomplish quite as much as the nation’s top millionaires. However, they did hit “all the traditional markers of success.”

That meant they earned a college degree and many of them went on to good-paying jobs in career fields of their choosing.

But when it came to the type of earth-changing performances of a Steve Jobs (just as an example), they were nowhere to be found. Citing a Boston University study, the article — as well as the book Barking Up the Wrong Tree — note that game changers across all businesses and industries tended not to graduate at or near the top of their classes.

Furthermore, the average grade-point average (GPA) of 700 millionaires surveyed was a paltry 2.9.

Now, what are the lessons in this for you, good student?

Tip 1 when considering the valedictorians’ pathway: Don’t base your life on exceptions.

As a result, they say things like, “Sheesh, Michael Jordan didn’t even make his high school basketball team. I’m not gonna practice.”

Could you follow this Jordanian path and still succeed? Yes, but it’s highly unlikely, and it leaves out some key factors in Jordan’s success. Those factors: he practiced like a madman and did eventually make the college basketball team, which enabled him to eventually find his way to the NBA.

Are you putting in that kind of work to get where you would like to go? Albert Einstein may have dropped out of high school, but he was also smart enough to come up with e=mc2. Got any of that in you? If not, hit the books!

2. Do find your passion, but only allow it to take over when it converges with your expertise.

Passion without expertise is a recipe for disaster. Passionate idiots do things like shoot at congressmen.

When you can match your passion with your expertise, well, then you have something worth pursuing. But just saying, “I want to be an astronaut” because you have seen every episode of Star Trek isn’t going to get you anywhere in life.

Explore the knowledge behind the things that make you passionate. Floating around in a space station and fighting off alien invasions might seem cool, but you’re not going to accomplish a fraction of that if you don’t know the math and the science and the communication skills necessary to navigate that educational pathway.

3. Realize the level of sacrifice down both pathways.

Joining the ranks of the valedictorians — at least if you follow their typical life path — may not seem like it is wrought with risks, but that depends on your viewpoint.

For some, that sounds like heaven on earth. For others, it’s one of Dante’s levels of Hell. Still, for others, it starts out sounding great only to run aground five to 10 years down the road when the malaise of everyday life becomes too much to bear.

In other words, life has risks either way.

For the maverick — the guy with the 2.9 GPA and the millions of dollars? Well, notice there are only about 700 of them in this country of 320 million people. Not to be a downer, but that is essentially 0.0002188% of the population.

The odds are horrendous, and for many of the 99.9997812% that don’t make it there, lives are anywhere from poverty level to that upper middle class picture painted of the valedictorians. It is a mixed bag of results, in other words, but it comes with a rougher road to hold as studies indicate when comparing the earning power of college grads compared to non-college grads or graduate degree holders with their four-year counterparts.

Sacrifices and challenges are inescapable, and you are going to have to give up on something when you choose the other. Many are not prepared for that realization when they start down either pathway.

The valedictorians and salutatorians of the world are, no doubt, successful — at least by society’s standards. Those are worthy pursuits, and you should not give up on them. However, not being able to fit into that mold will not necessarily make you an underachiever.

In fact, the numbers are pretty clear. While the deck is stacked against you, you stand a better chance of changing the world and being among the wealthiest Americans if you march to the beat of a different drum than the one formal education is playing. Just know the downside of that choice is a pretty steep one. Which will you choose? Also, what are some tips you’ve picked up from valedictorians you know? Sound off in the comments section below.