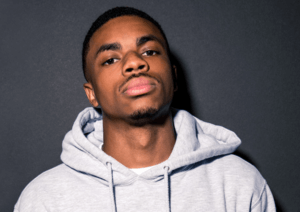 CNN recently caught up to Vince Staples, the 22-year-old rapper from Long Beach, California, to get his thoughts on hip-hop today — namely the so-called “conscious rap” movement — and not only did he share those thoughts, but he also shared some compelling details on modern education and rap’s place as a reflection for those in his generation.

Of the core topic — conscious rap, or rap music that is socially conscious — he said that he didn’t really understand it.

“I don’t really understand the ‘conscious rap’ label at all honestly. I feel like the more we understand, the more we relate to each other, the better off we’ll all be and the better we’ll be able to coexist,” Staples said.

What some see as a movement, Staples indicates that he is just rapping about life. His music, in other words, reflects the realities of who he is, where he’s from, and what is important to him.

Turns out, one thing of major importance to Staples is being aware of what children are going through at home and designing an education system that seeks to give every child the best shot at success.

“The first time I’d ever been in handcuffs in my entire life was on school campus,” Staples notes. “There’s a statistic that every suspension up to ninth grade doubles your chance of dropout and it triples your chance of a run-in with the police — not necessarily incarceration but where there’s some detainment or arrest. All these things that could be avoided.”

The answer, for Staples, is to rethink how school’s approach the issue of discipline — not so that children can get away with bad behavior, but so that they will stay in school and away from the negative influences they may be seeing at home.

“It’s crazy because it’s not necessarily a black thing and not necessarily an urban thing because it shows when suspension rates are lowered, the overall performance of the academics in the school rises for everybody. And dealing with a child’s problem isn’t sending them back home when the problem derives from home. If we focus on what school is actually for and think more about the children in the long run then maybe more kids will stay in school,” he said.

Schools have always struggled with the balance between teaching and discipline. On the one hand, an entire class cannot take a detour because of the repeated misbehaviors of one child, but on the other, the way in which schools deal with disruption may be compounding the problem instead of working to help it.

An unfortunate reality in all of this is the influence of drugs, something that Vince Staples raps about in his music.

“Drugs have always been a part of music, and it went from the drug dealer to the drug user now,” Staples said. “There’s more music being made about the drug use than it was the distribution of the drugs, and that was something that to me always seemed like a last resort to a lot of people that needed a way to live, they needed a way to make their money to survive to support their families.”

He then tells CNN how the drug problem has hit close to home, a reality others just like Staples might be facing at present.

“I lost one of my best friends not too long ago, this year actually, a couple months back. He spent time with everyone’s parents. Everyone’s parents took time taking care of him. He’s ours. He always extended his hand to us. He didn’t know what Xanax was a couple years ago. This is the first time I can say in my life where I’m seeing people become drug addicts.”

“There’s a will and a need among some of us to try to better ourselves and better our perception. I mean there’s just so many better things we can do and we can show these kids than what drugs to take,” Staples said.

Check out the full video here.

Going back to the balance, how should schools be dealing with behavior while working on advancing their students’ educational opportunities? Is it even possible?

Unfortunately, the problem of school discipline is not one that can be deferred or avoided. As every psychology expert can tell you, most problems start at home.

If parents are not doing their part in dealing with behavioral issues and providing a safe environment for the child, then it becomes apparent that the school will have to deal with it.

Legislation, at present, tends to hold teachers and schools fully accountable while expecting no effort from parents. This has been a recurring issue among Democrats and Republicans as evidenced with No Child Left Behind, and the fallout from it.

What NCLB did was send a message to parents that if their children are failing, it isn’t their fault. It is the fault of the school and the teacher. This message, of course, was motivated by the fact that there are more parents who vote than there are teachers.

Add-ons to NCLB, such as teacher merit pay and rigorous standardized testing, are ones that have been championed by both Presidents George W. Bush and Barack Obama.

The situation that Vince Staples mentions above is further proof of why it’s wrong for parents to expect other people to pick up their slack. Staples’ friend who died apparently depended on people outside the home for the things he wasn’t getting inside the home. And even though there was a willingness there to make a difference in Staples’ family — and the families of other children — it still couldn’t save the young man from himself.

Discipline is an ongoing issue, and one that should fall more to the parent. If politicians were serious about fixing the issue, legislation would be designed putting that onus on Mom and Dad instead of an English or science teacher.

It is certainly an issue worth taking up, because, as Staples notes, children who stay in school and make advancements aren’t just assets to themselves, but their entire class.