Every school has them: Students who don’t take anything seriously because they plan to “just join the military” after high school. You don’t have to be very wise to the world to know how flawed this logic is. The subject of English is usually one of the most reviled with these types because, really, “how’s The Great Gatsby going to help me in life”? If this describes you, snap out of it. Words are as important on the ASVAB exam as they are anywhere else. There are literally thousands of words that you need to add to your vocabulary if you want to score well and set your own course for success. 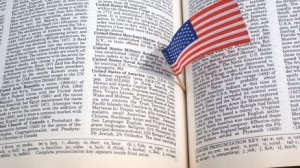 From general vocabulary that turns up on the word knowledge portions to some of the jargon you will see on spatial, auto and shop portions, word knowledge is essential. It can be used to bolster and protect sensitive internal communications vital to national security; to properly assemble and maintain machinery and equipment vital to your brothers-in-arms’ safety and security; and to warn of shady characters and the possibility of attack.

As such, there are vital vocabulary words you will need to come to terms with. Here are ten, but there are thousands more.

According to Dictionary.com, countenance means “appearance, especially the look or expression of the face.” Since so much of human communication is non-verbal, knowing what this term means and how to read it in public can be the difference between life or death in some situations, especially in foreign conflict or homeland security.

When something is mandatory, Dictionary.com describes it as “authoritatively ordered.” Excelling in the military is as much about following orders from the chain of command as it is about being a leader. Knowing what is mandatory to a mission is essential in being able to complete it.

Again to Dictionary.com, the definition of ardent describes someone who is “intensely devoted, eager or enthusiastic.” Like many words it can have a positive and a negative connotation, both of which are useful in the military – be it an ardent terrorist cell intent on committing an attack or an ardent soldier who is best served in an area where his passions and training are highest.

The military is a place where respect is owed and respect is given. Curt responses may have no place in the chain of command, but it is important that you know the word means “rudely brief in speech or abrupt in manner,” according to Dictionary.com, or you could find yourself guilty of committing it.

When a soldier is stalwart, he is “strong and brave,” or “valiant,” Dictionary.com states. No matter what field of training you are in, it is the goal of the military to ensure that every enlistee bears these qualities.

Being able to decipher fallible information can be the difference between keeping the peace and losing millions of lives. The military expects their intelligence to be top-notch, so they can keep weapons of mass destruction out of the wrong hands and thusly protect both the nation’s population and the people of the world from terrorists.

One’s ability to be judicious in their decision making shows a characterization towards good judgment. In order for the military to maintain safety and public peace it must be wise with how it deals with sensitive information in the face of enemies, the public and internally. That’s why there is a chain of command, and why you should know this word.

In the heat of the battle and under enemy attack, a medic must be ready to attend to a wide range of injuries and contusions. The afflicted soldier’s countenance and mannerism is important in communicating the needs of the body, and when a soldier is despondent, it is usually indicative of a greater trauma. Knowing the word, and more importantly how to spot despondent behavior, is vital in emergency care and a number of other areas.

Military personnel must be judicious in their decision-making, especially with regard to situations that may call for them to eject personnel or ardent protesters from a position that could threaten safety and security. When you eject something, you force it out or expel it from a position where it does not belong, and when you are required to answer your country’s call at a moment’s notice, that is one of the actions with which you may have to deal.

No one wants to finish where they started out. Everyone who joins the military wishes to achieve more for their lives than what was originally possible. The chain of command in the military gives service men and women of all types a level to which they can aspire in their careers. The pinnacle of a unit or division is its acme position, and that is a word (and a position) you should always be working towards.