10 Improvements The iPhone Has Made To Student Life 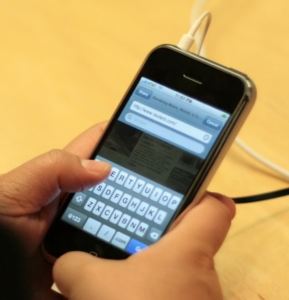 The iPhone has just turned 10 years old. As you’re reading this, it may be a day or two after, but the point is, it’s been in our lives for a decade, and it has changed a lot about the world.

The most obvious impacts have been to the worlds of business and technology, but all that has a tendency to affect education as well.

Needless to say, students of today are playing with more advantages than those who were in school before it came along. Let’s look at some direct impacts, but one note before we do: some of these were direct innovators of the iPhone while others were indirect industries or products that accelerated as a result of its existence.

Before the iPhone hit shelves, you had to buy an expensive calculator on your own and then sneak it into whichever test you wanted to cheat on.

It wasn’t practical, and, if you were like yours truly, you weren’t usually successful, thus forcing the, “Oh, I didn’t know” defense.

With the iPhone, the device was so small, it was hard to get caught when you weren’t supposed to have it, and that calculator — which improved over time — took on most of the abilities of the high-end Texas Instruments deals our algebra teachers made us buy as part of the class syllabus.

The iPhone voice recorder is often overlooked regarding its importance to impact on student life. And like the calculator, it wasn’t always onboard.

However, you could usually buy a decent one from the app store for a fraction of the price that a Sony would cost you.

Once the recorder became more commoditized, it was easy to record lectures for immediate playback in order to reinforce key concepts that might have been easily forgotten otherwise.

3. The iPhone changed how you communicate with classmates.

Way back in the Stone Age — circa 1995-2005 — students generally could not talk to one another during class.

If yours and your friends’ schedules were completely different, you had to wait until lunch. If you were at a larger school and had a split lunch, well, you had to make new friends.

Furthermore, the interactions you did have had to be — gasp — in person. Now some of us are old enough to remember when texting didn’t exist or when it was too annoying to actually do (looking at you, T9 function).

But along comes the iPhone, and everything changed!

Immediately you benefitted from the full keyboard texting application. Pretty soon, those thumbs got so quick you could write a term paper as easily on your iPhone as you could Microsoft Word.

Along the way, new communication channels arose like Facebook, SnapChat, Instagram, and Twitter. You no longer had to be at the mercy of the school’s Wi-Fi and your cheapskate dad’s limited texting plan if you wanted to keep the conversation going all 7-8 hours of a school day long.

To piggyback on the last one, part of why you could communicate more easily was that the iPhone and all the other smartphones it inspired forced data providers to beef up their systems.

3G became 4G became LTE, and since texting was so light on data requirements, you could send messages back and forth to your friends without testing the limits of your data plan.

With LTE, the speed of a data provider’s network was comparable to the early days of “high-speed Internet.” This made the capabilities of the iPhone virtually indistinguishable from the desktop you were probably using at home.

The results had further reaching implications than just texting and social networking. Suddenly it became easier to find out the answers to whatever questions you had on a whim.

Where many of us pre-iPhone people would either do old-school research on a piece of information we wanted to know or give up and assume we were dumb, you could just pull out the iPhone, open a browser, and become instantly smarter.

The App Store — first Apple’s iPhone and later Google Play — became about more than just games. While downloading the latest Angry Birds could be an enormous time-waster, students could also benefit from downloading a number of easy-to-use apps that simply weren’t available before.

Apps like ACT and SAT prep, for example. Rather than pay for costly study materials, you could work practice questions for either a fraction of the price or completely free.

That’s not to say you should ignore prep materials from the big companies — they still do a more thorough job of preparing you and keeping their fingers on the pulse of current test versions. But ultimately, you’re better off with the cheaper alternatives than without.

And that barely scratches the surface of the apps you can now download to help simplify and learn difficult concepts.

While “The Cloud” is its own animal really — and Amazon is just as much a leader, if not more so, than Amazon — the advent of the iPhone was a turning point towards cloud-based storage and access.

It was not apparent in the first iPhone model, but as the device and all its competitors advanced with new versions, it became more imperative for apps and hardware creators to have a common space in which content could be accessed from anywhere.

Today, it is not uncommon to have an app like Google Drive on an Android and an Apple device and be able to work for a while on one, leave it, and pick up on the other where you left off.

As a result, students have more choice in how, when, and where they choose to work.

The Cloud has also largely solved the storage problems of 3.5” floppy disks, flash drives, and limited storage in general; thus making it easier to back up your work. The iPhone created the demand that would eventually lead to it.

Again, the iPhone hasn’t always been the best at this piece of technology. Samsung’s phones, for a while, were besting it in megapixels and clarity.

But with the first iPhone, the inclusion of a digital camera quality means for capturing photos has become a prerequisite for every piece of hardware you can think of.

Today, the iPhone 7 Plus takes some of the most brilliant photographs and video you’ll see — putting many specialty digital cameras to shame.

What does this mean for the student? It means that it’s a lot easier to capture Power Point slides for later consumption and video lectures or group meetings for easier playback and understanding.

Of course, storage and data consumption can be a problem, but to compensate, the iPhone now comes in some models that have as much hard drive space as a traditional desktop or laptop. Mine is a 256GB iPhone, and I’ve come nowhere close to using all that storage space in spite of being a pretty frequent audio/video recorder and a notorious picture taker.

Being able to back up materials so easily to the Cloud or another computer or device has helped in part.

Ten years ago, free Wi-Fi at a restaurant, hotel, or retail store, was not something you could take for granted. That’s because the only people who really needed it were the laptop-toting digital nomads, who would set up shop inside a Starbucks all day.

As the iPhone matured the smartphone market in general, businesses began to see value in offering free Internet most everywhere because they realized there was a certain degree of marketing capital they could get out of it.

You’re there. You’re looking at your phone anyway. Why not ping your IP address with a too-good-to-say-no offer? The ancillary to this, for students, is that you can study anywhere and everywhere. This allows you to set up shop in a place that is more conducive to your creativity and productivity muscles rather than being forced to work wherever is available.

Furthermore, as screen quality, power, and mobile friendliness of content improves, you don’t have to lug around a heavy computer or books to make progress.

We just mentioned mobile-friendliness above. Well, it deserves its own space here. Back in the day, you had to bring along your laptop computer if you wanted to work on the go.

As mobile adoption increased, however, the need for content that looked and behaved well on the smaller screens increased as well.

As people read more news and articles on their mobile phones — today, mobile outnumbers desktop/laptop in use — creators realized their content needed to look and operate the part.

Today, it’s as simple to create a spreadsheet or term paper on your phone or tablet as it is a laptop or desktop. This “stripping down” lends itself to human mobility and makes it possible to get more time with material you need to learn.

And because the devices are so elegant and fun to use, you don’t feel like you’re working as hard as you probably are.

It cannot be understated how much greater computing power available through the iPhone and its competitors has helped student studies.

While YouTube used to be a website where you watched funny videos — okay, in many ways it still is — it has become something of a content depository where you can go to learn difficult concepts from how to fix the gutter on a house to how to code.

Wherever you are in life, there is information and recommendations available there that can help you solve many of your problems without ever stepping foot into a classroom.

The rise of the podcast has also made it simpler to pursue educational pursuits for both the betterment of your career and your life as a whole.

So there you have it, readers: the 10 most obvious impacts the iPhone has had on your education — and your ability to have one affordably — over the last 10 years of its existence. While we feel the list is pretty extensive, we’re not so naive as to think it’s complete. So now we ask you: what did we leave off? How do you think the iPhone or whatever your smartphone of choice is, has made you a smarter and more informed person? Sound off in the comments section below.