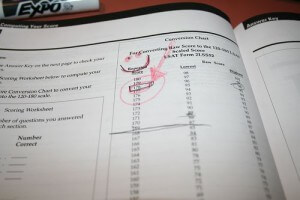 The Law School Admission Test (LSAT) uses sections on logic, reading comprehension, and verbal reasoning to determine whether you’re ready for law school. While it is not the only criteria for acceptance into a prestigious program, it is integral. It’s currently used in the United States, Canada, and by the University of Melbourne in Australia, plus an increasing number of other countries.

(Read: it’s not going anywhere, and the sooner you can make peace with that as a law school hopeful, the better off you’ll be.)

How you perform on the LSAT is important, not only because it’s one of the primary determinants for entry into any program, but also because it can only be taken three times in a two-year period. If your scores aren’t good enough, you could be sidelined by Father Time.

We went looking for LSAT tips that can help you end up on the high end of the scale. Here’s what we found:

One of the best ways of starting your LSAT studies off right is to get your hands on past exams. As many as you can, in fact. That’s what Ari Shahdadi, general counsel at Tumblr, said worked for him.

Shahdadi said that he took “one full timed exam every day in some interval the month before the LSAT,” adding, “I took one every day or every other day for the two weeks before the exam.”

Trevor Austin, a former LSAT instructor for Kaplan, agreed with the notion that past exams are helpful, but added that he was “a lot less aggressive in my prep regimen than Ari, doing two tests a week for two months rather than one every day.”

It’s often the most frequent piece of advice given on any test. In fact, we sometimes feel like we’re repeating ourselves. However, after talking to all the test takers that we have over the years, it continues to come up for a reason. People freak themselves out when they go in to take a professional exam, and if you’re guilty of that, Shahdadi advises you to stop it.

“Try to relax, even though your LSAT score is inordinately important in law school admissions, along with your GPA,” he added. “Not much else matters for better or worse.”

When you decide to take your first practice exam — and you should be taking practice exams whenever you’re ready — Shahdadi advises that you recreate a “test similar” environment to the best of your abilities.

“The LSAT really isn’t that difficult substantively, but you need to get used to the pacing and the kinds of questions, particularly if the logic games section is going to throw you off,” he explains. “Forcing yourself to take timed exams in ‘test similar’ situations is overall the best way to prepare for any standardized test, but especially the LSAT.”

We’ve saved you the trouble. Here’s a quick list.

4. Focus on the sections you got wrong during the practice portion.

Austin agreed it was important to recreate the testing environment, but also noted it’s not enough to get used to the pacing and the kinds of questions the LSAT will throw your way, stating that “the most valuable thing for me was going in depth over the questions I got wrong.”

“I can’t speak for everyone, but I had a strong tendency to fight the question and say that my ‘wrong’ answer was really the right one, particularly on the reading comprehension sections,” Austin said. “Of course, you can’t argue with a multiple choice test. Making a mental shift from trying to put down the ‘right’ answer to putting down the one the examiners are looking for will lower your blood pressure about five points.”

What makes the LG section so challenging is that rules do not allow for a single correct set of relationships among all elements of the game. You are tested on your ability to analyze the range of possibilities found within a given set of rules. Individual questions often add rules or change the terms of existing rules. This action requires you to undergo a quick reorganization of known information on the fly.

To make the most of your score on this section, law student Michael Sinanian believes that speed is key, advising you to “Improve sheer mental speed by repeating games and pushing yourself.”

“Top scorers often do each game two or three times. They just push for faster and faster times on each attempt. You want a 180? Drill like you deserve it.”

He also recommends a “duck-hunt,” in which you quickly scan games to ID each kind and decide what approach to take and how flexible you can be.

Austin advises you to really give the LG section your all because “games are the most learnable section of the LSAT.”

“If they’re your weakest section, some focused drilling there, and perhaps a games-specific study book, can really help you out,” he explains. “In fact, I’m tempted to advise people to drill on games if they’re missing any games questions, even if it’s their strongest section, just because it’s the most fomulaic section, and the easiest to make improvements on.”

Of course, along with these LSAT tips, you should also keep in mind our resource here at 4Tests.com, where you can take a free LSAT exam without any obligation or hassle. The more practice that you get in anticipation of your big day, the better you’ll score. It really is that simple. Have you taken the LSAT? What are some tips that worked best for you?