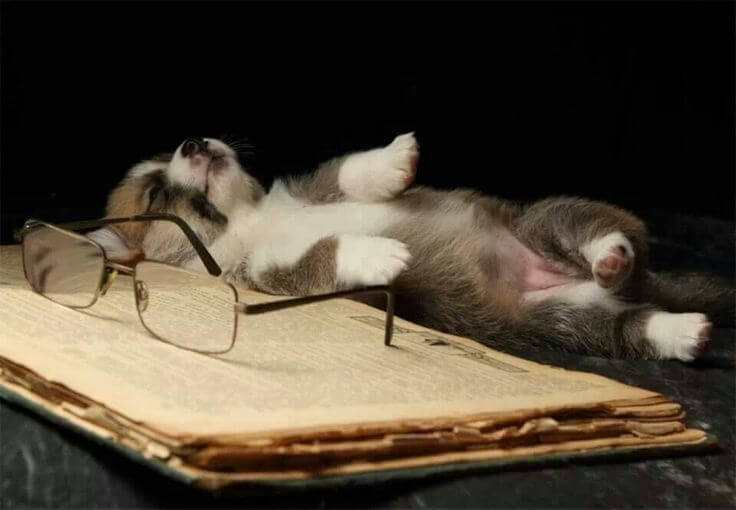 Studying too hard can be just as negative as studying too little if it starts to take over your life. Yet every year, millions of college students across American — nay, the globe — press themselves to the breaking point. Why do they do it? What other choices do they have? And what are some signs that you’re pushing way past the point of productivity? Let’s take a look!

As the hours of your life turn in to days and months and eventually four years, with increasing levels of difficulty as you advance in your major, you’ll notice the need for more study time. If you’re “doing it right,” you won’t have time to be bored or watch TV or enjoy anything about your life outside of the classroom. Once you’ve reached this point, it’s not uncommon to feel involuntary twitches just behind your eyeballs that make it feel as if they could pop out of your head on their own at any moment. Feeling this yet? If so, we want you to do something for us. Close the book. Shut off the computer. Take a nap or let your eyes rest on something that doesn’t have huge walls of text or high expectations. In other words, ease up; you’re studying too hard.

Another common sign that you’ve been at the books a little longer than what most would consider healthy, is when you look up from your studies and see the time: 3 p.m., and you still haven’t eaten lunch! This is common in work as well. For example, I once had a boss, whose wife had to call him every day around that time and ask if he’d eaten anything yet. Ninety percent of the time, he hadn’t. It’s okay to enjoy what you study or to simply try and get more done with the time that you have. But you have to take care of yourself if that study time is to be worth anything down the road.

If you’re brushing your teeth anywhere in the p.m., then something is wrong. You’ve either been up all night studying and had to sleep in, or you got on a roll after getting up early and forgot what time of day it was. Either way, if you start to smell your own breath, it’s time to leave your desk and make a beeline for the sink, where (hopefully) the tube and brush are waiting. After that, don’t forget to throw in a shower and a change of clothes and maybe some deodorant and a hair style. All of these activities may seem superfluous when you should be studying, but they actually help you recharge your batteries, so you can return to the books later and turn in a better performance.

No, we’re not talking about the word game. We’re talking about that point in time when your eyes can no longer focus on the words that are in front of them. Generally, this occurs because you feel overwhelmed by the sheer amount of study time that you need to put in, and you’ve failed to pay attention to your body’s cues that maybe enough is enough (for now). Words should be strung together in a coherent fashion horizontally across the page before breaking to the next line for more of the same. They’re not meant to be a blurry, incoherent mess, and if that’s how they look to you, then again, you’re studying too hard.

We’re not knocking classmates as friends. One of my best friends in the world was in several of my upper level English courses in college. It stands to reason that if you have the same major, you may have many of the same interests outside of class. Even so, most people are more diverse than this, and if the only ones you find yourself spending any time with, are the people that are going to be sitting right next to you taking the test, then you’ve probably got too much school life and not enough personal life. Same goes if the topic of conversation constantly comes back to something that might be on the test. Step away from the books!

I don’t know about you guys, but whenever I have a lot of work to do, one of my first steps is to head over to Facebook and staring through the screen for 10 minutes. I wasn’t sure why this happened to me until a friend pointed out that I’d probably been “at it” for too long without giving my brain a large enough break to recuperate. That made much more sense, and once I realized he was right, I decided to step away from the computer and have a quick walk or a trip to the coffee pot. Unfortunately, 10 minutes can turn in to two hours if you don’t get away from the computer.

This one needs little explanation. It’s what happens when you study the same thing two or three times in a row without realizing that’s what you’re doing until you get about halfway through the information. At this point, you’ve officially lost contact with your alertness, and the chances of getting anything accomplished, are pretty much non-existent.

Have a lot of friends wondering why you haven’t emailed or texted them back? In today’s culture, if you can go long enough to amass more than two unread text messages or five emails, then you’re probably wrapped up in something else. We’re not going to say you’re studying too hard at this point, though. Most return correspondences can wait. But you’ve got to take a break sometime, and if the unread messages continue to pile up, chances are pretty good that you’re not.

Too much of a good thing can always turn bad without the proper balance of life thrown in for good measure. Remember this as you crack open those books, and if you start to realize you’re studying too hard, take a deep breath, a step back, and live to fight another day.