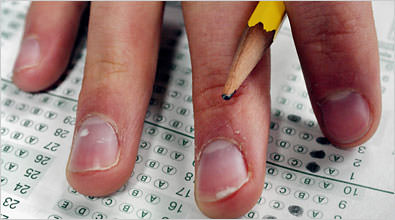 The College Board has admitted that its SAT exam doesn’t focus enough on key academic skills required to make it in the 21st Century, according to a new article from the New York Times. With that in mind, the organization is embarking on a number of changes that will result in a significantly altered assessment. Some of the major changes that will be made include the following: the elimination of obligatory essays, ending the “guess penalty” that detracts from your score for guessing incorrectly, and removing obscure vocabulary words.

According to College Board president David Coleman, the SAT and the ACT “have become disconnected from the work of our high schools,” adding that his organization would be implementing new programs to help low-income students, allowing them to apply to four colleges at no cost. College Board will also team with Khan Academy to offer free online practice problems from archived tests along with instructional videos on how to solve.

The SAT has long taxed test-takers with a list of archaic, uncommon words, and according to Coleman’s Wednesday announcement, that’s about to change. Instead, students will need to study words like “empirical” and “synthesis,” as well as other words that commonly appear in college courses.

“The math questions, now scattered widely across many topics, will focus more narrowly on linear equations, functions and proportional thinking,” the NY Times reported, adding that the use of a calculator “will no longer be allowed on some of the math sections.”

Students will have the option to take the new SAT on both paper and computer and scoring will fall back to the classic 1600 scale, “with a top score of 800 on math and what will now be called ‘Evidence-Based Reading and Writing,’” the Times noted.

(An optional essay portion will be scored separately.)

While it’s unclear whether Coleman’s assessment of the ACT as outdated is accurate — after all, the exam is considered more in line with high school curricula and it has overtaken the SAT in the number of students who take it each year — one thing is certain:

The SAT is in need of a change.

And it looks like those changes will arrive in the spring of 2016, which is the time period when the “new and improved” SAT will launch. Still, as the Times notes, the changes “will not quell all criticism of the standardized-test juggernaut.”

“Critics have long pointed out — and Mr. Coleman admits — that high school grades are a better predictor of college success than standardized test scores,” writes the newspaper. “A growing number of colleges have in recent years gone ‘test optional,’ allowing students to forgo the tests and submit their grades, transcripts and perhaps a graded paper.”

Coleman admitted that, for many students, the tests are mysteriously graded and constructed, and “filled with unproductive anxiety.” He also doesn’t believe they “inspire much respect from classroom teachers,” with “only 20 percent” seeing the college-admissions tests as a fair measure of the work their students have done in school.

Coleman’s plans to revise the SAT are certainly nothing new. When he was brought on to College Board in 2012, an overhaul was high up the list of his to-dos. From the very beginning of his tenure, he has made it known that the essay test — added in 2005 — had to go. His repeated goals was to make the test “mesh more closely with what students should be doing in high school.” He also wanted to even the playing field among high- and low-income students, stating that high-income students often have the benefit of “intense coaching and tutoring” that isn’t available to poorer students.

“It is time for the College Board to say in a clearer voice that the culture and practice of costly test preparation that has arisen around admissions exams drives the perception of inequality and injustice in our country,”

Coleman said during his test-changes announcement. “It may not be our fault, but it is our problem.”
Interestingly, Coleman’s new plans for the SAT are not unlike the ACT, which he included in his criticisms. One minor difference: the ACT has a science section; the new SAT will not, though it will include a science passage on the reading test. However, both exams will now make the essays optional, and neither will punish test-takers for bad guessing.

The new SAT will clock in at 3 hours and 50 minutes with the essay — three hours without — and it will be redesigned “with an eye to reinforce the skills and evidence-based thinking students should be learning in high school, and move away from a need for test-taking tricks and strategies,” Coleman said.

The Times added that on some portions the students will be asked not only to choose the correct answer, but also to justify it by choosing the quote from a text that provides the best supporting evidence for their answer.

“The revised essay, in particular, will shift in that direction,” the newspaper added. “Students now write about their experiences and opinions, with no penalty for incorrect assertions, even egregiously wrong ones. Going forward, though, students will get a source document and be asked to analyze it for its use of evidence, reasoning and persuasive or stylistic technique.”

While America’s tendency to over-test high school students probably isn’t going anywhere, the new SAT changes at least demonstrate that testing organizations are able to look at the lay of the land and realize things are not as they should be. Even if politicians never get off their testing bandwagon, the self-assessment of organizations like College Board is a hopeful sign. What do you think of the new testing changes of the SAT — needed or not? And do you think that Coleman’s criticisms of the ACT are valid? Share your thoughts in our comments section.