Campus Safety In 2014: Leaning On Your Peers 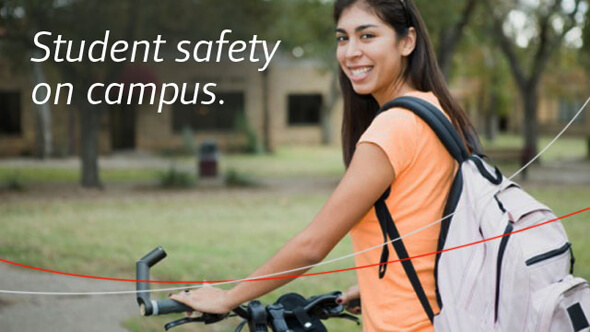 As you begin a new year of college, make sure that you don’t let your studies, socializing, and future plans, conceal the need for campus safety. Decisions can be made on a college campus that end up following you the rest of your life. You want those decisions to be good ones.

In a recent article for NPR, Laura Starecheski reminded students attending this semester that the company you keep is very important. From the report:

Many forces can drive a male college student to commit sexual assault. But one of the most important may be the company he keeps.

“One of the things that matters most to boys and emerging adult men is the opinion of other men,” says John Foubert, a researcher at Oklahoma State University who studies rape prevention among young men.

Starecheski reminds us that one of the most famous studies on campus sexual assault perpetrators was conducted by psychologist David Lisak in 2002. Called the “undetected rapists” study because few campus rapes are ever reported, much less prosecuted, he searched for sex offenders hiding in plain sight at the University of Massachusetts campus in Boston.

The survey examined the behaviors of 1,800 men, asking them a wide range of questions about their sexual experiences. To learn more about sexual assaults specifically, he asked, “Have you ever had sex with an adult when they didn’t want to because you used physical force?” The results, Starecheski writes, shocked him.

More from the report:

All told, 120 men in the sample, or about 6 percent of the total, had raped women they knew. Two-thirds of those men were serial rapists, who had done this, on average, six times. Many of the serial rapists began offending before college, back in high school.

Other studies at colleges and in the military have since found similar numbers — usually somewhere around 10 percent of men admitting to either an attempted rape or a rape, with a significant proportion of them reporting a history of repeated offenses.

Together, the 120 men in Lisak’s study were responsible for 439 rapes. None was ever reported.

These findings should shock and disturb anyone who reads them — not only parents of students attending college, but the students themselves. While you definitely want to make the most of your time in college and have a lot of fun in addition to getting an education to build your career, you can’t assume that everyone around you has the best of intentions. This is especially true for college freshmen, who don’t know the ropes. When you’re new to a campus, it’s easy to get caught up in the wonder of it all and the newfound freedom of being your own decision maker. But whatever you do, don’t be so quick to give your new friends and acquaintances the benefit of the doubt. Here are some suggestions for college freshmen, both women and men.

While sexual assault is certainly not exclusive to women, they are victimized by it more often than men, and should be on guard against strangers, particularly of the opposite sex. You can’t assume that because someone is your age, that they are incapable of doing something heinous. Stick with people that you trust in your first year. Try to nurture those old high school friendships, or build upon them, even as you invite new people into your circle of friends.

Furthermore, when it comes to parties and wilder social situations, make sure that you coordinate with your friends. You’ll want to stay away from substances like alcohol and drugs altogether. Even in cases where the substance is mostly legal — as with alcohol — it’s usually illegal for anyone under the age of 21. Therefore, that means you shouldn’t be doing it, period.

However, if you do decide to break the rules, don’t fly solo. Make sure you’re with people you trust, and that you’ve got a designated friend who doesn’t partake in the goings-on, but is there to ensure that you are not taken advantage of. Stay away from one-on-one situations where you are vulnerable.

Don’t tolerate the objectification of women or the sexual degradation of any human being. Choose friends who are respectful, and who have a good moral code, so you don’t place yourself in any precarious positions.

As the studies above indicate, the company you keep can cause you to make decisions you may not have otherwise made. Only thing is, you’re in college now. If you make one of these “contingent mistakes,” you’ll have to pay the piper for it. There are no overly lenient juvenile laws there to protect you.

A sex offender in college is a sex offender for life, and that’s something that will haunt your career, your social life, and your family, as long as you live.

Lastly, if you know of a crime that has been committed, alert authorities. By forcing these shadowy behaviors into the light, you can help change the unfortunate reality that now exists for so many young women enduring their pain in silence.

The narrative that haunts college campuses today regarding sexual assault and other criminal behaviors needs to be changed. Students are in a position to do more than just build knowledge and work toward a career. They’re in the position to stand up for a better society and to do their part in supporting those who may not have a mouthpiece. Please remember this as you start your school year, and let 2014 be the year that we stamp out this sort of thing for good. Best of luck!