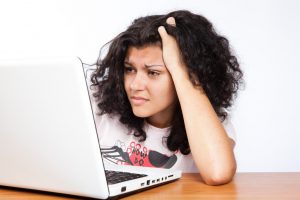 Chegg’s annual “State of the Student Report” for 2018 has been released, and it paints a pretty stressful picture regarding the modern college student. The survey was commissioned by Chegg, Inc. (NYSE: CHGG), and it surveyed 1,000 students across a spectrum of demographics and college students.

It found high anxiety and stress coming from economic, political, and social pressures. In the following article, we’ll be discussing some of the key findings, as well as offering some tips on what you can do about it.

The State of the Student Is Stressed

Chegg, based in Santa Clara, Calif., is a company that specializes in homework help, online tutoring, scholarships, and internship matching. Using its vast supply of student access, it was able to compile the research from June to August of this year. There were 1,001 participants altogether.

According to a press release, “the report provides a sweeping view of what today’s college students are experiencing in their daily lives, covering such areas as financial issues, anxiety and mental health, campus safety, inclusivity and discrimination, political divisiveness and their outlook on the future.”

Anxiety was found to be “a prevalent issue in college life” with around “60 percent of students” saying they are anxious “frequently” or “all the time.” Sixty-six percent were worried about experiencing an incident of gun violence on campus and 68 percent were worried about their futures (“frequently” or “all the time”) – “yet 63 percent said they have never taken advantage of their college’s mental-health resources or are unaware that they exist.”

“College students are facing many of the same pressures that adults face. They’re stressed by work and finance, plus they deal with the additional urgency of fitting in socially,” said Dan Rosensweig, president, CEO of Chegg. “That may not seem particularly new, but today’s complex economic, political, social and tech-dominated landscape has accentuated the tension and burden students feel.”

Students were mainly worried about their financial situations with 66 percent (or two-in-three) saying they could not comfortably afford college housing. Thirty-seven percent “have felt social pressure to spend more money than they can afford, 34 percent find it challenging or impossible to afford food, and 73 percent work while in school.” On the other hand, almost three-in-four (73 percent) said they felt optimistic about finding a job that will support them after college, and 35 percent said they were having “the time of their lives.”

Some other brow-raising findings from the State of the Student Report include the following (special thanks to Mikey Collard and Method Communications for the summation):

That’s a lot to take in. We all handle these sorts of stressors differently, and different stressors will leave a longer-lasting impact on our lives. But with these in mind, here are some tips to deal with the frustrations.

We’ll use some of the key findings above as a jumping-off point. But even if they don’t apply to your particular situation, these coping mechanisms should help.

1. Do Not Neglect Sleep

Look, we know how it is. You feel the weight of the world closing in on you. Not enough hours in the day to do everything you’ve got to do. Gotta stay up as long as humanly possible.

It’s easy to think to throw more time at the problem will help, but that could not be further from the truth. The longer you go past your breaking point, the more the quality of your work and studies declines.

You can avoid the all-nighters with a little basic pre-planning. At the start of each semester, take a couple of hours to sit down and build a calendar of all your important exam/project due dates. Consider using an app like Trello or a spreadsheet. Make it cloud-based so you can instantly make updates no matter where you are. Set reminders.

By having awareness of important dates, you can formulate a plan so that nothing ever sneaks up on you. This allows you better control, and use, of your time. And it keeps you from having to sacrifice a night’s sleep.

Whether you’re one of the 43 percent of all students or the 61 percent of LGBTQ students who admit to feeling “very lonely” at college, you have to get out of the dorm room and find your tribe.

This is easier to pull off today than it was 20 years ago because you can first use social media to connect with others of like interests online. Don’t keep that relationship online, though. Get it out into the real world and live your life in the brick and mortar, not the screen of a smartphone.

3. Repeat These Words as Your Mantra: ‘I Am Not in Love’

There’s a good reason why the number of people who claim to fall in love at college is smaller than the number who’ve made a best friend. The answer: it’s easier to make friends than to find love. And it should be. Romantic relationship love should be hard-won and easily-given, not easily-won and hard-given.

In other words, you need to be extremely choosy with your long-term romantic entanglements because there is so much more at stake. There is the possibility of children. The reality of having to make every decision for the rest of your life (or relationship) to the benefit of you both. Not just one.

And quite frankly, years 18-22 of your life are far too formative to be making rash decisions that could impact you for decades to come. You should take your time and remind yourself that, even though you feel very strong emotions for someone, that doesn’t mean the emotions have morphed into true, long-lasting, meaningful love.

For that to occur, you both have to go through the fire and be tested. You have to experience fights and challenges and calamities. You have to mutually believe the other person is worth uprooting your life and world over.

Until you do all that, it’s just really strong “like.” So don’t let it influence you toward foolish decisions.

4. Stay Away from Your Professors

The #MeToo movement has raised needed awareness to the reality of sexual assault and abuse of power. But when you get into a young adult having consensual sex with their professors, the lines can get pretty blurry. Remember, you’re still forming mentally. That continues until about the age of 25.

Will 25-year-old you look back at the encounter as something in which the older professor should have known better (answer: yes, they should know better). It gets a tad confusing, and it can leave mental and emotional scars.

The best thing to do is to keep the student-professor relationship that. Don’t get involved with them romantically, especially when you’re in their class. If you both have a real connection that lasts into your post-formative years, you might be able to reconsider. Anytime before then just muddies the waters for you both.

5. On Discrimination, You Do You

Discrimination still exists in a variety of forms. Thankfully, we now live in a society that roots it out and shames it at every opportunity. While bigots and racists still operate in a variety of ways, they live in fear of being exposed as a bigot or racist. That’s an advantage, even though it may not seem like it when you’re getting discriminated against.

It’s an advantage for this reason: it allows you to “do” you. By focusing on being the best you can be, you have the opportunity to seize control of your destiny as old ideas and stupid mindsets fade away with time.

That said, make sure to report discrimination when you see it. But don’t let it stop you from meeting the goals and objectives you have set for yourself.

6. Learn to Break Bread with Others

Yes, 73 percent of Republican students believe the country is going in the right direction, compared to 24 percent of Democratic students. And you know what — in each viewpoint, they’re both right. In other words, there will always be people who disagree with the path of the country based on their political predispositions and viewpoints.

The answer is not to shut up or shut down the other side. It’s to focus instead on bringing about the change you would like to see in a world that allows for dissent. Part of being in college is knowing how to do this, and you’ll never get there if all your friends think the same way you do.

Also, when you allow other opinions to exist inside of your world, you’ll find that others are willing to listen to what you have to say and be open to some of your ideas. Remember: we’re not as different as we may seem. Everyone wants happiness. We just have a different idea of what that is.

Sticking with the stress tips listed above won’t solve every problem that you face, but it will put you in a better position to cope with the different forms of stress as they occur.

The Methodology of the State of the Student Report

The online research for the State of the Student report was conducted using empaneled respondents provided by Research Now. The sample for this research was collected in June and August 2018. All of the 1,001 students were currently enrolled in U.S.-based colleges. To guarantee the sample was reflective of the college population at large, the data were weighted to match data from the U.S. Census. Data points used for weighting include gender, age segment, college type (2-year vs. 4-year) and school attendance (full-time vs. part-time). More info or a download of the report can be found here.