Cost Of Education: 12 Ways To Lower Your Debt Without Sacrificing Your Future

The cost of education in America, like the cost of everything else (but TVs), continues going up, and with it, the burden students face isn’t getting any lighter. But even in a system run amok, there are still ways to reduce costs without sacrificing your future. Here are 12 that’ll help you through with a little more money in your pocket. 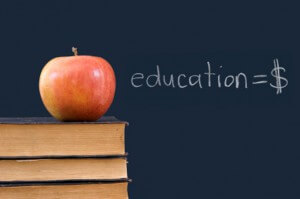 1. Seek scholarship opportunities at the local, state, and national levels.

The opportunities for academic scholarships in your area and the nation as a whole are staggering. Of course, your best chances are at the state and local levels because most states try to make education a heavy priority and so they’ll allot significant funding to students, who are making the grade. Thankfully, your pool of competition isn’t quite as large the closer to home you are. At the national level, you find yourself competing with students from all over the country. Still doable, but more of a challenge. Ultimately, you’ll want to pursue all three options. To do so, your high school counselor’s office is a great place to start.

2. Live at home as long as possible.

A two-bedroom, two-bath apartment in a state as cheap as Arkansas can run north of $600 per month. That’s before you get to energy expenses. In heavily populated areas like Texas, California, and New York, it can be significantly higher. And while you may still be able to find a job and keep the lights on each month, that can be rather difficult without a roommate. You could always use an app like Roommates to find the right person, but why do that if you’ve still got the option of living at home and paying nothing (or at least a very minimal amount of living expenses). To pull this off, you’ll need the approval of your parents, but that’s often a lot easier to come by than a friend or stranger, who is always late getting you their half of the rent.
3. Pay attention to tuition costs, fees, and living expenses.

A university’s tuition costs are but a small part of what it actually costs to attend. There will also be room and board fees (if you live on campus) and book costs. If you don’t live on campus, there’s the added headache of finding a place that’s cheap enough for you and a potential (group of) roommate(s). You’ll also need to provide for your physical well-being off-campus, which means eating out or trips to the grocery store. Both can be expensive, especially when you live in a location where a gallon of milk costs $5 instead of $3.50.

4. Excel in sports, music, or another extracurricular activity.

Studies aren’t your only opportunities for getting scholarship money. You can also find a number of opportunities if you’re good at football, basketball, playing an instrument, or singing in a choir. It’s not uncommon for students to hodgepodge their funding sources from choir scholarships, partial rides to play football at a university, and a 25 or higher ACT score. Try to exhaust every possibility when seeking scholarship funds.

5. Apply to a work-study program.

If the idea of massive student loan debt is a turn-off, you can always try to make some money by taking on a work-study situation. That could mean applying to a resident assistant (RA) position, working the check-in desk at your dorm, or applying to work within your college major’s department. Drop by your college’s financial aid service to learn more about these opportunities.
6. Take online courses.

As online courses and MOOCs become more common (and technology more affordable), public and private universities will no longer be able to inflate or hide the costs of doing business. A further mingling of technology and education will mean that costs of online courses will become more known to the general public, and that means an inevitable drop in what it costs to take a class online. By positioning yourself to take as many online courses as you can, you should be able to share in this price reduction and make your own schedule more flexible for the pursuit of a part- or even full-time job, thus making higher education more affordable.

If your goal is to borrow as little money as possible (or none at all), then you’ll want to pursue the Federal Pell Grant as much as you can. This is an especially attractive option for families, who don’t make a lot of taxable income.
8. Stay in-state as long as you can.

The difference between in-state and out-of-state tuition can be staggering. If you’re desperate to get out of your state, then it’s best to either establish in-state residency before attending the college of your choice or sticking it out where you are until the undergraduate degree has been attained. Unless you’re going to an Ivy League school or something similar, undergrad degrees aren’t much different from one another throughout the country. It’s not until you move past that to grad school or beyond that it really starts to matter. So defray those costs as much as you can by staying in-state for the majority of your training. Excel at what you do. Then, worry about where you’ll be landing your master’s and doctorate.

You’re never too early to start exploring your passions. If you haven’t gotten it worked out by the end of high school, that’s okay, but you should probably kick the self-examination into overdrive. You’ve got two years worth of general studies you’ll need to get out of the way before pursuing a more direct path to your four-year degree. Take these two years seriously when it comes to finding what interests you. Too many people rack up massive amounts of debt in their undergraduate years because they can’t (or won’t) decide the best educational pathway for them. You’ve got plenty of time to decide as long as you’re taking an active role in your education now. Don’t double or even triple your debt by being indecisive.

10. Get your prereqs out of the way at community college before transferring to an in-state, four-year university.

Not only should you try to keep costs cheap at the undergraduate university level, but also you should consider holding off that step and attending a community college for the first two years — long enough to get your general ed requirements out of the way. Community colleges are significantly cheaper, and they offer the same standard of education as you work toward your associates degree. By switching to a major college or university for the last two years of your undergraduate degree, you can really cut back on the cost of education prior to graduate school.

11. Use online sources for books and other materials as much as possible.

School bookstores have always seemingly had carte blanche to rip off students with overpriced books and underpriced buybacks. Luckily, the Internet has changed all of that, allowing you to search online for better deals on new and used books. You can even rent books for a fraction of the purchase price. Using online sources as much as possible will literally save you hundreds of dollars every semester.

Finally, don’t think you have to go to college or university just because everyone else seems to be doing it. While you should not be resting on the laurels of a high school diploma / GED equivalent, you don’t have to sign up for a pricey university when there are options like certificate training. By learning an in-demand skill — such as building websites, for instance — you can work for yourself and have access to a steady stream of clients. Furthermore, a Georgetown University report from 2012 indicated that an IT certificate could in many cases, earn you more than a bachelor’s degree. And most (96 percent) of the certificates were awarded by private for-profits and public two-year colleges — hardly a bank-buster in either case.
Which of these methods has worked for you, and what other tips do you have for helping reduce the cost of education? Share your thoughts in the comments section below.