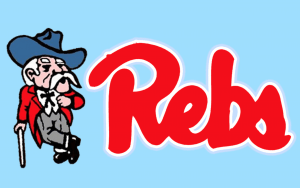 For decades schools across the country that have had the “Rebel” nickname or some other reference to the Southern Confederacy have contemplated name changes against much opposition from their residents. But in one former Confederate state, action has been taken.

The Fort Smith, Arkansas, school board voted to remove the Confederate flag, the “Dixie” fight song, and their Rebels mascot — affectionately called “Johnny Reb” — from Southside High School. It was a decision reached in response to the tragic Charleston, South Carolina, shootings that left nine people dead at a longstanding black church.

The shooter, Dylann Storm Roof, was a supporter of the Confederate flag, and as a result of the fallout, schools like Southside have been deciding that it’s time.

5NEWS reports that the replacement will be ready by the 2016-2017 school year. The site also sheds a little light on some of the challenges that the students and administration will face between now and then.

More from the report:

“The board said they will turn to students for help in picking a new mascot and song.

“‘We said it will be kind of fun to have a contest to pick the new songs,’ Susan McFerran, one of the five school members who unanimously supported the measure, said.

“The school will have to make changes to some of its uniforms.

“The school board will hold its final vote on the decision at its regular board meeting on July 27 and will be open to the public.”

And if you think for one minute that that won’t be a lively public meeting, allow us to point you toward some of the comments received by Fort Smith’s online news source The City Wire.

“It saddens me to see the school board have a closed door knee jerk reaction to the tragic events in South Carolina,” said Brad Kohler in comments to the news source. “The school board didn’t put their finger on the pulse of the community before making their decision. I have a daughter that will attend Northside this year and a daughter that will attend (Southside) in 3 years. I showed both of my girls the SHS Johnny reb logo tonight and asked them what that symbol meant. They both answered Southside. It is a tradition and heritage of this town. Today’s generation doesn’t see it as a negative or racist symbol.”

“If political correctness is the goal than [sic] the best approach may be to rename both high schools so that there is no reference to north or south. After all, the reference to ‘North’ may be offensive to those from the South who suffered mightily at the hands of the Yankees. Perhaps select names of early community leaders so that the newly-branded names would correspond with the western theme. While at it, select a male for one and a female for the other. This sanitization should appease all seeking political correctness and in the essence of fairness would create an even playing field. It remains to be seen, however, if this Western-theme will eventually fall from favor as the Western expansion was conducted at the hands of a government who slaughtered native Americans. Heaven knows the Native Americans suffered no less than others.”

“MYTH – Only the North had men of color in their ranks. … FACT – Quite simply a major falsehood of history. Many blacks, both free and of their own will, joined the Confederate Army to fight for their beloved Southern home. Additionally, men of other ethnic extraction fought as well. Oriental, Mexican & Spanish men as well as Native American Indians fought with pride for the South. … Today, many men of color are members in the heritage group SCV – Sons Of Confederate Veterans. These men of color and pride rejoice in their heritage. The continued attacks on the Southern Nation, The Confederacy, and her symbols are a terrible outrage to these fine people. These attacks should be denounced with as much fervor as those who denounce the South.”

“Where was the public upset about the SHS mascot? I haven’t heard any complaints and I’m a graduate of the school. So stupid. What a spineless, fearful age we live in when we are to forget heritage and history. To think a murderous punk could have this much influence nationwide is disgusting. He won, he got his wish — he’ll live forever in infamy.”

“I’m sorry,but the next thing we know,they’ll be wanting to take down all the Historic Statues of our Civil War ..we’re all sorry about the Civil War,but it happened..The negroes were freed..The Confederate Flag is a part of history..All the men and women fighting now and before,for OUR freedom,was and is fighting for is OUR AMERICAN FLAG going to go next ?? This is getting out of hand.”

You get the idea.

The ongoing debate brings up interesting questions about history and hate. Many of these commenters seem passionate in their statements and they may honestly believe that the Confederate flag stands for history and heritage. It’s may not be considered a symbol of racism to them. Can a single symbol have different meanings to different people and both be considered legitimate? Should one meaning trump another meaning and lead to the exclusion of that symbol from public acceptance at the expense of one side over the other? And as one commenter mentioned, is removing the Confederate flag truly a sign that Dylann Roof “won” with his violent act, or is it the exact opposite? 4Tests.com does not support racism in any fashion, but we would love to hear your comments on these controversial matters.