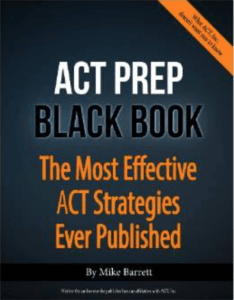 The ACT Reading part is an often controversial part of the test because you’re essentially asked to choose the “correct” answer to a reading passage where there can be multiple interpretations. Nevertheless, it is possible to understand how the questions are designed and, in so doing, finding the key that unlocks the entirety of the exam. In other words, if you do well on the ACT Reading part, then you should be able to use the same principles of deductive reasoning to transfer that success to other parts of the test. As Mike Barrett says in his excellent book, ACT Prep Black Book: The Most Effective ACT Strategies Ever Published, it’s possible to get “Reading questions with correct answers that are just as bulletproof and inarguable as correct answers on the ACT Math section.”

“In fact, the ACT Reading section is the best place to start understanding how the test really works. If we can see the standardization at work here, it’ll help us understand the rest of the test.” He also notes that he always likes discussing this section first because “the secret skill required to beat the ACT Reading section is the single most important skill on the entire test.”

“If you can really, truly understand and master this skill, you’ll be able to get a great score across the board, in every section,” he adds.

The skill that Barrett is talking about is reading with comprehension. You have to be able to hone in on a passage, be careful, methodical, precise, and clear in what it’s saying. While in high school you’re often encouraged to explore the meaning of a passage or “infer” it, the ability to find correct answers on the ACT Reading section depends on how well you can find supporting details that are specifically stated in the passage. These are the “bulletproof” answers that Barrett is talking about, and while it may make you seem uncertain because you’ve always been taught to read with an interpretive eye, he’s dead-on correct.

As an example in his book, which you can buy here, he shares the following.

“Imagine you’re in an English class discussing a passage from a book you’re currently reading. In this passage, the main character is very upset. She’s just learned that her cousin has a serious illness, and the passage describes how worried and concerned she is for his health. Your teacher asks the class for their opinions on the main character’s emotional state. You raise your hand and say something like, ‘I think the main character seems troubled and conflicted.'”

“Your teacher asks, ‘Conflicted? Why do you say conflicted?’ You then go on to explain that you were in a position like this once and you remember feeling conflicted, so you think the character probably feels conflicted, too. Your teacher thanks you for your contribution, and probably agrees that, yes, it’s possible the main character in this passage might feel conflicted. This sort of open interpretation is often encouraged in a classroom, but it’ll cause you to miss a lot of questions on the ACT.

“We’ve talked about the idea that all ACT questions have to be ‘bulletproof’ and objective in order for the test to serve its function in the admissions process. The only way for a correct answer on an ACT Reading question to satisfy this requirement is to avoid any kind of interpretation, because interpretation is always subjective. And the only way for a correct answer choice to refer to a passage without interpreting it is to restate some element of the passage exactly.

“Any other description of the text would necessarily involve interpretation, and then the correct answer wouldn’t be objectively correct anymore. So if the same hypothetical passage we were just talking about appeared on an ACT test, and you chose an answer saying that the main character felt ‘conflicted,’ you’d get the question wrong, even though your English teacher would probably accept that analysis. If an ACT passage describes someone in a difficult spot as upset, worried, and concerned, then we can choose any answer that means exactly the same thing as ‘upset,’ ‘worried,’ or ‘concerned’ … but we can’t pick a word like ‘conflicted’ unless the text specifically states that a character feels two different emotions at the same time that seem to go against each other, because that’s what the word ‘conflicted’ literally means.

“On the other hand, if the passage said something like, ‘I was worried about my cousin’s illness, but I was also optimistic that he was strong enough to overcome it,’ then you could pick an answer choice that described the character as ‘conflicted,’ because being ‘worried’ and ‘optimistic’ are two conflicting emotions. Further, the ideas of those emotions would be connected by the word ‘but,’ which shows that the speaker considers them to be conflicting ideas. … On the ACT, it’s not enough that being worried or upset is a negative thing, and that feeling conflicted is typically a negative thing that could kind of go along with the idea of being upset and worried. It doesn’t matter that you might feel conflicted if you were in the position described in the text, or that you think you could defend your reasoning in a classroom discussion.

“The only thing that matters in ACT Reading is that the answer you choose is supported directly and specifically in the text, in a way that requires no interpretation. If an answer choice is supported by the text in that way, then it’s right. If it’s not, then it’s wrong.”

Again, give Mike’s book a look. It’s enrolled in the Kindle Unlimited program, so you can read it for free for however long you need it with a $9.99 subscription, or you can purchase it in paperback for around $20. Here’s that link again.

The ACT Reading portion can really help you unlock your full potential on the test as a whole. If you’re able to start judging questions from the most objective point of view that you can and place a heavy focus on details, then you’ll be well on your way to dissecting and answering questions with efficient accuracy. Best of luck as you plan for the next test date, and make sure to get early registration in by August 7 for the September 12 session!