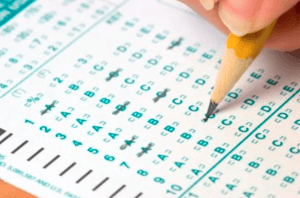 Standardized tests are perhaps the most hated academic tools around, not because people hate being assessed per se, but because they’re just burned out on them! From a very young age, it seems like someone is shoving a Scantron under your nose and telling you not to darken outside the circle. (At least that’s how it was way back in the Stone Age when I was in high school. And we had way fewer tests to worry about!)

One of the biggest concerns that I usually had was not finishing in time. How can it be a test of my true knowledge when I’m not allowed to do my best on every question, I wondered. (I’ve since learned that it’s not always enough to be right in life; you also have to be efficient.)

Fortunately, no matter which of the standardized tests you’re taking — ACT, SAT, GED, etc. — there are some effective time management strategies that will guarantee you the best performance possible without having to add minutes to the clock. Let’s look at a few of them.

Mike Barrett, in his book ACT Prep Black Book: The Most Effective ACT Strategies Ever Published, points out that for the ACT, each question should take “30 seconds or less” when approached correctly. Here’s what that doesn’t mean. It doesn’t mean that you freak out if a question stumps you and you feel 30 seconds becoming a minute. Instead you should look at it as an average. Just using the English part of the ACT test as an example, there are 75 questions and you get 45 minutes to answer each one. By Barrett’s count that would give you 37 and a half minutes to answer each question with about 7.5 minutes of wiggle room in case you want to check your work or you run into trouble. Knowing this structure ahead of time will keep you from obsessing over one question for too long. If you feel yourself spending too much time on a question, move on to the next.

Speed reading is a mental tool that can serve you well on standardized tests. Instead of trying to agonize over every word, try to focus only on the “important” words, flitting over articles (a, an, the) and other one-syllable words. While it isn’t always the case, words with one syllable can usually be skipped without losing track of the meaning behind the question or passage. And on the topic of reading passages, those are an incredibly big deal for standardized tests. Many tests are nothing but one reading passage after another with seven to 10 questions referring back to what you’ve just read. When you see that giant wall of text, there is going to be a temptation to skip it and get straight to the questions, jumping back and trying to find the answer if there is something that stumps you. Big mistake. It may take you five minutes to read that passage, but if it results in being able to answer the questions in 10 to 15 seconds, it’s going to ultimately save time and leave you with a little left over to check your work. Before moving to the next tip, we also want to tell you about speed-reading apps. The Apple and Google Play stores are filled with them, and while you can’t take them with you to use on your test, they can help train your brain to parse main ideas without reading every single word.

3. Go Through Each Section More Than Once

When I take a test, I go into it realizing that I will probably have to go over each section multiple times. That makes me feel more comfortable about taking the test because it’s like I’m giving myself permission to not have to answer each and every question right away. As a result, this frees me up to start by answering the questions I’m sure of rather quickly — as in less than 10 seconds in many cases. Along the way, I might make a small I (for “Intermediate difficulty”) by questions that I’m not totally sure on and a small H (for “Hard Hard Hard”) on questions where I have no idea what’s going on. During the second pass, I’ll take my time and work through the I’s as logically as I can. Some of them may take me longer than 30 seconds to lay to rest, and I may not be 100 percent sure I’m right, but at least I’m making the most well-thought-out guess that I can. And sometimes it isn’t a guess at all. I simply didn’t get what they were asking the first time through — probably from nerves — but when I slow down to really take it in, the answer jumps out at me. After this second pass, it’s time to do the really hard questions, resulting in a third pass. I do take as much time as I can on these, but I also know when I’m licked. If all the answers seem like they’ve been written in a foreign language, I pick one and move on. For the fourth and final pass, I will go through and check my work, time permitting.

Test-takers do not realize how important this tip is for controlling nerves and anxiety. If you are a jittery test-taker, try counting your breaths. As you give more attention to this very basic instinctual function, you’ll realize that you can start to control it. When you control you’re breaths, it’s not long before you have the anxiety in check as well.

Standardized tests are demanding enough without you having to worry the sand will run through the hourglass before you have time to prove how smart you are. Don’t sweat it! By sticking with the four tips that we’ve mentioned above, you’ll be able to tackle each time management obstacle in your path. Good luck!