The 3 Things Donald Trump Would Do To Your Education 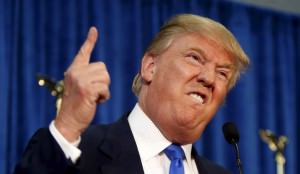 Donald Trump has taken the political world by storm with a series of controversial debate performances and staggering poll numbers that not only put him on a firm pathway to the Republican nomination, but also make his being the next President of the United States a real possibility.

Whether you agree with Trump or not, one thing is for certain — he’s a man of opinions and ideas, and he has motivated a substantial number of voters to back him.

Coming to terms with the idea of a President Trump means looking more closely at what some of his ideas might mean for the future of the country and education in particular. Policy specifics has not been his forte thus far, but he has given some idea of what to expect educationally.

Common Core dictates the standard knowledge and skill sets that every student must have in order to graduate high school. The idea behind CCC is that each student be equipped to advance to college or trade school with the same baseline of ability.

The problem with this line of thought is that some students will find the standard too easy and some will find it too hard. This creates two negative possibilities: boredom and frustration. Both can lead to failure by either not challenging the brightest pupils enough or by yoking students with learning disabilities to an impossible standard.

Still, it does seem logical that there would need to be some type of standard for achievement. That’s where the next phase of Trump’s education “plan” comes in to play.

Secondly, he would abolish the U.S. Department of Education.

Without a uniformed federal standard, there is very little reason to keep the U.S. Department of Education open. Luckily, it would not be necessary in the event that CCC no longer existed. This would reduce the amount of waste that goes into personnel and overhead, and it would set up the next stage of Trump’s efforts.

It is not yet clear how Trump would go about this. He certainly hasn’t been forthcoming with the details, but then, the people voting for him haven’t really cared to ask. One thing he might do is return the standards to state departments of education. This is the most likely scenario for sure, as it plays into the realization that some set of standards should exist, so it allows for a uniform body, but it does so at the point that is closest to the schools themselves. Well, almost.

Almost, because if Trump wanted to get a little more granular with it, he could instead transfer the power to set curricula to individual school districts, making each location autonomous and free to set forth its own standards. If this occurred, it would be a 99 percent certainty that school districts would seek each other out and learn from one another in the approach to what they deemed worthy of learning, similar to the innovations that have occurred in healthcare.

So would it be a bad thing?

Ultimately, it’s too early to tell. In some cases, districts might not fare as well as others, but the regulatory relief that would come from nixing the U.S. Department of Education might give states and school districts more ability to take chances. Whether that proved successful would ultimately depend on the quality of oversight.

But what do you think, readers?

Should school curricula be set at the federal, state, or local levels, and is Trump right to want local, or is it too early to tell? Sound off in the comments section below!