Fake News: A Complete Guide To Stopping The Spread Of Misinformation 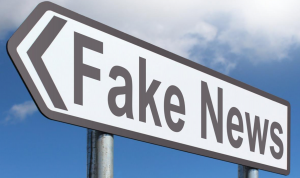 “Fake news” permeates social media and pretty much everywhere you turn these days, and if you’ve ever had an obnoxious relative share conspiracy theories on Facebook, then you know it isn’t going away any time soon.

See, there is hope. And that hope starts with you. If you are reading this now, you’re likely as sick of it as we are. To not get sucked into the vortex, here are some tips for spotting it so you can stop the spread of misinformation in its tracks.

Fake News Spotting Tip No. 1: Learn the difference between news sources and aggregators.

Do not be fooled by the industry speak. Some websites will call themselves news sites when they are, in reality, aggregators. That is, they steal news from legitimate reporting sources, slap in a few thoughts or unrelated data they can link to from other more original websites, and call it a news story.

Inquisitr and Blasting News are two of the big offenders in this space.

On the other hand, legitimate news sources pay their reporters an actual salary, and they have them work leads and sources for information that isn’t necessarily going to be available online. These reporters build relationships with people close to a developing news story, so they can provide new, authentic information to the public.

Sites that do original reporting often include some aggregated content, but they are clear enough on the differences to invest real money in trained professionals.

Washington Post and, yes, Fox News would be two examples of this.

That’s not to say everything a legit news source reports is gospel truth. They often get it wrong, and when that happens, their efforts can cross over into the realm of Fake News. But some would argue — and we would tend to agree — that there is a difference between bad reporting and actual Fake News.

Tip No. 2: Always seek out an opposing view.

Where news sites can easily cross over the integrity line, is in the realm of reporting angles. Ever notice that 99.99 percent of what Breitbart and MSNBC reports is miraculously pro-Trump or pro-liberalism, respectively.

While they may try to do original reporting, they often angle their news stories to make their side look right and the other side look like a bunch of lunatics.

In order to combat the flow of Fake News, you need to always seek out opposing views. Feel free to read Breitbart if you’re a Trump fan or MSNBC if you think that President Obama is the greatest POTUS to ever live. Just make sure that you seek out what the other side is saying.

Doing so will help you stop the spread of misinformation and either change your way of thinking on some issues or fortify what you believe to be true when the truth is not readily apparent.

This tip is an extension of number two.

Whenever you’re on campus and you see someone trying to shout down another person for having a contrary or unpopular opinion, tell them to shut up and let the other person speak.

If you’re the one doing the shouting down, then congratulations, you’re part of the problem.

Becoming a person who encourages debate will allow you to develop into the best possible version of yourself. It will make other people respect what you have to say. And it will ultimately make you a more evolved and happier person.

4. Vet every piece of information that is sure to generate discussion.

Whenever you know there is likely to be discussion or argument, put in your due diligence and see what all sides are saying before spreading whatever piece of content you’re going to spread.

Doing so will keep you from looking like an idiot if it comes back that what you shared as fact turns out to be false or from one of those Fake News websites.

If you have a nagging feeling that what you are about to share is Fake News, by all means listen to your gut. It could turn out to be perfectly legitimate, but better safe than sorry!

Send a DM to someone you trust who has a better handle on spotting Fake News, and just ask, for the record, “Is this legitimate?”

If they like you, they’ll probably tell you yes or no and explain their answer. This, too, will save you tons of embarrassment should it come back false.

6. Look for original sources in the reporting.

Beyond the website itself being either aggregator or legit news, you should look at each story to determine where the information is coming from that is used as the basis for the reporting.

Example: “The Daily Beast reported that a source close to President Trump said…”

The Daily Beast is not the source of the information in that scenario. The source close to President Trump is. If a website — legit or otherwise — is just referring back to weak sources or other websites, then it is not original reporting.

And if they are using an original source, be sure to vet who that source is.

Slate, Salon, The Daily Caller, TownHall — these websites all like to brag that President Obama dropped the mic on conservatives, or President Trump just obliterated Nancy Pelosi with one tweet.

This is not reporting the news, nor is it remotely true.

No one dropped any mics or obliterated any people.

They just said something the site agreed with. So, in the most hyperbolic terms as has grown customary of the Internet, the writer/editor blasted one of those overused and imbecilic “I’ll show them” headlines. These do nothing to add value to the national conversation because the only people reading them and nodding approval are the ones who also agree.

Fake News is born in this sort of garbage, and it needs to stop.

In the age of Trump, there have been a lot of otherwise legit news sources fall prey to the “sources say” reporting that never names a source and almost always ends up being wrong.

Next thing you know, Trump is tweeting #FakeNews from his personal account and holding the first ever Fake News awards.

9. Remember social media is not where you should get your news.

The old saying — cleaned up for the purposes of this website — that “opinions are like armpits, everyone has two, and they all stink” applies here.

Social media is not a haven of truth and justice. It’s where you go to share your life and get into arguments with people.

Rarely is it ever changing anyone’s mind.

Beyond not being able to vet the legitimacy of the links that are shared on social media, you also have to deal with the predatory algorithms of sites like Facebook and Twitter that tend to show you only the things they think you want to see.

Their goal: to keep you on site as long as possible.

That means they program their technology to feed you posts that you will either agree or disagree with (passionately) with no room in between for inconvenient facts, information, and data.

Inevitably if you spend a lot of time on social media or online, you’re going to get suckered from somewhere. The Onion made an entire business model on the hope that it can pull one over on you!

So if you do end up sharing Fake News, here’s what you need to do next:

So there you have it, folks. Have we left anything out? And have you or a loved one ever been suckered in by a piece of Fake News? Share your experiences in the comments section below.