Give It Up! You Are Not Good At Multitasking [Study] 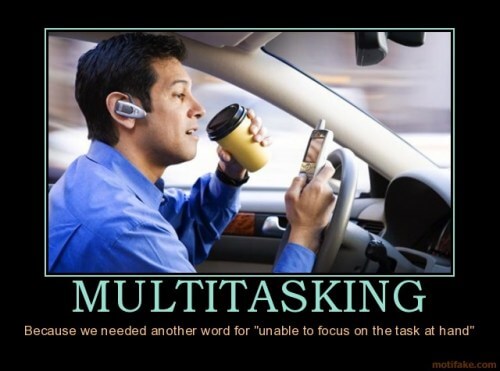 Think you’re good at multitasking? Think again. A revealing new study detailed in this recent NPR post has proven that human beings — yes, even you — stink at the process, and probably will for a long, long time.

The Case Against Multitasking

NPR starts its investigation, not by talking to a slew of office workers equipped with an Alt+Tab function to switch between computer windows, but by hitting the kitchen.

Sharing the story of a diner cook from the Tastee Diner in Bethesda, Maryland, the news site demonstrates just how hard — no, impossible — it is to successfully engage in true multitasking.

Cooks at the Tastee Diner have the unenviable task of taking multiple orders and converting those commands into accurate (and delicious) meals without the advantage of a written ticket. That’s right, the orders come in verbally, and it’s up to the cook to make sense of them.

Shawn Swinson, one of the Tastee Diner professionals admitted to NPR that “My first month here, I was ready to walk out the door,” equating the middle of a rush hour with “an insane asylum.”

“It’s almost unbearable,” he explained. Manager Frank Long added that “very few people can keep up without losing their cool.”

“It’s singularly the most difficult job in this type of operation,” Long said. “Four cooks. Five waitresses. Bus staff. Host. Getting them in and out. … People may have an errand to run. Maybe go to the bank and pick up dry cleaning, and eat. All within an hour, whatever time they have.”

Everyone from the cooks to the customers themselves have learned how to do 10 things at once, or so they think. Researchers, however, have other ideas: “People can’t multitask very well, and when people say they can, they’re deluding themselves,” said neuroscientist Earl Miller, adding that, “The brain is very good at deluding itself.”

Miller would know a thing or two about how the brain works. He’s a Picower professor of neuroscience at MIT, and according to his own findings, “we simply can’t focus on more than one thing at a time.”

What we can do, however, is shift focus from one thing to the next with astonishing speed.

Because, according to Miller, similar tasks compete to use the same part of the brain.

“Think about writing an e-mail and talking on the phone at the same time. Those things are nearly impossible to do at the same time,” he said. “You cannot focus on one while doing the other. That’s because of what’s called interference between the two tasks … They both involve communicating via speech or the written word, and so there’s a lot of conflict between the two of them.”

Miller and other researchers not only identify the struggle, but can actually visualize it through MRI scans.

In a recent study at the University of Michigan, researchers used a MRI scanner to photograph their test subjects’ brains while attempting to complete various tasks.

Daniel Weissman, head neuroscientist on the experiment, said a man lying inside the scanner would be performing different tasks, depending on the color of two numbers visible on a screen in front of him.

This is the brain’s “executive system” at work. “Executive processes allow us to make plans for our future behaviors,” Weissman said. “They allow us to exert some sort of voluntary control over our behavior,” including learning how to ignore distractions.

“For example, if we’re performing a task where we want to watch TV and ignore voices that are coming from, say, our children nearby,” Weissman explained, “our frontal region brain may configure the brain to prioritize visual information and dampen down auditory information,” keeping us in that position until you hear your child scream, which can be jarring enough to override the focal point of your attention.

What Does All This Mean For Your Studies?

Quite simply, it means we need to stop thinking about what we’re doing as multitasking and start thinking about it as switch-tasking. This is important for the following reasons:

Poor ability to multitask can become discouraging: When poring over information in preparation for an exam, it’s very simple to get discouraged by your inability to multitask. After all, you’ve got a fancy computer, a tablet, a phone — among all these technological advancements, you should be able to do several things at once, but you’re not doing a very good job of it. Something must be wrong with you, right? Wrong. Something would actually be “wrong” with you if you could do several things at once because it would mean that you’re inhuman. While your brain may be able to switch quickly, it isn’t capable of keeping up with technology. Think about it. A computer can download a piece of software, play a song and even a web video at the same time. Sure, it’s a bit noisy and confusing, but it works. Until you can, say, sing a Johnny Cash song while you’re also explaining why e equals mc-squared, you’ll never measure up.

Knowing how switch-tasking works actually enables you to plan better: Say, for instance, you have three homework assignments due in science, math, and English. You also have to study for that Social Studies exam and work on your speech for oral communications. You can either break out two sheets of paper, grab a pen in each hand, and start working on diagramming sentences at the same time you’re trying to solve a quadratic function, or you can devise a schedule where you work 20 minutes on English (switch), 20 minutes on math (switch), and 20 minutes on the introduction of your speech, etc. By knowing that you’re working toward a “switch point,” you’ll be able to devote more focus and intensity to an individual project during the 20-minute work period. This will enable you to internalize the concepts necessary for better understanding.

Stop beating yourself up because you happen to stink at multitasking. We all do. And if we think otherwise, we’re just kidding ourselves. Instead of worrying about measuring up to this impossible standard, start focusing on switch-tasking. Improve your transition times, keep tabs on the amount of time you’re devoting to each task, and watch your productivity soar.