What Do Great Students Look Like? [According To Teachers] 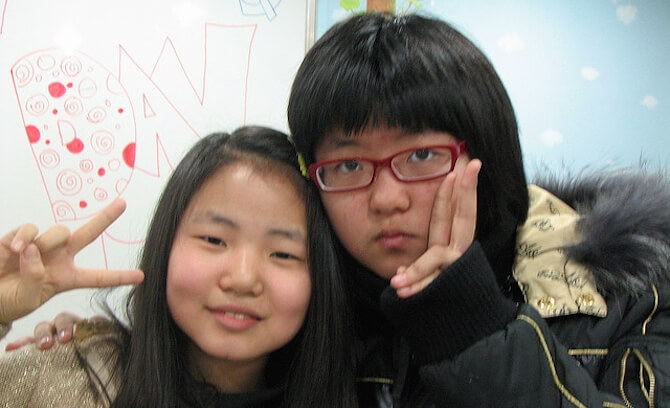 Great students can make even the most mediocre of teachers look like superstars. They can inspire not just the person at the head of the class, but also all of those around them to be the best versions of themselves that are humanly possible. In a recent thread on Reddit, someone asked the question, “Teachers of Reddit, who was your favorite student and why?” The responses range from warm, inspiring, and funny, to downright tear-jerking. Here are just a few of our favorites.

There were these two football players in my fifth hour, during my first year teaching. They didn’t really like English, and they were not too enthused about the poetry unit. So they wrote a poem about a young man coming of age, and called it “The Tale of White Buffalo.” I freaking love it. There was danger, romance, and then White Buffalo killed a freaking bear! Badass. So I hung the poem up at the front of the room, and they got super stoked. We joked around the rest of the year. We just had a lot of fun, stuff like they would ask me if my new pencil sharpener had a hemi, and if I should take it muddin’. Loved those kids.

When They Really Do Care…

When my freshmen found out I was leaving for another school, they hid post its that had their names and “We love you Mrs. –” in all my books, folders, etc. I still miss those kids more than anything.

My first year of teaching, I was grading papers and told this kid he had the handwriting of a serial killer. He looked me in the eyes, said “You’re next” and walked out the door. Instant favorite. He took all of my upper level classes and we still keep in contact.

It was my first year teaching and it was English IV. Fourth period was my worst class – obnoxiousness and laziness rampant, uphill battles and verbal sparring everyday. Many of them did not give an ounce of f**k about making it. Still, there were five kids in there who got me and loved it in there, and they really kept me going.

Mark was not really in any of the cliques in there – not a parties, not in lacrosse, not in rugby, but not disliked by anyone. He was a nice guy who everyone liked enough. He was just always entertained by my shenanigans.

When reviewing for a (basic memorization) Canterbury Tales quiz, I had this elaborate review game that was based on the idea that my old high school peers had been exactly like the pilgrims from Canterbury Tales. Because of this, if I were to read from my old yearbook, the students could review for the quiz by identifying which pilgrim was just like my old classmate. I then produced a big book I had prepped that said “Canterbury High.” It was a ridiculous idea and I had that first year teacher energy to pull it off, but it was enough of a hook to get the game going.

Mark heard my whole introduction and just began the only legitimate slow clap I have ever received. Did the rest of the class join in? Nope. Did Mark care? Nope.

There were lots of other things he did – the giant toaster, photoshopping items into the Sgt. Pepper cover on a project, the effort he put into everything – but that slow clap makes him my favorite student ever.

I had a student in a geology night class I was teaching who would sit in the back of the room and who was very quiet and reserved. She was very friendly, kind, and engaged, just reserved. She was an impeccable student. Every once in a while she would raise her hand and ask a very thoughtful, amazingly coherent question that always got me thinking. Toward the end of the semester, it came out that she had been a cloistered nun for 29 years and that was her first semester back at school! It really explained a lot. We had a good laugh about it. She was so wonderful, I have lost track of her and I really hope she is doing well.

Looking At The World In A Unique Way

First day of school I asked my ninth graders if they knew what plagiarism was. A girl named Sophie raised her hand, and with total dead pan said, “Plagiarism is when you get in trouble for something you didn’t even do.” Sophie, you are my new favorite. Other students, try to be as awesome as Sophie.

Currently working part-time at a pre-school. In the 3/4 classroom, we have a diverse array of abilities and disabilities. One little girl, let’s call her Olivia, has Down Syndrome, but is still incredibly bright. She’s made tremendous progress this year (speaking, stacking blocks on top of each other, putting puzzles together, eating with her fork at lunch, and learning to use the potty are some major improvements we’ve seen since August!), but is still pretty far behind the other kids. Plus, being at lower verbal level discourages the other children from talking to her. They’re not discriminatory, they’re just kids who are a little uncomfortable with a girl who doesn’t talk and is still in diapers. They’ll play with her if a teacher says “Let’s all play together now!” or she walks over while they’re playing, but they won’t ask her to play. She normally plays by herself during freetime.

But then there’s Kevin. Man, I love Kevin. Kevin is the sweetest little kid. He loves to read, eats all his food at lunch, is always polite… anyway, Kevin actively seeks out to play with his friend Olivia. If he knows a story (some kids can’t read yet but have a few books memorized), he’ll sit down and “read” to her. Outside, about half of our tricycles are two-person tricycles, so one person sits and pedals while the other just sits on the back. Like a tandem bike, but the person in the back doesn’t even have to pretend to pedal. Olivia can’t pedal a tricycle yet, but Kevin will help her get on the back of one, then pedal around the blacktop with her on the back. Her face lights up; you can tell she LOVES getting the wind in her hair and being able to be on a bike. And Kevin helps her do that.

I’m a summer camp counselor, and one week I had a little girl in my “unit” that was homesick, incurably so, and it took me hours to console her enough to sleep (the first night ended up being an all-nighter).

But throughout the week I learned that she was homesick because her parents had sent her to camp so she wouldn’t have to worry too much about her sick, dying mother. She couldn’t not think about her sick, dying mother. Her mother was so sick with cancer that she could barely walk, and stayed in a wheelchair or laying down for the entire day, and had to be helped through everything.

Halfway through my week with her, her family sent her a LARGE package filled with dog stuff. Magazines, stuffed animals, stickers, all that sort of stuff. She went hog wild! That night she showed me all that she had gotten (because yes, she was homesick) and told me about her aspiration to become a veterinarian and help dogs no matter what, even if the owners couldn’t pay.

She eventually headed off to bed, all on her own, but left the package with me in case I wanted another look. I was packing all the stuff back in neatly when I saw a note at the bottom. It was from her mother and as far as I could tell, it hadn’t been touched or seen.
It explained her mother’s never-ending love for her little girl, and how PROUD she was to have a daughter just like her. She reminded her daughter to keep fighting and to keep going and to never give up.

There was a post script, it said, “If you like this package, wait for the surprise I have for you on Friday!” (last day of camp)

I showed her daughter the note the next morning, Thursday morning, and we speculated for the entire day on what the surprise could be. Thursday night she cried because she was excited to be home but she was also going to miss camp, and it was difficult for me to not tear up.

It turns out we were nowhere close to the surprise, because on Friday afternoon, I saw a man and a woman coming down toward the kids. The woman was in a wheelchair, holding a medium-sized box, and was smiling from ear to ear. As my camper ran toward them, laughing and sobbing, her mother stood up, handed the box to the man, and held out her arms for her daughter to run into.

The scene was obviously emotional, I did end up crying a bit, and then her mother handed my camper the box. Inside was a puppy, an honest-to-goodness puppy, and was the whole reason she was sent to camp that week, so she could be surprised (as mom told me later).

This girl is my all-time favorite camper because of her love for her family and her mother and her love for helping people. Such a gentle soul with such a difficult burden placed upon her.

Her mother passed away this December from breast cancer. May she rest in peace.

Teachers don’t always get a classroom filled with inspiring students. Many times the job is discouraging, frustrating, and even infuriating. But every now and then, one student will come along that makes all the unpleasantness completely worthwhile. In the examples above, those types of students show they know there is a time and a place to be funny and serious. They value their education and their fellow students, and they have at least some awareness that the world is bigger than themselves. They also realize that they have the power to improve it through kindness, creativity, and passion.