NFL To Stress Academics: 7 Reasons Why They Should Have Done This Yesterday 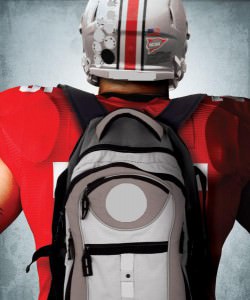 According to CBSSports.com, the NFL is considering “not inviting players who are academically ineligible in college to the scouting combine.” The decision is believed to be influenced by the recent Aaron Hernandez murder case. CBS writer Bruce Feldman said the move is being discussed “because of the increased scrutiny on the maturity and commitment of the prospects entering the NFL.” Feldman’s source, who was said to be with the league, said that if the measure had been in place in 2013, “a sizable group of players would not have been invited to Indianapolis for the combine.” While it’s a move that is already being met with criticism, I think it’s long overdue for the following reasons:

Football Is A Mental Game.

People who have never played football may think that it’s a game for brutes and blockheads, but in reality, you have to be very smart to play the game well. While I’d hardly call this statistic precise, an old high school football coach used to stress to all of us, every practice, that the game is 90 percent mental. While that may not be an official study, it does have a lot of reality in it. Football involves the ability to understand your role and the roles of all your team members in order to succeed. When I was in high school, I graduated with a 3.87 GPA, yet I still had trouble with some of the plays on offense. And in addition to the intelligence factor, you also have to be instinctive, realizing opportunities as they present themselves. Just ask any running back, who ever cut back from the direction the play was going because he found 50 yards of open running lane. In other words:

If A Student Can Learn Football, He Can Learn Other Things.

ESPECIALLY, if you’re smart enough to play the game at the pro level, you’re smart enough to succeed in the classroom. We’re not saying that you should feel dumb if you have trouble with a subject or if you’re not a good test-taker. Those things can happen to anyone. But how you respond to them is vital, and it really is true that when you don’t use it, you lose it. Maybe not forever, but your brain can atrophy just like your body, and the only way to overcome it is to get it active again. That means not being focused on one thing, but several.

If A Student Is Held Accountable For Learning Other Things, Then He Will Take His Education Seriously Much Earlier In Life.

It all hinges on what expectations are placed on the student. And expectations should come from three primary sources: the parent, the teacher, and the student. We talk a lot on this blog about how parents need to do a better job of holding their children and themselves accountable for an education. Teachers already know to have standards. It’s the entire nature of their job, and should they ever forget it, the state and federal departments of education as well as Congress have continuous reminders for them. That brings us to students. When a student wants to achieve something, it’s difficult to keep him from doing it. And students do have goals they would like to reach. The only problem is that those goals are often compartmentalized, and the student begins to think there are certain areas of his education that are expendable. Football is one of many reasons some students think this way, because they see peers, who struggle in the classroom excel on the field, and then get multi-million dollar contracts. But that only happens for a very small number of individuals, who ever play the game. For the NFL to send a message like this, it can change this perception that kids have toward education.

Difficult concepts like foreign languages are best learned while a student is in early development. By sending a message to youth that even at the pro level, you have to be smart, will get impressionable young people involved in their education much earlier, resulting in a better grasp of core subject areas.

If A Student Has A Strong Foundation For Learning Early In Life, He’ll Be Able To Accomplish Great Things On And Off The Field Later In Life.

This is a very important reason for the NFL to emphasize education first, because it reminds every student athlete that careers in sports can be fleeting, and it’s important to have something they can fall back on later in life. Even among those who have a professional football career, one can never tell when they will be cut from the team or when an injury will end their time on the gridiron early.

If A Student Grows Up Valuing Football And Education As Equals, Then He’ll Have A Bright Future Even After His Time In The Game Is Over.

More than simply “having something to fall back on,” it’s important the NFL take this initiative because it can also teach students to discover a passion they can pursue long after the game is over. A person’s best years should not be over and done after 35 or 40. If football defines what those “best years” are, then that’s probably all you can expect as a pro, and for the 99.9 percent, who don’t make it to the NFL, it’s finished even sooner at about the age of 22. By emphasizing education as an equal to sports, the NFL can influence many students to find means of employment that are more than just a job.

Since Most Student Athletes Will Never Play In The NFL, Understanding That Education Is Emphasized Even In Pro Football Will Help Them To Make The Most Of Their College And High School Years.

By this, we mean that it could lead students to pursue other interests more thoroughly. When the thinking is that “academics will be important even if I do make it to the NFL,” students will be more likely to seek a more well-rounded high school and college career.

With education, we are the best versions of ourselves. By placing a heavier emphasis on its importance, the NFL can cultivate smarter teams, smarter students, and better role models. Do you think that professional football players should be held to a higher academic standard than they are?