OccupyTheBookstore Vs. Follett: The AMA Every College Student Should Read 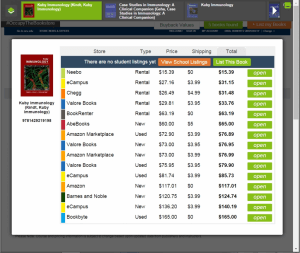 OccupyTheBookstore is a movement that you may not have heard about for your Google Chrome browser. It’s essentially a plugin that will overlay the cheapest online availability for your textbooks directly on your college bookstore website. The plugin has managed to save college students thousands and thousands of dollars on overpriced textbooks, but it hasn’t been without a fight. In fact, the creators had been asked to remove the extension by Follett, a $2.7 billion company that services over 1700+ college bookstores but instead of complying, they rebuilt the extension from the ground up and re-branded it as #OccupyTheBookstore, allowing the user to literally “occupy” their website to find cheaper deals.

Recently, the gang behind this movement took part in a reddit AMA. Here were some of the most intriguing interactions.

Q. From a legal standpoint, what is the argument from Follett? It seems to me that a user has a right to display whatever information on their browser they want to. Assuming you are in no way manipulating the packet that is received from the textbook service, and are only manipulating the end result, is there any legal precedent you know of that says that you either can or cannot do this?

A. Follett had a few angles, none of which have much merit: They could try the Copyright angle, arguing that our plugin constitutes copyright infringement by creating an unauthorized adaptation of their page. That said, we’re opt-in, so while we are modifying the web page, we’re only doing so with the end-users permission. Additionally, we’re not manipulating information or blocking the ability to use any/all aspects of the site if the end user so desires. They could also try the Terms of Service angle, saying that we’re knowingly equipping their users to breach the TOS by using scrapers, data-extractors, etc. That said, we never directly interact with any bookstore website, we merely supplement information provided by the end-users local browser. As such, we think that they could theoretically go after the individual student, but they probably would never bother. In searching for precedent, we looked at AdBlock heavily, and also at price-comparison plugins like Honey.

Q. So if you guys are from texts.com, does that mean you would have the backing to fight this if it does go to court?

A. Not really. We’re still just a bootstrapped company working out of a cramped office that smells like Sriracha. We do have a lawyer, but I think that going to court against a behemoth like Follett would be prohibitively expensive for just about any company of our size.

Q. Could you give us an idea of which schools / regions this plugin will service? Is it U.S. only, only specific schools, etc?

A. If your bookstore website ends in Neebo.com, BKSTR.com, or BNCollege.com, it should work. We can try and support other sites, just let Ben ([email protected]) know. … That means we’re potentially facing flak from:

Q. Honestly, how is your plugin any different than me clicking “Inspect Element” and modifying the page manually?

A. In all reality, it isn’t much different. There are many sites that do price-comparison (BigWords, SlugBooks, CampusBooks, and our main site: Texts.com) when you provide an ISBN. We just make it easier by bringing this functionality directly to the bookstore website.

Q. Curiously, if they are just manipulating the end result, how would this be different than something like ad block? (In the sense that it is legal) … I ask this acknowledging I know next to nothing about these things.

A. This is the crux of why we’re allowed to do this. We don’t interact with the bookstore website server, just the end-user’s browser. Because we’re opt-in, many of Follett’s potential claims are wiped out.

Q. This is great! I am going to share this with my younger friends who could benefit greatly. What types of threats did you receive? Were any personal in nature and not very professional?

A. The e-mails that Follett weren’t unprofessional or personally threatening, but they were clearly intended to intimidate us into quickly complying and removing the plugin without doing our research. … They effectively asked us to remove the plugin, stating that they’d “need to involve their legal team” if we didn’t comply. A few days later, they told us that “we will have to take legal action” [if we don’t remove it by the deadline]. We never responded to their e-mails, largely because we needed more time to do our research and confirm that we are allowed to do this.

Q. Why are the online access codes (which I always need for classes) so expensive?

A. This is a tactic used by publishers to try and recoup money being lost to the used textbook market. This ensures that even when students can benefit from selling to their classmates, that they can still get paid.

Q. Why is this market able to provide such inflated prices when the people purchasing them are among those who have the least?

A. There are a few factors at play.

Students need the textbooks, so they’re (generally) willing to overpay vs. not acquiring the book at all — especially underclassmen

Publishers are in an oligopoly, where there are few incentives to lower prices or seek innovative models that could threaten the main business line

Publishers (and campus bookstores) are being hurt by the used book market, which is dominated by firms like Amazon and Chegg. As a result, they raise prices to try and maintain profits which leads to a positive feedback of spiraling prices.

/u/chair_boy makes a good point that the various parties understand that students will oftentimes rely on loans to cover costs: drop in a bucket

Planet Money did a great episode which goes into more details on some of this.

Overpriced textbooks have long been a bane to the cash-strapped college student. If you are wondering how you might be able to make a difference, the OccupyTheBookstore guys sign off with these final words of advice.

“The true silver-bullet and pie-in-the-sky is broadly-accepted and distributed open source textbooks. There are some exciting initiatives at a few schools pilot-testing this approach. My long-term advice would be to rally behind these efforts and support them through talks with your SGA, professors, and administrations.

Immediate steps you can take:

2) Ask the professor if old and/or interiational editions are suitable — this can easily save you hundreds.

3) Buy and sell with other students; either on campus FB groups, or through a textbook exchange (such as our main site, Texts.com)

Good luck in the fight to save some money, college students!