Richard Feynman Quotes, And His Key To Becoming An Expert At Anything 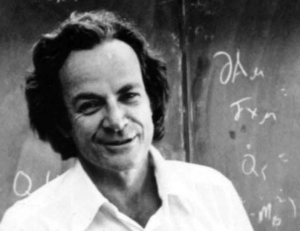 Richard Feynman is a name you need to recognize if you want to build a career of being on-demand rather than one of being automated into obscurity.

As Cal Newport observed in a 2015 blog post, Feynman, a famous physicist, was more than willing to admit when he didn’t know something, and that may have been one of his greatest strengths because of what he would do next.

Using a little bit of Newport and a little of Feynman’s biographer James Gleick, observe the following excerpt that lays out what Newport calls…

Newport: After his second year of graduate school at Princeton, Richard Feynman faced his oral examinations. Feynman was not yet the famous physicist he would soon become (as his biographer James Gleick put it, “His Feynman aura…was still strictly local”), so he took his preparation seriously.

Feynman drove up to MIT, a campus familiar from his undergraduate years, and a place “where he could be alone.” It’s what he did next that I find interesting.

“[He] opened a fresh notebook. On the title page he wrote: NOTEBOOK OF THINGS I DON’T KNOW ABOUT. For the first but not last time he reorganized his knowledge. He worked for weeks at disassembling each branch of physics, oiling the parts, and putting them back together, looking all the while for the raw edges and inconsistencies. He tried to find the essential kernels of each subject.”

Newport says that of the “future stars” in the world of science, he observed a similarity with Feynman. They all seemed to share “his hunger to understand what he didn’t know.”

Newport continued: “If someone published something good, they wanted to understand it. If this good thing used some mathematical technique they didn’t know, they’d drop off the radar until they learned it. If you published an interesting result, they’d soon learn every detail and be able to replicate it easier than you could manage. … Their proverbial notebooks of things they don’t know where always growing, and as a result, they thrived.”

Newport reasons that dedicating of a notebook “to a new learning task … can provide concrete cues that help you stick with this hard process” of learning the things you don’t know. “At first, the notebook pages are empty, but as they fill with careful notes, your knowledge also grows. The drive to fill more pages keeps your motivation stoked.”

Do check out Cal’s full blog post linked above when you get a chance because it unlocks in more detail the genius of Richard Feynman and provides a case study in how the Feynman Notebook Method can work in concrete terms. With that said, here are…

The 17 Most Useful Richard Feynman Quotes

1. The first principle is that you must not fool yourself and you are the easiest person to fool.

3. We are at the very beginning of time for the human race. It is not unreasonable that we grapple with problems. But there are tens of thousands of years in the future. Our responsibility is to do what we can, learn what we can, improve the solutions, and pass them on.

5. If you realize all the time what’s kind of wonderful – that is, if we expand our experience into wilder and wilder regions of experience – every once in a while, we have these integrations when everything’s pulled together into a unification, in which it turns out to be simpler than it looked before.

8. If I get stuck, I look at a book that tells me how someone else did it. I turn the pages, and then I say, ‘Oh, I forgot that bit,’ then close the book and carry on. Finally, after you’ve figured out how to do it, you read how they did it and find out how dumb your solution is and how much more clever and efficient theirs is!

9. If you keep proving stuff that others have done, getting confidence, increasing the complexities of your solutions – for the fun of it – then one day you’ll turn around and discover that nobody actually did that one!

10. If I could explain it to the average person, it wouldn’t have been worth the Nobel Prize.

11. When I was about thirteen, the library was going to get ‘Calculus for the Practical Man.’ By this time I knew, from reading the encyclopedia, that calculus was an important and interesting subject, and I ought to learn it.

12. Until I began to learn to draw, I was never much interested in looking at art.

13. It is necessary to look at the results of observation objectively, because you, the experimenter, might like one result better than another.

14. There is a computer disease that anybody who works with computers knows about. It’s a very serious disease and it interferes completely with the work. The trouble with computers is that you ‘play’ with them!

15. You’re unlikely to discover something new without a lot of practice on old stuff, but further, you should get a heck of a lot of fun out of working out funny relations and interesting things.

17. It is in the admission of ignorance and the admission of uncertainty that there is a hope for the continuous motion of human beings in some direction that doesn’t get confined, permanently blocked, as it has so many times before in various periods in the history of man.

History will debate some of Feynman’s contributions — namely his assistance in the development of the atomic bomb in World War II — but no one can deny his enormous intellect and contributions to the world of physics.

But you don’t have to have physicist aspirations to learn from him, as each of these quotes and his method of productivity show. What are some Feynman principles that jumped out to you? Share in the comments section below.