Interview IQ: What Is It, And How Do You Improve It? 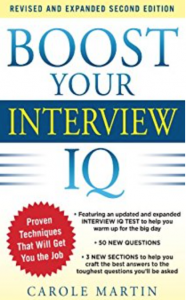 Interview IQ is something I am shamefully aware that I do not talk about enough as your resident blogger. But that’s going to change a little today thanks to the book Boost Your Interview IQ by author Carole Martin.

The book is a treasure trove of information with dozens of questions and detailed responses — the good, the bad, and the ugly — along with explanations of why an answer does or does not work.

Today we will give you a sample by focusing in on one of the most common questions you are likely to hear in a job interview, especially one fresh out of school and early in your career.

Interview IQ excerpt from Carole’s book: “Give me an example of a time when you had to work on a team. What role did you play?”

Martin breaks down her book with several multiple choice questions. This particular one tries to get a sense of whether you are a team player as well as what your experience and comfort levels are in being one.

Martin provides three responses that will be scored 0, 3, and 5 with 5 being the best. In the book, she provides the question and choices on one page and her reasoning on the other.

Let’s look at how she handles the multiple choice attempts at answering this question, followed by the scores and the reasoning for why she ranked them the way that she did.

“I’ve had good and bad experiences working with teams. One recent team project was in my marketing class. I was chosen to be the lead on a large project with 10 members of the class reporting to me. It was sort of an overwhelming number of people to deal with, but I guess that was part of the exercise. I hadn’t really had much experience in managing people, but I learned fast — real fast. Some of the team members were motivated, and some were not. I found myself in several intense discussions trying to get those who were not motivated to be motivated. One thing I learned for sure is that I do not want to manage people in my career.”

“One of my favorite activities as an MBA student is the group projects. In one of the projects I participated in, we had to put a marketing plan together. We decided we would all be equals, and so there was no leader. I did take it upon myself, however, to get contact information for each member. Since I was the strongest member in technology, it was a given that I would do the website and graphics. I had separate meetings with each team member to make sure I had everybody’s input on the overall plan. I’ve never worked with a group that was so cohesive. Everything just fell into place. One of the members attributed a lot of the success of our project to my design work and the website I put together. I appreciated the acknowledgement — not to mention the A grade we received for the project.”

“As a member of the intramural football team, I am in a team situation a great deal of the time. I am a person who likes to motivate people, and I am good at doing just that. I made it a point to talk to every member of my team and to find out a little about each person, trying to connect with each one in some way. I also made it a point to do a lot of ‘high fives’ when someone played well. I was also very supportive when someone missed the ball, because I know how that feels. I was voted the player with the most team spirit in our end-of-season award dinner. That gesture made me feel like I had contributed to the spirit of the team, and that’s even better than making a touchdown — almost.”

Answer A. Martin dubbed this the weakest response because of a weak tone. “It is negative from the beginning and goes downhill all the way. In this answer, you have ruled yourself out of any kind of position that requires leadership by stating that you don’t want any part of it. That’s OK if you have made a decision not to be a manager. However, short-term thinking can change, and it is best not to rule out all opportunities based on one bad experience.”

Answer B. Martin found this to be the strongest answer because “it recounts a specific time when you made a difference in a team project — communicating and relating with others. Even though you were not the leader of this project, it was clear that you took the initiative to take a leadership role in organizing and planning. While you are answering one question, many other factors are being revealed from your story: initiative, strong technical knowledge, ability to explain technology, communication, and ability to work collaboratively by taking others’ ideas into consideration. That’s significant information to come out of one story.”

Answer C. Martin calls this answer a mediocre one in the sense that it won’t rule you out, but it does still leave some things unstated. “This is an OK answer,” she writes. “Your answer describes the situation: it tells what your role was — a team member; it relates how you motivated the team by interacting with the individual players; and it notes how you were rewarded by your behavior, both by receiving an honor and by feeling good about it. It would be a stronger answer if it were one specific game or incident when you affected an individual’s behavior.”

If you are concerned about your interview IQ, especially if you have an interview coming up that you just don’t want to botch, drop by Amazon or your local bookseller and pick up a copy of Martin’s book. It’s an invaluable tool in being able to appropriately address some of job interviewers’ toughest questions.