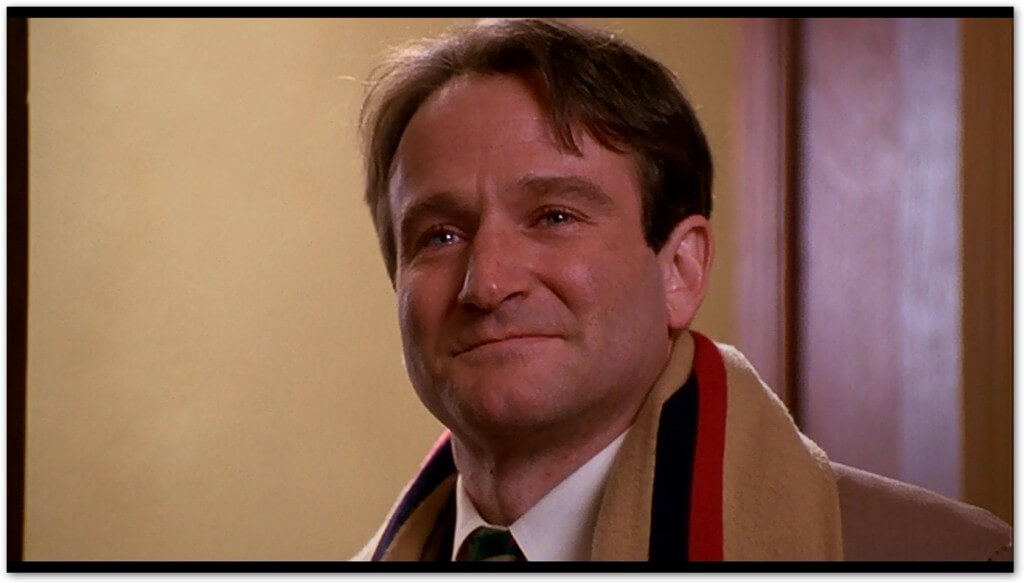 With the untimely death of Robin Williams on Monday, we thought it would be appropriate to look back at some of his best films and, specifically, the quotes that made his characters so inspirational to so many. From his role as teacher John Keating in the classic Dead Poets Society to psychologist Sean Maguire in Good Will Hunting, Williams did so much through his craft to enlighten us, entertain us, and make us laugh. Here are some of our favorites.

No matter what anybody tells you, words and ideas can change the world.

They’re not that different from you, are they? Same haircuts. Full of hormones, just like you. Invincible, just like you feel. The world is their oyster. They believe they’re destined for great things, just like many of you, their eyes are full of hope, just like you. Did they wait until it was too late to make from their lives even one iota of what they were capable? Because, you see gentlemen, these boys are now fertilizing daffodils. But if you listen real close, you can hear them whisper their legacy to you. Go on, lean in. Listen, you hear it? – – Carpe – – hear it? – – Carpe, carpe diem, seize the day boys, make your lives extraordinary.

Boys, you must strive to find your own voice. Because the longer you wait to begin, the less likely you are to find it at all. Thoreau said, “Most men lead lives of quiet desperation.” Don’t be resigned to that. Break out!

O Captain, my Captain. Who knows where that comes from? Anybody? Not a clue? It’s from a poem by Walt Whitman about Mr. Abraham Lincoln. Now in this class you can either call me Mr. Keating, or if you’re slightly more daring, O Captain my Captain.

Now we all have a great need for acceptance, but you must trust that your beliefs are unique, your own, even though others may think them odd or unpopular, even though the herd may go, [imitating a goat] that’s baaaaad. Robert Frost said, ‘Two roads diverged in the wood and I, I took the one less traveled by, and that has made all the difference.’

Sucking the marrow out of life doesn’t mean choking on the bone.

We’re not laughing at you – we’re laughing near you.

I always thought the idea of education was to learn to think for yourself.

I was the intellectual equivalent of a 98-pound weakling! I would go to the beach and people would kick copies of Byron in my face!

People call those imperfections, but no, that’s the good stuff.

You’re a tough kid. I ask you about war, you’d probably throw Shakespeare at me, right? ‘Once more into the breach, dear friends.’ But you’ve never been near one. You’ve never held your best friend’s head in your lap … and watched him gasp his last breath lookin’ to you for help. If I asked you about love, you’d probably quote me a sonnet, but you’ve never looked at a woman and been totally vulnerable. Known someone that could level you with her eyes. Feelin’ like God put an angel on Earth just for you, who could rescue you from the depths of hell. And you wouldn’t know what it’s like to be her angel, to have that love for her be there forever. Through anything. Through cancer. And you wouldn’t know about sleepin’ sittin’ up in a hospital room … for two months, holding her hand, because the doctors could see in your eyes … that the terms ‘visiting hours’ don’t apply to you. You don’t know about real loss, ’cause that only occurs when you love something more than you love yourself. I doubt you’ve ever dared to love anybody that much.

All of life is a coming home. Salesmen, secretaries, coal miners, beekeepers, sword swallowers, all of us. All the restless hearts of the world, all trying to find a way home. It’s hard to describe what I felt like then. Picture yourself walking for days in the driving snow; you don’t even know you’re walking in circles. The heaviness of your legs in the drifts, your shouts disappearing into the wind. How small you can feel, and how far away home can be. Home. The dictionary defines it as both a place of origin and a goal or destination. And the storm? The storm was all in my mind. Or as the poet Dante put it: In the middle of the journey of my life, I found myself in a dark wood, for I had lost the right path. Eventually I would find the right path, but in the most unlikely place.

What’s wrong with death sir? What are we so mortally afraid of? Why can’t we treat death with a certain amount of humanity and dignity, and decency, and God forbid, maybe even humor. Death is not the enemy gentlemen. If we’re going to fight a disease, let’s fight one of the most terrible diseases of all, indifference.

I wanted to become a doctor so I could serve others. And because of that, I’ve lost everything. But I’ve also gained everything.

What are some of your favorite Robin Williams quotes? Share yours in our comments section!