The SAT Exam remains a major tool that colleges use to determine your acceptance. It can also play a role in how much non-loan financial aid you receive. Essay writing is an integral part of this important exam, and without the ability to organize your thoughts, analyze an argument, and think on your feet, you will struggle to get a good score. To stop that from happening, we’ve grabbed an essay prompt like what you will see on the SAT. Here’s a quick look:

People often focus on “the details,” those seemingly minor features and elements that often have major effects or consequences. Whether they are making ordinary, everyday decisions, analyzing historical events, or enjoying the plot of a novel, many people consider the details to be all-important. Others, however, argue that paying attention to details distracts people from the big picture—perceiving an idea, goal, or plan in its entirety.

Assignment: Is it a disadvantage to pay attention to details? Plan and write an essay in which you develop your point of view on this issue. Support your position with reasoning and examples taken from your reading, studies, experience, or observations. 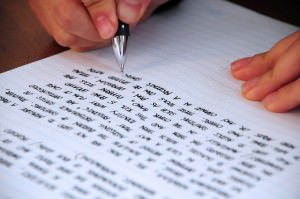 A question like this attempts to paint you into the black and white corner when the truth is somewhere in between. You know that perfectionist qualities can derail any deadlined project. You also know that focusing too heavily on the big picture can mean a poor result because of one or two key missteps. After all, the devil IS in the details.

Maybe you agree with one point over another. That’s okay. But there is gray area to consider, and it is in this gray matter that great essays are written.

By acknowledging the strengths and weaknesses of the viewpoint you believe (and oppose), you are more capable of building solid arguments, and in solid arguments, solid essays are formed. Let’s expand the above example by stating that the details are more important than the big picture.

Start by attacking the pros and cons of your argument. Yes, you only have a limited time to write your essay, but this will serve you better than spending ten minutes on that “perfect” topic sentence.

Spend about five minutes brainstorming a list. Use your scratch paper and make two columns labeled “pro” and “con.”

Pros of “the details”

Cons of “the details”

Knowing the points you want to make is important, but as you can see it doesn’t quite make up a whole essay. To do that, I need to take the abstract and make it more concrete. There are numerous places where I can turn to mine examples for what I’m wanting to get across: that details are more important than big pictures. Here are just a few of the potential outlets for your illustrations.

That’s hardly an exhaustive well to draw from, but you get the picture. I’m going to use a recent trip to Houston where I found myself at the mercy of the GPS on my phone.

Not having traveled to Houston before, I knew it was one of the largest cities in the US, but I had little clue of just how insane the traffic would be. For a guy from a town of 86,000, talk about rude awakening!

But I don’t think it was just me either. I’ve driven in Dallas and Miami, and the roads were surprisingly sane and self-explanatory. Houston was another beast, and without the Map App, I would probably still be sputtering around West Texas in circles. BUT, to say it was all easy to follow with the interchanges, roads with as many as four names, 100,000 cars surrounding you at all times, and constant stop-go-stop-go traffic, would be a lie.

Looking at the blue line symbolizing the route I was to follow to get to my hotel, I realized that it would do me little good without a zoom so I could see more of the surrounding streets. The dot that symbolized my car wouldn’t look off-track in the Overview format until several missed exits. Only by getting down into the nitty gritty could I make the right turns and diagnose where I went wrong.

This story may not be Indiana Jones territory, but it does illustrate my point. The Overview is very useful when I’m trying to get an initial feel for where I’m going. It also confirms my familiarities with certain areas lending peace of mind to the overall journey. But it all falls apart when you are met with new challenges that require a closer look. In the end, it’s “the details” that are the most important. Without them you’ll never be able to tackle the complex, and you won’t even know enough to know when something is wrong.

Your task is to acknowledge the strengths and the weaknesses of both sides while taking a definitive stand and using your illustration to solidify the points that support your case.

Think in illustrations. Let those be your details. Master them and the big picture of your essay will fall into place.