Skills vs. Passion: What Matters More? 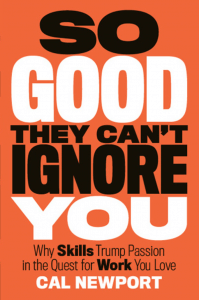 It’s no secret around here that we’re big fans of Cal Newport and his thoughts on study hacking. One particular area where yours truly has always felt a kinship with Newport is in calling out this horrible advice that people often give you throughout school: follow your passion.

According to Newport, that’s a prescription for failure. In his book, So Good They Can’t Ignore You: Why Skills Trump Passion in the Quest for Work You Love, Newport attests that passion comes “after you put in the hard work to become excellent at something valuable, not before.”

“In other words,” he adds, “what you do for a living is much less important than how you do it.”

So if passion isn’t what I should be following, why do people keep telling me it is?

Good question. It probably has something to do with the fact that people confuse passion with dreams. Dreams are nice, fanciful exercises that nurture the mind, but they don’t get things done. You don’t have to work hard to have a dream, and you don’t ever get to automatically transfer said dreams into reality.

Passion requires action to develop and mature. If you’re not striving daily to be good at something, then you don’t really have passion for it. It goes back to the old adage that many people want to be authors, but very few wish to be writers. Authors “have written” a book, and they often rest on those laurels. Writers, on the other hand, show up every day and put in the work. They get better at their craft, write a lot of garbage, and edit their way to coherency. They are actually passionate about writing, while their “author” buddies dream big but never seem to finish anything.

If you are worried that you may be dreaming instead of living your passion, there are some things that you can do to turn the tide.

1. Wipe the lipstick off the pig.

Even though models wear lipstick, you’re not going to turn a pig into one just by smearing it all over his snout. Often times, our dreams are pigs wearing lipstick in the sense that they want to be pretty, but they require some hard work to get there.

You have to stop assuming that dressing up a dream and calling it a passion will work. Instead you need to break your dream down into the sum of its parts. What are the specific actions and skills you will need to learn in order to have a chance of making that dream come true?

2. Track your progress over a period of time.

Once you have an idea of where you’re going and a plan or understanding of how to get there, start being mindful of your days and, more specifically, the progress that you log on each one. If you can track a plan for one or two or six months and see no signs of improvement, then you obviously don’t have the skills to develop what you’re doing into a passion.

3. Don’t focus too intently on the big picture — at least not at first.

What is so wrong with the “big picture”? It can often put too many stars in your eyes, getting in the way of the necessary actions you have to take and skills you have to learn to get there. While it’s good to know where you’re going before setting out on the journey, you’ll never get there if you don’t zero in your focus to the next steps in front of you.

4. Know how to take a compliment.

What does taking a compliment have to do with becoming more skilled and, thusly, more passionate? In short, being good at something requires self-confidence. If you have trouble admitting that you’re good at something, then you’ll never let yourself reach that full potential. It’s important to know you’re good when you’re good because it will also make you attune to the areas that need improvement. In other words, buy into your results, not hype.

It’s one thing to learn how to do something, but it’s another to master it. Mastery requires being able to internalize a skill set to the point that it becomes second nature. Whenever you’re first learning a new skill, you’re going to feel a little like that toddler taking his first steps. He’s going to sway and stagger, but as soon as he finds his balance, it becomes easier to take the next step and the next and the next. Before you know it, he’s running everywhere! Toddlers get to that point of mastery because they internalize every piece and build on it to produce more complex actions. Internalization is everything; learn to use it.

It can be seductive “pursuing your passions,” but before you go too far down the wrong road, take a look at the advice above and the words of Cal Newport. You cannot have passion without the urge and the ability to be good at something. Seek out those skills and let them mature your passions.