Student Success Act: Where Things Stand After No Child Left Behind

The Student Success Act is the latest move by Congress to try and improve the American education system after 12 years of struggles, thanks in part to No Child Left Behind and to the Obama Administration’s efforts to trade off NCLB for a monopoly on educational policy.

While NCLB, President George W. Bush’s key educational reform, handcuffed schools to an inadequate system of accountability measures, the current White House has played a form of policy blackmail with schools, allowing them an “out” with some of NCLB’s provisions, provided the schools adopt specific policies that are preferred by the Administration. 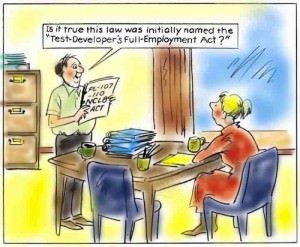 Whether these specific policies are good or bad is anyone’s guess, and truly not the point. Federal educational laws are meant to be made by — oh, I don’t know — the LEGISLATIVE branch of government. But I digress.

Unfortunately, the President’s policy and Congress’s seem to be about creating as polar opposite plans as possible, intentionally shutting each other out for the purpose of name-calling and party posturing.

Students deserve much better than that from their government. So is the Student Success Act it? Well, let’s see:

The Student Success Act abolishes the accountability measures that NCLB short-sightedly put in place. As the bill’s author, Rep. John Kline (R-Minnesota), put it, “Hindsight is now 20-20 and we can now identify the law’s weaknesses.”

In comments to Huffington Post last week, Kline called NCLB a “one-size-fits-all mandate that fails to provide schools any meaningful information about their students’ performance.”

Responding to criticisms that schools might break down without federal supervision, Kline said, “We maintain the disaggregated data so all parents involved in the system can look and see where there’s a problem and take action.”
Funding

This is a big roadblock for Democrats, and part of why the measure passed the House of Representatives without any blue state rep support of any kind. Future federal funding of schools would be kept at sequestration levels, which, as you may remember, is scaled way back from where it used to be.

Democrats have looked at the funding cuts to education as a temporary evil that will go away at some point in the near future. The idea that levels would be kept as they are moving forward makes the bill seem like a wholesale “gutting” of national educational support.

Proponents of the bill — mostly Republicans — argue that Democrats are too quick to throw money at a problem without thinking it through. The thought is that high funding levels are not needed in a world where teachers are freed from the stifling pressures of “teaching to the test” and technology has managed to make things so much more scalable.

In essence, throwing money at a problem solves nothing if you don’t have a plan to work more efficiently. That could be a hard sell to schools anticipating a boost in federal funding at some point in the not-too-distant future. Regardless of whether the schools need the money, it can be rather difficult to let go of money that was once securely in the bank, and being forced to do so will likely result in a backlash.

A rival piece of legislation from Senator Tom Harkin (D-Iowa) keeps some of NCLB’s accountability measures and has cleared the Health, Education, Labor and Pensions Committee. The bill would almost certainly not pass the House and could have a difficult time in the Senate, especially if a vote doesn’t occur before the 2014 mid-term elections, which Nate Silver has forecast as an advantage for Republicans reclaiming control of the Senate.

Still, for Harkin, “Reauthorizing the Elementary and Secondary Education Act is one of my highest priorities. Teachers, families and children of this nation need the certainty of a reauthorization that will ensure access to comprehensive education, teachers who are the most effective, and standards that are world-class … Unfortunately, the House bill, H.R. 5, falls short on all these counts.”

Naturally, Harkin has an ally in the White House. Secretary of Education Arne Duncan issued a statement on Friday that emphasized the President’s veto threat. “It marks a retreat from high standards for all students and would virtually eliminate accountability for the learning of historically underserved students — a huge step backward for efforts to improve academic achievement.”

Duncan continued: “It would lock in major cuts to education funding at a time when continued investments in education are the only way we can remain competitive on the world stage.”

Even conservative-tilting Business Roundtable got in on the Student Success Act negativity: “While many parts of H.R. 5 align with the kinds of reforms Business Roundtable believes are necessary to strengthen education in the United States, the bill does not go far enough to ensure accountability,” said president John Engler. “Without adequate measures to ensure student performance, postsecondary educators and employers cannot trust that a high school diploma means college and career readiness.”

The Good: Getting rid of NCLB accountability standards, placing more power in the hands of teachers and schools; encourages parental involvement (nice since parents are their children’s biggest teachers and should be involved in the process anyway). Bridges the divide between Washington and state governments via the element of trust.

The Bad: Small likelihood of becoming law as it’s failing to receive any bipartisan support; paints a bleak picture on the amount of money schools can expect from the federal government moving forward; has very little accountability standards for teachers and schools with regard to student achievement.

While any attempt to empower schools and teachers should be met with excitement, the Student Success Act doesn’t appear to go far enough in holding anyone accountable for anything. The problem, however, with going further than what SSA does, is that too often politicians look at “accountability measures” as something only the school and the teacher need worry about.

Students and parents are still without repercussions to poor performance, and until the federal government wises up to that, whatever legislation comes along AFTER No Child Left Behind (and actually manages to make it into law) will be equally impotent. This reality highlights the importance of students to take initiative and better themselves through more education and achievement. Now more than ever, your success must be more important to you than anyone else.