Study Group Behaviors: How You Know It’s Time To Give A Member The Boot 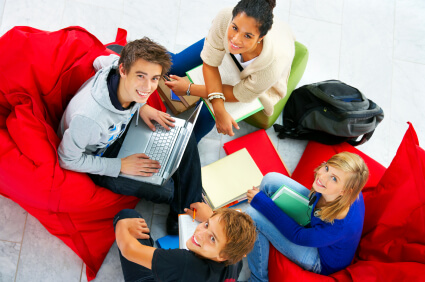 Study groups can be greatly beneficial to learning a lot of complex information very quickly. In an ideal study group, all parties are engaged, utilizing their strengths to fill in the group’s weaknesses. Members are complementary of the entire experience. They’re encouraging to one another and focused on the tasks at hand. Unfortunately, it takes only one weak link to break the chain of knowledge and ruin things for everyone. Your best bet as a group is to find people with whom you share great chemistry and a terrific learning dynamic. If you have even one person, who instead engages in these behaviors, then please — for the good of your test scores — get rid of them.

One: Poor group members bring in outside distractions.

Ever been to the movies and had the person sitting right in front of you engage in a constant texting session? It’s distracting and inconsiderate, even when the sound is shut off. For a study group to be successful, it needs all hands on deck. If one member is constantly looking down at his phone or doodling with no apparent interest in the conversation and no input to share, then it’s easy for their distractions to grow and infest the entire group. Ideally, you want the dominant air to be one of cohesiveness and engagement. Whenever these people introduce their lack of consideration for the group dynamic, it grows rapidly like a virus.

Two: They don’t pull their own weight.

Study groups are pretty pointless if one or two people are doing all the listening and everyone else is just copying what is said with no value. The whole objective of getting together is to pool knowledge and learn from one another so you can cover more information at a rapid pace. If two people are shouldering all the burden, that inevitably leads to fatigue on their parts and the realization that, “Hey, what do we need these human slugs for?” Again, all it takes is one bad apple to ruin the whole bunch. We’re not saying you all have to be equally smart, but you should be working equally hard to contribute to the group’s understanding. If you have any who aren’t, kick them to the curb.

Time is valuable to everyone in the group. When you agree on set-upon times — like, say, 5 to 7:30 p.m. every Tuesday night — then you need to do your best to be there. If you can never be there for the full time, at least make an effort not to disrupt, and be engaged from the moment that you walk in the door and take your seat. Too often, study group members show up an hour late with no reasonable explanation as to why. They set the group back as it strives to move forward. They disrupt progress and instead send the other group members veering off course as they get adjusted to their own surroundings and insert small talk as to where they’ve been and what they’ve been doing. Everyone can understand reasons like, “I’ll be a little late due to work,” or “I have to pick up my little brother from basketball practice.” They’re also more than willing to let you catch up on what was discussed while you were away. But if you’re just leaving them hanging and never taking the study time seriously, then you should probably be on your own.

Cracking jokes, flirting with other group members, text messaging instead of carrying their load of the groupthink. All these things are disruptive, sophomoric behaviors that should be dead and buried by the time you make it to high school. You do know the economy is as bad as it’s been since the Great Depression, and American students still lag behind the rest of the world in education, right? Then what makes you think you’ve got the right to act like a juvenile when your future, and the future of your fellow group members, hangs in the balance? Be considerate, and show up ready to work. If not, don’t be surprised if they stop returning your calls and texts and continually change the venue without telling you. I would.

Five: They always make the group leader(s) work too hard.

Inevitably, every study group will have one or two individuals who exhibit more intelligence and ability than others. That doesn’t mean it’s fair for them to shoulder all the work. They’re not getting paid to be instructors, so that shouldn’t be the role they’re filling. Instead, it’s important to read your sections, internalize, and explain to the best of your abilities. If you’re having trouble with something, the stronger members will be happy to fill you in as long as they don’t feel like you’re taking advantage of them. Pawning work off on other people may “work” in junior high and high school, but good luck getting them to continue playing ball when they’re forking over thousands of dollars per semester for an education. If it’s your job to take a piece of information and make it palatable to the rest of the group, then accept the challenge.

There’s nothing more aggravating than being the person that the group mooch is constantly trying to use for playing catch-up. “Can I borrow your notes?” “What did I miss?” “Will you type it up and send it to me?”

Yes. Let me do all the work for you while I worry about learning what I don’t know. What a great deal.

It’s one thing if the group mooch is making an effort. It’s another entirely if they’re engaging in one or more of the above bad study group behaviors. Don’t let these people monopolize your time. Education is not an entitlement. It is an opportunity that we either take advantage of, or we don’t.

Study groups can be the most helpful tool you have for learning and internalizing deep educational concepts. But it just takes a small dose of poison to kill their usefulness. If you’re guilty of any of these behaviors, stop it. If you’re caught in a group that allows these behaviors, move on. No one’s feelings or personality flaws are worth sabotaging your education. Best of luck finding the group that works best for you!