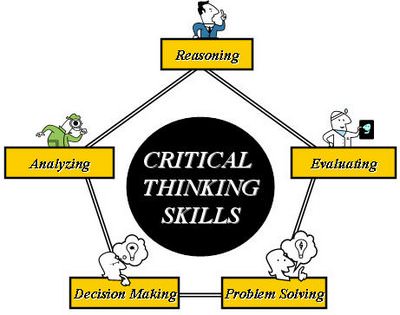 Critical thinking skills are not the easiest things in the world to come by. After all, there isn’t a book filled with memorizable information for you to pore over. You have to know more than just what you believe. You also must know facts and be able to differentiate them from the opinions and biases of others. In the world of today, critical thinking skills are more important than ever, and without them, you can make a pretty big fool of yourself.

For example, a journalist (whom we will not name) recently bit on a news story where Sarah Palin was said to have taken a job with Al Jazeera. Anyone who knows anything about Palin or Al Jazeera knows immediately how absurd such an idea is. It’s like saying that President Obama is taking a job after his second term as the president of the National Rifle Association (NRA).

Nevertheless, this journalist, who worked for the Washington Post at the time, bit on it and wrote a blog criticizing Palin as a hypocrite trying to stay relevant following her vice-presidential run. What the journalist failed to realize, however, was that the news came from a site called the Daily Currant, a self-proclaimed satirical news site.

Ms. Palin had a field day humiliating said journalist, along with most of the conservative talking heads, and the Washington Post quietly and mysteriously relieved themselves of the writer, hoping it would never again come up in the media conversation.

Point being: critical thinking skills are hard to develop, but they’re an absolute necessity if you want to find your place in the 21st Century. To help in your journey, we’ve culled these best-of tips from the Internet. Good luck, and if you have any that are helpful to you, feel free to include them in the comments section below. Let’s get started!

Tour Guide For An Alien

This particular tip comes to us from About.com’s resident expert Grace Fleming. In her own words:

“Pretend that you have been assigned the task of conducting a tour for aliens who are visiting earth and observing human life. You’re riding along in a blimp, and you float over a professional baseball stadium. One of your aliens looks down and becomes very confused, so you tell him that there is a game going on.

Try to answer the following questions for him.

If you try to answer these questions fully, it will quickly become apparent that we carry around certain assumptions and values. We support a certain team, for instance, because it makes us feel like we’re a part of a community. This sense of community is a value that matters to some people more than others.

Furthermore, when trying to explain team sports to an alien, you have to explain the value we put on winning and losing.

When you think like an alien tour guide, you are forced to take a deeper look at the things we do and things we value. They don’t always sound so logical and true from the outside looking in!”

This next tip comes from WikiHow’s Sondra C. Maluniu, and focuses on the getting-to-know-you aspects of what you believe and why you believe them. Maluniu and her team write that you have to “understand your own biases.”

“Human judgment can be subjective, frail, and spiteful. One recent study found that parents who were given corrected information about the safety of vaccines were less likely to have their children vaccinated.Why? The hypothesis is that parents given this information accept that the information is true, but push back people [because] it damages their self-esteem — something that is very important to most people. Understand what your biases are and where they may affect how you deal with information.”

The WikiHow team recommends that you think “several moves ahead,” citing Jeff Bezos, CEO of Amazon.com, who cautioned, “If everything you do needs to work on a three-year time horizon, then you’re competing against a lot of people. But if you’re willing to invest on a seven-year time horizon, you’re now competing against a fraction of those people, because very few companies are willing to do that.”

What does that have to do with critical thinking skills? Everything. You’re aware of what the norm is now, but you’re also engaging your mind to have a vision for the future. By giving yourself a vision, you are able to see how all the points connect, and that will actively engage your critical thinking abilities.

Internet marketer Jimmy Hovey shared this tip on a recent blog post, and we really connected with it. “Buy a journal and start writing! It doesn’t have to be fancy. In fact, I have been using single subject spiral notebooks for 15+ years. They cost about 99 cents each. Rather than worrying about what it looks like, focus instead on being consistent with your … journal entries.”

From a productivity and critical thinking standpoint, Hovey is absolutely right. If you’re of the digital age and not the pen-and-pencil, you may want to purchase an app for your phone, tablet, and/or computer, to better facilitate the process.

What journaling ultimately does for critical thinking skills is this: it forces all the cluttered thoughts in your head to escape into the outside world in a form that is both visible and “safe.” From there, your head is able to take the random pieces, get organized, and work them all into coherency — critical thinking required every step of the way!

Critical thinking skills are ultimately the things that will set success stories apart from the rest. While not every subject is the same, you will use these in every classroom, lab, or field study that you take part in. You’ll use them in your relationships and personal life as well. Which techniques work for you?