10 Educational Mishaps That Will Make You Feel Better About Yourself 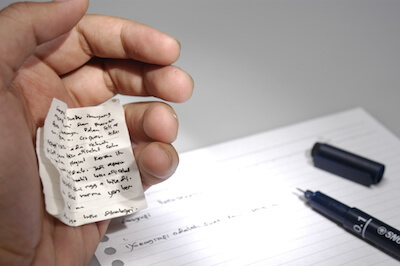 If you ever go looking for nuggets of educational gold on Reddit, you’re sure to find them. From deep, thoughtful discussions to real-world examples of school daze buffoonery, you will not be disappointed. It was a search for the latter that led me to this gem from user Burtttta.

“Back in grade 7 I cheated on my test by copying from the girl in front of me; unfortunately, I also wrote her name on my test. Has anyone else done something so stupid they couldn’t believe they actually did it?”

That story in itself is Reddit Gold, but as it turns out, Burtttta was not alone. To date, there have been more than 3,300 comments sharing embarrassing similarities. We could literally do several blog posts on this, and each would be equally entertaining. For now, we’re going to focus on the remaining nine educational mishaps that drew the most laughs around our offices.

1. “This guy [in] my sophomore math class decided to copy a test from the girl next to him and he got a zero. He complain[ed] that he did nothing wrong and that the teacher was being bias[ed] because he usually had only Ds but he knew he had studied for that test and he was sure he had an A. This went on for at least 10 minutes until the teacher finally gave up and told him: It’s true you had an A for this test; the problem is that your test was test A and you gave all the correct answers for test B.”

2. “When I was about 6 or 7 years old, I was obsessed with Bill Nye The Science Guy. Every day after school, I would come home and watch Bill Nye before doing homework. Well, one day, after watching ‘The Water Cycle’ episode and learning about evaporation, I got the brilliant idea that I was going to attempt to make water evaporate in my own kitchen.

“So, I filled up my favorite Spiderman plastic cup with water, placed a paper towel over the top of it, and attempted to place it in my microwave. Unfortunately, I was too short to reach it, and didn’t know how to use it. However, I did know how to use the toaster oven.

“So what did I do? I placed the paper towel-plastic cup-evaporation experiment in the oven, and cranked the knob as far as it would go. Then I went back to watch Wishbone on PBS.

“About 60 seconds later, the smoke alarm starts going off, and my mother who was upstairs showering after work, comes sprinting down the stairs wrapped in a towel with shampoo still in her hair. We both run into the kitchen, and see that my experiment is on fire. Thankfully, we had a fire extinguisher in our kitchen, and my mom was able to put out the fire while I stood there screaming because I thought we were going to die. So what were the results of the experiment? I destroyed my favorite Spiderman cup, and I was not allowed to watch TV for a few days. I did significantly less experiments after that.”

3. “I once got into a heated debate with my friend because he tried to tell me that Washington D.C. was a state.”

4. “Today, my Geometry class was in the library working on a project. One of the computers was without a tower (not working correctly I presumed.) Anyways, I sat down at that computer, turned the monitor on, and sat there for a good minute before realizing that there was no tower. To make it worse, there were people sitting around me…”

5. “In science class … I decided to check how hot the fire from a bunsen burner was. So, I stuck a thermometer in the blue flame until it inevitably exploded, shrapnel launching onto my partner’s arm. I was told to sit down and do nothing for the remainder of class.”

6. “I had to do a family tree assignment in 4th grade. She specifically said ‘BIOLOGICAL FAMILY, HAS TO BE AT LEAST 8 PEOPLE’ and me, with my mom, my dad being adopted, and my grandparents the only close family I have, I put random celebrities on the places where other relatives would go. She took one look at me, and laughed when I presented her the paper. I got an F.”

8. “Language class on a sunny afternoon. The teacher (nun who is also my hostel warden) was explanining some poetry. Slowly her voice began to fade away. I could hear some distant songs. Don’t remember when I fell asleep. I woke up sometime to the end of the session. Overcome with embarrassment for falling asleep I was desperate to show that I was awake and attentive. Then I heard her ask ‘Has anyone ever seen a rabbit?’ An excited me raised [my] hand ”Me! Me!’ Co-benchers murmuring put your hand down, front benchers astonished, teacher annoyed. I am wondering … why is it so hard to believe … I can swear I had two pet rabbits. The teacher exclaimed, ‘You must be kept in a museum!’ Bewildered, I put my hand down. Later I came to know that the question was ‘Has anyone ever seen a rabbit with three ears?'”

9. “I cheated through all of my A Levels (not proud of it, but after having been banned from attending classes and blah blah it seemed the best option to 17-year-old me.) Anyways, I had managed 9/10 of them flawlessly … got the thumb drive into the exam, got it into the computer without being seen … wrote the paper and deleted the evidence. My last exam, I finished it, deleted the cheat sheet and saved the document. Time goes by, I realize I have some free time so I undo the delete to add more info. Forget to delete it again. I printed off my work to hand in and reams and reams of cheat sheet came off the printer in front of the examiners. Needless to say all my exams that year were made void.”

If you don’t wish to turn out like the individuals above, it’s best to heed their warnings. Be involved in your education. Attend class. Don’t take unnecessary chances or develop a false sense of security. That’s it for us. What are some of the dumbest educational mishaps that you’ve ever perpetrated or know about? Share in our comments section below.