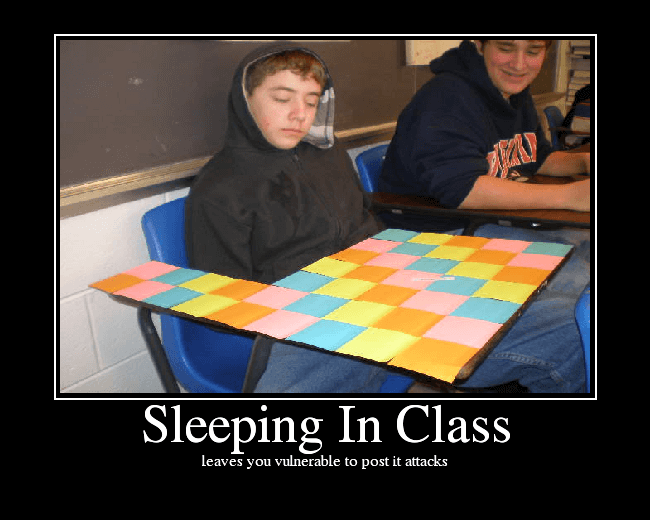 College is a crucial point in the road to your future, and it’s a responsibility that too many students aren’t ready for when they first arrive. Most of the bad habits that keep people from being at their best begin in high school — both directly and indirectly — and it can make it difficult for an individual to ever recover. Thankfully, a user on Reddit asked the question of other users, “What’s the one high school habit each incoming freshman needs to stop doing on their first day of college?” The responses were far too many to list, extending to more than 11,000. However, we have gone through and picked some of our favorites. Heed the advice and make sure that you check out the thread to read the rest.

No, missing a few classes here and there won’t destroy you, but it starts a bad habit that can manifest itself on test day. One Reddit user has a clever suggestion for how to avoid the alarm clock blues. “I always recommend to people on day one that they buy an extra alarm clock that is battery operated. If the power goes out, or you forget to charge your phone, you’re still covered.” Another adds that the alarm clock “needs to be OUTSIDE of arm’s reach.”

“If you are too tired you WILL turn off the alarm and go back to sleep and you WILL NOT REMEMBER that you did this. More than likely you’ll wake up thinking you just forgot to set it or that it failed when in truth you rolled over, turned it off and rolled right back into sleep,” he adds.

As an extension of the sleeping in faux pas, a commenter made this very good point about teacher/professor respect. If you are late to a class of 50 or fewer students, he says, “walk up to the professor at the end of class and apologize for being late.”

“This goes a long way, just don’t make a habit of being late. Conversely, if you are in a stadium class, DO NOT do this, as you likely weren’t noticed and announcing your tardiness only makes you look foolish. … I want to clarify, ‘apologize,’ not ‘apologize and give an excuse.’ Big difference there.”

Also, for a personal addition to this, I would like to add that it doesn’t just mean being on time to class and taking the work seriously. It also means being respectful in class, trying to participate, putting forth your best effort on homework assignments, and scheduling time outside of class to meet with your professor if you’re not doing so hot. Again, this isn’t high school. Professors are in charge and under no obligation to pass you because your Mom or Dad will show up, stomp around, call them dumb, and throw a fit. That stuff, unfortunately, works in high school to a degree. It’ll just get you laughed at and made fun of in college.

This goes along with what I just said above about scheduling time to talk with your professor outside of class. A commenter adds that if you’re struggling, you should not wait until it’s too late to get help. “If you’re struggling, don’t wait to get help. Seriously. If your school is halfway decent, there is at least one other resource outside of your professor that you can consult for tutoring. You will regret letting your pride and/or laziness get in the way of passing a class.”

4. Separating yourself from loved ones.

In high school, it can be construed as embarrassing to show love and affection towards your family — namely your parents. Don’t take this attitude with you to college, warns one commenter. “Stop being so embarrassed when your family phones you/comes over. They probably live very far away and came here to see you, show them some love.” To this a separate commenter agrees and adds, “Hug them when they leave, even if you’re in front of a bunch of people. No one will ACTUALLY look at you and think you’re a loser for hugging your parents.”

5. Thinking your past accomplishments entitle you to special treatment.

In college, the past is in the past. You’re preparing for the future. It doesn’t matter that you were prom king or head cheerleader or the all-star running back on your football team. Notes a commenter, “acting like you’re the coolest kid around is extremely annoying. No one cares about how much you drank last night. If it’s that impressive people will brag for you.”

6. Thinking you can talk salty because you’re ‘an adult now.’

This was certainly a pet peeve of mine back in the day, and it appears to be one for a fellow Reddit user. He even says it. “My pet peeve freshman year was when kids would regularly swear when addressing professors because ‘we’re all adults now.'” To this, another adds this disturbing story that landed a genius freshman on academic probation: “My sister told me a kid in one of her classes swore while answering a question. The professor asked him to ‘watch his language’ and the student replied ‘freedom of speech, n*****.’ Yes, the prof was black, and he was NOT happy.” Bottom line: “acting like an adult” because you can means acting like an idiot much of the time. This is a misconception of what being an adult actually is, and if you use your new status to buck the tendency towards professionalism, you will be looked down upon.

As one professor explains in the thread, “Don’t plagiarize. We’ll catch you. If we do, fess up! The first several times, the students said ‘I don’t know how that happened.’ Remember that uncommon knowledge should be cited.” This one is so true especially in the Internet age. All you have to do as a professor is pull a phrase that sounds outside the realm of your class’s vocabulary and do a Boolean search on Google. Busted.

8. Failing to fight for your grades.

In high school, you might be happy just passing a tough course and moving on with life. College transcripts, however, will follow you around the rest of your life. “Do every bit of extra credit offered,” explains a commenter. “If you can redo a bad test for extra points, do it. If you can earn extra points for volunteering at some weird event, do it. If you get extra credit for attending every class session, go to every class session. Use every advantage they give you because every single extra point counts. I’m old and back in school but as an example, in one of my classes, I did so much extra credit that I only needed a 20% on the final to get an A in the class. That knowledge is incredibly valuable when you have three other finals the same week.”

Those were some of the freshman habits that stood out to us. What are some that you would have included on the list? Share your picks in our comments section below!