11 Graphic Novels That Should Be Taught In Schools 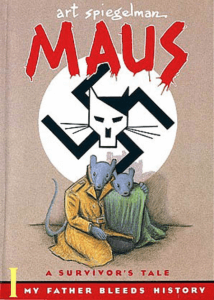 Graphic novels have started to earn respect among critics, but their widespread adoption as “acceptable literature” in schools still has some way to go. Mostly it’s about overcoming the “funny book/superhero” stigma that has followed them around for the better part of a century. Fortunately, the work itself has already overcome said stigma. Now it’s just waiting for the education arena to catch up. To help, we’ve put together a list of 11 graphic novels that should be taught in schools. Many of you forward-thinking teachers may already have some of these in your sights, but if not, we hope it helps! Of course, do a check first to make sure the content won’t cause trouble for your particular age group’s parents. Let’s get started!

Jeff Smith’s sweet, fun, and ultimately touching children’s epic Bone uses a nice blend of dark fantasy and sidesplitting humor to tell a story of surprising emotional depth especially for the age group at which it’s aimed. The series ran for 13 years in 55 individual issues, which have been collected multiple times.

Epileptic from creator David Beauchard (David B.) and Fantagraphics Books is a wonderful example of the graphic novel as memoir. It tells the story of the artist’s early childhood and adolescence, focusing on his relationship with his brother and sister. According to the official synopsis, his brother develops severe and intractable epilepsy, causing the family to seek a variety of solutions from alternative medicine, most dramatically by moving to a commune based on macrobiotic principles. As the epileptic brother loses control of his own life, the artist develops solitary obsessions with cartoons, mythology and war. It’s a fascinating look at the power of mythology set against the backdrop of some very real-world traumas.

9. A Contract with God

Will Eisner is par excellence for the graphic novel medium, and A Contract with God is one of his greatest works. The comics legend — and man behind the Spirit — published this in 1978. In it, the main character creates a stone-carved contract with God to “live a good life.” Once he moves to New York and adopts a child abandoned on his doorstep, the contract gets a real test. The child gets sick and dies and our hero becomes incensed, blaming God for “breaking the contract.” The story evolves into an “exorcise of personal anguish” and is heart-wrenching in every regard, but well worth a look for young minds trying to make sense of their own personal turmoils.

8. Pyongyang: A Journey in North Korea

Guy Delisle penned this intimate and disturbing portrait of North Korea that will shock and unnerve more on what you don’t see than what you do. Delisle based his tale on a personal trip to the location itself where he noticed a surprising lack of dissent and an absence of elderly people. Delisle admits that he wrote and drew Pyongyang in Ethiopia and says that he has no desire to go back to North Korea on account that he would “not be very welcomed there.” Even so, it’s a must-read on-the-ground account about what is perhaps one of the world’s greatest enemies.

7. Onward Towards Our Noble Deaths

Shiceru Mizuki published this account of his simultaneously boring and terrifying time in the Japanese army during World War II. It’s important to get a sense of the human experience from every angle, making this a must-teach graphic novel for the poignant and humanizing stories behind enemy lines.

6. The League of Extraordinary Gentlemen

Could you find better Alan Moore to share? Yes, but probably not as accessible. Moore is a brilliant writer, but much of his work — especially through a visual medium like comics — would send parents into a tizzy. While LXG is more mature than many superhero titles, there is still a lightheartedness to it that makes it great fun, and it’s also a wonderful account of how classic literature still influences popular works today.

Ghost World tells the story of two pessimistic teenage girls with a drab but hilarious view of the world. Daniel Clowes, the book’s author, signed off on the popular independent film in 2001, actually co-writing the script with the film’s director. This was rare for the film industry to take this kind of a chance on a comic book work at the time. (Now it’s common practice to be faithful to source material.) Clowes’ language captures the angst of teen life and the quiet anguish of growing up.

It’s a Good Life If You Don’t Weaken is another autobiographical tale by “Seth,” the artist. It details his efforts to learn more about a deceased artist with whom he feels a kinship. Any generation that finds themselves trapped in the rabbit hole of information that comes with looking something up on Wikipedia and taking it from there will appreciate this. Seth’s journey goes way beyond this, leading him to a compelling though ultimately disappointing end. Still, it’s the journey that matters.

Craig Thompson comes from an evangelical Christian background and shares this autobiographical coming-of-age tale as a result. Because of the religious overtones, some which can be construed controversial, you might want to be careful with this one at the secondary level, but it’s excellent for college students coming to terms with their own beliefs system.

Persepolis 1 and 2 by Marjane Satrapi shed new light on a part of the world that left many Americans uneasy, especially post-9/11: the Middle East. Satrapi’s memoir humanizes the Iranian people and offers much-needed criticism of the country’s intense patriarchal culture as Satrapi grows up amid the Islamic revolution. With all the tensions that still exist between the two cultures, these books are a nice connection to the humanity in us all.

Art Spiegelman’s masterpiece of World War II history as told through the eyes of animals (each representing a race with Jews mice, Nazis cats, Non-Jewish Poles pigs, etc.) was the very first graphic novel to win a Pulitzer Prize in 1992. It was originally published from 1980-1991.

Which graphic novels do you think should be taught in schools? Sound off in the comments section.