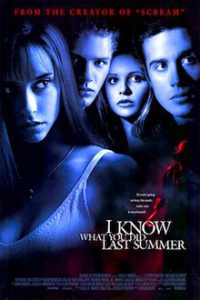 Horror movies aren’t usually a topic you’ll see turn up on a site like 4Tests, but every Halloween, it’s tough not to get into the spirit. And since we like to share some reading recommendations from time to time, we thought we’d marry the two for a very “scholarly” celebration of the movies you may want to read first.

That’s right. These teen horrors started out as books, and in many cases, they’re just as — if not more — scary as their motion picture counterparts. So in the spirit of the holiday, here are some horror movies you can add to your reading (?) list. Ah, just go with it.

1. I Know What You Did Last Summer by Lois Duncan

Lois Duncan wrote I Know What You Did Last Summer in 1973 — 24 years before director Jim Gillespie and Scream writer/creator Kevin Williamson adapted it for the silver screen. As a movie, it’s great fun. As a book, ditto. The two are very different in outcome, though not much different in tone. Nevertheless, Duncan was not impressed and complained in subsequent updated editions of how the movie was too gory and mean-spirited when compared to her original novel.

Despite that, you’ll have a good time with both versions of I Know What You Did Last Summer. Give it a shot (along with Duncan’s other works) when you get the chance. Like, perhaps, on a certain spooky holiday?

2. The Fury by John Farris

John Farris is a horror author who churned out some really solid work throughout the 1970s and ’80s. Catacombs, Bad Blood, The Trouble at Harrison High. Perhaps his most effective work of horror-centric fare was the 1976 novel The Fury. The Fury was made into a film of the same name directed by Brian DePalma (Carrie) and starring Kirk Douglas, Andrew Stevens, Amy Irving, and John Cassavetes. The book reads quickly, and both center on teenagers with telekinetic powers.

3. The Girl Next Door by Jack Ketchum

Just when you think you can’t see anything more disturbing than the 2007 film based on the real-life torture and murder of a teenage girl by some of her peers, you find out it was based on a novel by Jack Ketchum that is so much worse. The actual case was equally heartbreaking and has been made into another film starring Catherine Keener called An American Crime. Other books have been written on the topic as well. TGND (book and movie) are the ones that really punch you in the gut, though.

A top-of-his-form King, also a high school English teacher when he was writing this, was still close enough to his source material to turn out a great horror novel in this endeavor about a bullied young woman with telekinetic powers that turn deadly. DePalma’s star-studded film adaptation is a classic of the horror genre. Watch it, read the book, and forget the other film attempts (two remakes and an unofficial sequel).

5. Let Me In by John Ajvide Lindqvist

Let Me In, or Let the Right One In, is a young adult horror novel for adults. It perfectly captures the torment and inadequacy of growing up, but it has enough gore and disturbing images to settle firmly into the “mature” horror section of your local bookstore. This is one of those rare cases where both the foreign and Americanized film versions are masterpieces in their own rights. We heavily recommend starting with the Lindqvist original (or its quality translation).

6. The Funhouse by Dean R. Koontz

The Funhouse is kind of a letdown as a movie, but when Koontz wrote the original novel — released before the film — he added enough harder horror elements, not to mention his own deft literary touch, to make it a worthy excursion into terror. Honestly, this is one scenario where you might be better-served just reading the book. But as a one-time oddity — particularly for those of you who watch Stranger Things — a film viewing might be in order.

7. The Beast Within by Edward Levy

Edward Levy’s book is worth reading because of just how different it is from the 1982 filmed version. Both tales are pretty horrific and deliver a southern-fried horror that plays into pretty much every stereotype you can think of. Nevertheless, it’s just the right amount of seedy to make you want to turn the next page, book-wise. When you get to the movie, there is some pretty solid practical FX that make it worth checking out, not to mention an utterly crazy finale that is worth the price of admission.

Carmilla was a predecessor to Dracula and served as a template of sorts for Bram Stoker. Thanks to the success of Stoker’s Dracula, people have continued to rediscover it once they realize the heavy influence that it was. And like Dracula, it has been filmed many, many times. Start with the book; then choose your film adaptation wisely because there are some real stinkers out there.

9. The Entity by Frank De Felitta

The Entity made for a horrifying 1983 vehicle for Barbara Hershey, and rumor has it that James Wan (Saw, Insidious, The Conjuring) is about to produce a remake. Before you get into either one, De Felitta’s print version is worth checking out. He knows how to delay the horror until just the right moments and keep you turning those pages into the late hours of the night.

10. The Bad Seed by William March

March’s mid-century tale of a child who is inexplicably evil had a lot to say about the argument of nature-versus-nurture, and it inspired countless adaptations or derivatives including the 1956 original film adaptation of the same name, a 1980s TV version, a gender-switch ’90s version starring Macaulay Culkin (The Good Son), and, perhaps the most bonkers-fun version, Orphan from 2009. Get your hands on the book first before switching over to the film versions. They’re all worth checking out — well, all except the TV version maybe.

11. The Hellbound Heart by Clive Barker

Before there were a jillion Hellraiser movies, most of which were filmed on a $153 budget, there was the successful big screen adaptation from 1988 and its source document, the short novel — or novella, really — called The Hellbound Heart. Barker had such an imaginative vision as a writer, that even back in the ’80s when Hollywood Hollywoodized every book they got their hands on, the powers that be had the good sense to turn the creative control over to Barker. The result speaks for itself and has spawned a surprisingly durable — though not often competent — set of movies.

12. The Exorcist by William Peter Blatty

Every kid in high school feels misunderstood at some point in their young lives, and Regan from The Exorcist is no exception. But in her case, she’s not just going through the changes of growing up. She has an actual demon inside of her. The late William Peter Blatty penned both the book and the film’s screenplay, and it shows in how well the movie was able to translate the book’s creepier elements. While nothing can quite prepare you for the torrents of obscenity, the projectile vomiting, or the fully-rotational head-spinning, the book has psychological elements that make it a disturbing good time as well.

13. The Lovely Bones by Alice Sebold

The Lovely Bones is equal-parts mysterious, horrifying, romantic, and gut-wrenching. It tells the tale of a grieving family and the young murder victim that is the object of their grief, and it all unfolds from her perspective as she seeks to give comfort and make sense of what happened to her and her family when a serial killer placed her in his sights. To be honest, the movie isn’t that great, but the book is superb and once you read it, you don’t forget it.

Unbelievably stupid title but not a bad werewolf tale if taken in its print form. The movie isn’t as bad as its poor box office performance would have you believe, but it doesn’t really do anything to stand out either, and it commits the cardinal sin of straying from the book a bit too often. If you’re a fan of quick frights, a little romance, and bullet-fast copy, author Annette Curtis Klause has more to offer than the 2007 film adaptation.

Zombies, romance, and teen angst in one funny and sometimes touching package. Both the film and the Isaac Marion novel are a good time. Start with the book, though.

16. Flowers in the Attic by V.C. Andrews

Flowers in the Attic is as lurid today as it was when Andrews first published it. It wasn’t the only book in the series, but it was by far the most memorable with its themes of incest, religious fanaticism, and sadomasochism. Geared towards young adults, the book understandably caused controversy upon its debut. The 1987 film version captures many of those elements but strays too far to not aggravate. The 2014 film is a bit better, though it’s a Lifetime Movie at the end of the day, and it obviously suffers from those limitations.

The 2016 film Nerve is a decent thriller with mystery elements that prove more effective in the written version by Jeanne Ryan. It centers on a usually non-adventurous teenage girl who gets wrapped up in a massively multiplayer online game where her actions are manipulated by anonymous “watchers.” Ryan’s prose is clean and turns the novel into a real page-turner. The film is faithful enough but just doesn’t seem to translate everything with the same passion. Nevertheless, it proved successful at the box office with around $85 million worldwide on a $19 million budget.

Gaiman is one of those rare authors who can delve into some pretty creepy stuff without crossing too many lines. In Coraline, he presents a relatable and at-times-terrifying story that remains accessible to younger audiences. The animated film succeeds here as well, making both film-and-book Halloween musts.

Hope You Enjoy These YA Horror Movies, er, Novels

Okay, so they’re not all YA horror movies when brought to the big screen, but each one has something that’ll keep you on the edge of your seat and sleeping with the lights on. Now it’s your turn — what horror movies that were first books do you prefer? Sound off in the comments section below.