Your General Educational Development test (commonly referred to as the GED) is essential for being able to break free from high school and prove you’re ready for college or advanced skills training. Most high school dropouts don’t become the millionaire success stories that you read about in the occasional news article. These are the outliers. The people who defy the rules. And chances are, if they did become successful without a high school diploma or GED equivalent, they got there because they worked about 10 times harder to understand whatever it was they ended up mastering. Unless you have genius in the upper 90th percentile, chances are very likely you’ll need your GED/diploma. And when it comes to completing high school training, math is vital.

In fact, a recent Gallup poll found that most Americans view math as the most important school subject, so it’s especially important to bring your A-game when it comes time for this portion of the GED. While it’s difficult to condense everything you need to know into just a few words, we’ve put together our 4 Favorite GED Math Hacks That Will Speed You Up Without Dragging You Down. Let’s get started!

Canceling Out When You Multiply Mixed Numbers

Working with mixed numbers can be somewhat intimidating if you don’t have a mind for math. The good news is that you don’t have to have a mind for math to master a few simple tricks in simplifying numbers and solving problems more quickly and accurately. In the case of mixed numbers like 3 1/3 or 2 1/4, learning how to cancel out is greatly beneficial if you plan on doing operations like multiplication. 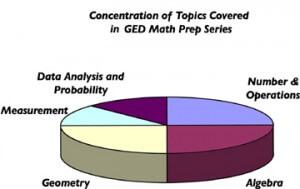 In order to accurately multiply these mixed numbers, you’ll first want to convert the problem to a fraction. Doing so requires you to be familiar with basic rules of multiplication and division.

In converting, you’ll want to first take the denominator from the fraction part of the mixed number (the bottom number) and multiply it times the whole number to the left. Then, take the product of that multiplication and add your numerator (the top part of the fraction).

That final number will go over the denominator to form an often top-heavy fraction. Let’s use 25 1/3 as an example.

Once you do the same to 10 3/4, you’ll be left with 43/4. Congrats! You can now multiply the two — numerator times numerator and denominator times denominator.

You can cancel out.

Here’s how that works. If a numerator from one fraction and a denominator from the other can be divided evenly by the same number, then you can automatically reduce the size of the finished product.

Using this line of thinking, let’s take a look at our 76/3 * 43/4 problem. Three and 43 cannot be divided evenly so they cannot be canceled. Seventy-six and 4, however, can each be divided by four.

When you’re trying to beat the clock on the GED Math test, it can be frustrating to run in to problematic multiplication problems like 19 * 18 or 14 * 13. Never fear. We have a pretty cool trick for you to remember. Of course, it only works when you’re multiplying two 2-digit numbers up to 20 * 20, but you’ll be surprised how often that actually happens.

When you have a problem like 19 * 18, instead of screwing your scratch paper completely up, you can add 19 + 8 instead. Notice you’ve dropped the one (1) from one of the 2-digit numbers and converted the problem into simple addition. This gives you the number 27.

And the reason it works is because you’ve taken a more complex problem and broken it down into a series of quick, much simpler steps. As you continue on through the GED Math portion, be watching for ways you can do this in other areas.

Multiplication Rules Of Ten And Eleven

But did you know multiplying any two-digit number times 11 is just as simple? For example, take 42 * 11. Now one way of simplifying this problem is multiplying 42 and 10 to get 420, then adding one more 42 to that for good measure, arriving at the final answer of 462.

But it gets even simpler than that if you follow the rule of 11. What this rule states is that in any two-digit number multiplied by 11, you can simply add the two digits together, insert the sum in between the original digits and arrive at your answer.

This rule holds true for any case where the two-digit number adds up to less than 10. If the sum is 10 or more, you just make one simple tweak to keep pace.

Calculating the square root of a number is a lot of fun when they’re throwing fours and nines at you. But invariably on the GED, some wisenheimer always has to go off and give you a five (5) or a 10. So what happens when finding out the number’s square root becomes messy?

Okay, get ready because this one isn’t a simple one- or two-step thing, but it’s still easy to follow when you’re in a time crunch and can’t use a calculator.

Start with the number for which you’re trying to solve. Just to show off, we’ll pick 82. Now if you’re familiar with square roots, you know that 82 is a messy one to calculate. No worries. Choose the next closest number below it that can be squared. In this case, it would be 81. This number will be considered your estimator.

Take the square root of your estimator and, in this case, you’re left with nine (9).

Multiply that number times two (2). That leaves you with 18.

Remember that the GED is an equivalency exam. It’s not an “easy way out” of high school, though many find it to be more palatable than putting up with all the high school drama that surrounds the actual learning process. In fact, a growing number of people are intentionally taking the GED early to speed along their advancement to college or advanced skills training. Even so, it’s not a test for dummies. If you can pass it, then you’re ready for the next chapter of life. And if you can do well on math, then you can do well in life. While the tricks we’ve shared won’t be all that you need to know going in, they can certainly help you ease the pressure and the annoyance of larger numbers and operations.

Do you know of any great GED math hacks that you’d like to share? If so we would love to hear them. Share in the comments section below.