I know developing a love for reading late in the game can be hard. I didn’t read my first novel until I was in the 10th Grade, and the only reason I did so then was because Ms. Hampton forced me to. The only way I was able to overcome that disdain for walls of text, page after page, was through the visual medium. Thanks to comic books and graphic novels, I was able to eventually make the jump to prose for pleasure. If you’re the same way, then I’d like to share some graphic novel adaptations of classic literature that are worth your time. They are: 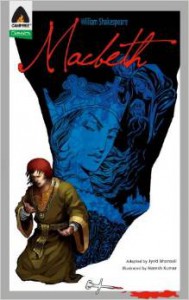 This is my favorite Shakespeare play, and probably the bloodiest. For the Bard, it was the closest he came to writing a horror story in his legendary career. Of all the adaptations out there — and there are several — my favorite is this one from Campfire.

Synopsis: ‘Fair is foul and foul is fair’ – so said three weird women in ghoulish glee, predicting a subversion of order in fair Scotland…

In the reign of King Duncan, Scotland is a just and hospitable land, with loyal, warlike thanes guarding the best interests of people…

…’Till the very best among them, Macbeth, gives in to a fatal temptation and commits regicide. But will the crown of Scotland sit easy on his head? Will justice be restored to Scotland? Or will Macbeth remain invincible?

One of Shakespeare’s most famous plays, Macbeth goes beyond a mere tragedy of moral order to a deeply psychological study of a mind preyed on by ambition, insecurities, fear, and regret. 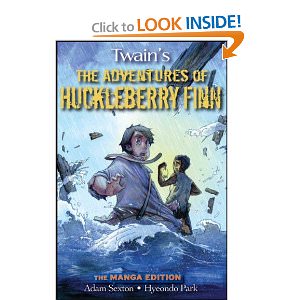 I’ll admit that to this day, I don’t share the same affection for The Adventures of Huckleberry Finn that most English teachers do. Written in a disfigured Southern dialect, it’s pretty hard to follow in places, and not altogether accurate. Living in the South my whole life, I’ll say that Mark Twain’s attempts to show off his down home wit and sarcasm were overblown. Nevertheless, the novel endures, and if you have as hard of a time with it as me, this manga edition is a great way of getting the characters and timeline solidified in your head.

Synopsis: Two labeled outcasts—a prisoner of “civilization” and a runaway slave. An elaborate ruse. A risky escape down the Mississippi River. A harrowing encounter with murderers, thieves, and schemers. A dangerous battle between right and wrong. Racism, prejudice, and shocking truths.

This fast-paced manga edition gets you in on the action of one of the most controversial novels in American history. 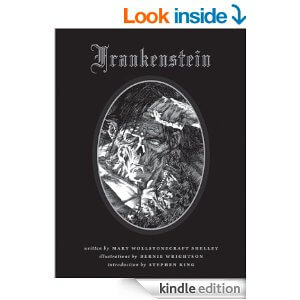 As with the Macbeth adaptations, there are several for Mary Shelley’s Frankenstein, and most of them are subpar. The one exception, for me, is this edition from art master Bernie Wrightson. His style fits the story to a tee.

Synopsis: Few works by comic-book artists have earned the universal acclaim and reverence that Bernie Wrightson’s illustrated version of Mary Wollstonecraft Shelley’s Frankenstein was met with upon its original release in 1983. Twenty-five years later, this magnificent pairing of art and literature is still considered to be one of the greatest achievements made by any artist in the field. This book includes the complete text of the original ground-breaking novel, and the original forty-seven full-page illustrations that stunned the world with their monumental beauty and uniqueness. 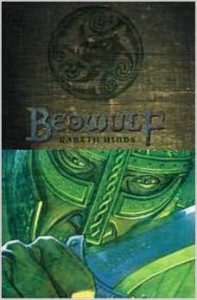 Beowulf, too, has been oft-adapted, but Gareth Hinds proves to be the most passionate in both his writing and drawing. The Beowulf of Hinds lives in a beautifully rendered world as stark, terrifying, and heroic, as the epic itself.

Synopsis: The epic tale of the great warrior Beowulf has thrilled readers through the ages — and now it is reinvented for a new generation with Gareth Hinds’s masterful illustrations. Grendel’s black blood runs thick as Beowulf defeats the monster and his hideous mother, while somber hues overcast the hero’s final, fatal battle against a raging dragon. Speeches filled with courage and sadness, lightning-paced contests of muscle and will, and funeral boats burning on the fjords are all rendered in glorious and gruesome detail. Told for more than a thousand years, Beowulf’s heroic saga finds a true home in this graphic-novel edition. 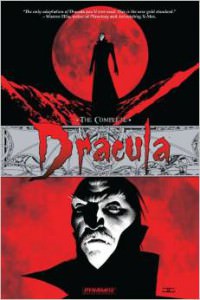 Dracula may have appeared in more comics and graphic novels than any other literary character. (I’d bet a year’s salary on it anyway.) With The Complete Dracula, you get a wonderfully faithful adaptation in brutal, full-blooded images that do the best job of bringing Bram Stoker’s lengthy horror tome to life.

Synopsis: If you thought you knew the complete story of Dracula, prepare yourself for a never-before-seen tale that is completely faithful to Bram Stoker’s original vision! Authors Leah Moore and John Reppion, joined by atmospheric painter Colton Worley, present the iconic masterpiece of gothic horror for the first time with its original beginning and ending, restored after 112 years to include the opening chapter, “Dracula’s Guest,” and revealing the ultimate fate of Dracula’s castle. Beautiful yet terrifying, The Complete Dracula is the definitive visual interpretation of the classic work, supported by a bonus section of scholarly essays, annotations, and an original prose tale from Stoker himself! 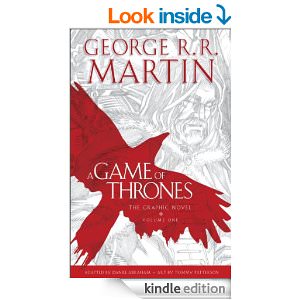 1. A Game of Thrones: The Graphic Novel: Volume One, Adapted By Daniel Abraham, Tommy Patterson

Okay, so there are several graphic novel adaptations for A Game of Thrones, but you have to start somewhere! This entire series is worth your time if you find George R.R. Martin’s prose too dense for your busy life. And while these books may not have been around long enough to be firmly established as “classics,” we believe the writing is on the wall. He will one day be taught in schools if he’s not already.

Synopsis: You’ve read the books. You’ve watched the hit series on HBO. Now acclaimed novelist Daniel Abraham and illustrator Tommy Patterson bring George R. R. Martin’s epic fantasy masterwork A Game of Thrones to majestic new life in the pages of this full-color graphic novel. Comprised of the initial six issues of the comic book series, this is the first volume in what is sure to be one of the most coveted collaborations of the year. Winter is coming. Such is the stern motto of House Stark, the northernmost of the fiefdoms that owe allegiance to King Robert Baratheon in far-off King’s Landing. There Eddard Stark of Winterfell rules in Robert’s name. There his family dwells in peace and comfort: his proud wife, Catelyn, his sons Robb, Brandon, and Rickon, his daughters Sansa and Arya, and his bastard son, Jon Snow. Far to the north, behind the towering Wall, lie savage Wildings and worse—unnatural things relegated to myth during the centuries-long summer . . . but proving all too real and all too deadly in the turning of the season. Yet a more immediate threat lurks to the south, where Jon Arryn, the Hand of the King, has died under mysterious circumstances. Now Robert is riding north to Winterfell, bringing his queen, the lovely but cold Cersei, his son, Prince Joffrey, a cruel, vainglorious youth, and the queen’s brothers Jamie and Tyrion of the powerful and wealthy House Lannister—the first a swordsman without equal, the second a dwarf whose stunted stature belies a brilliant mind. All heading for Winterfell and a fateful encounter that will change the course of kingdoms. While across the Narrow Sea, Prince Viserys, heir of the fallen House Targaryen, which once ruled all of Westeros, schemes to reclaim the throne with an army of barbarian Dothraki—whose loyalty he will purchase in the only coin left to him: his beautiful yet innocent sister, Daenerys.

Those are our picks for the perfect graphic novel adaptations of classic literature. Which ones did we leave off the list? Share your contributions in our comments section!

[All Images from Amazon]