7 Skills That Should Be Taught In Every Class 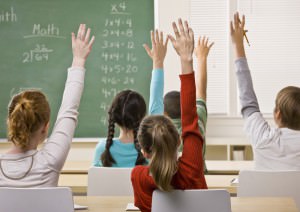 Teachers come under fire all the time for “not doing their job” from people, who don’t really understand what the job is. Under the current system of education, a teacher is responsible for teaching the curriculum in their subject area and getting students ready for state testing. They’re pushed by administrators and politicians to adhere to a strict base of knowledge instead of focusing on the things that really make a difference. If every teacher could bring the following 7 Skills That Should Be Taught In Every Class to the table, then the American education system would be in a better position.

Too often, the system seeks to protect children from rejection and failure. Many have decried the “every kid gets a trophy” mentality of our society, but apparently, that’s the way society wants it because there haven’t been many signs that change is on the horizon.

In a 2012 column from Huffington Post, author Michael Sigman writes “America’s ‘everyone gets a trophy’ syndrome has become a national joke. ‘A’ grades, which once conveyed excellence, are now given to 43 percent of all college students, according to a study by grade-inflation gurus Stuart Rojstaczer and Christopher Healy. This is an increase of a staggering 28 percentage points since 1960 and 12 percentage points since 1988. The study also reveals how easy it is to buy college credentials: a scandalous 86 percent of private school students, it turns out, get nothing lower than a ‘B.'”

Sigman makes a good point. Every politician, on both sides of the aisle, decries how poorly the US education system is doing — most recently President Obama in his speech commemorating the 50th anniversary of the MLK “I Have A Dream” speech — yet apparently students today are getting better grades than they ever have been. Either we’re not as bad off as everyone would have you to believe, or we’ve lowered the bar (extremely low) so that today’s students won’t have to deal with the possibility of failure or rejection.

Teachers have fought against this mentality for years, but they’ve been boxed in by administrators, who are too afraid of the legalities behind failing a student, even when the student deserves it.

2. Accepting Nothing Less Than The Best

Going back to Sigman’s column, an “A” at one time meant excellence. Today, in many classrooms across the country, it simply means a student is the best of their group. “A” work today, in some schools, would have garnered a “B” or a “C” 25 years ago.

And as Signman points out, this does nothing but harm to the youth of today. “Grade inflation promotes ego inflation, the opposite of healthy self-confidence,” Sigman said.

In The Narcissism Epidemic: Living in the Age of Entitlement, author Jean M. Twenge adds, “We want to encourage effort, especially among young kids … But the ‘everybody gets a trophy’ mentality basically says that you’re going to get rewarded just for showing up. That won’t build true self-esteem; instead, it builds this empty sense of ‘I’m just fantastic, not because I did anything but just because I’m here.'”

When teachers are allowed to set high expectations and force their students to live up to them, great things can happen. When they’re too terrified to fail students because of what may happen to their job or the fear of “how this will reflect on me,” they become unwilling culprits in an ongoing political movement to neuter kids of all intelligence.

3. How To Empathize With Others

Empathy is the ability to understand and share the feelings of another. Different from sympathy, you don’t just “feel sorry” for someone over something they’re going through. You’re instead able to step out of your own selfish experiences and understand it as if it’s happening to you. Many students are not taught to empathize with others at home or in class in spite of it being an essential part of bettering the human experience.

Preetha Ram, co-founder of OpenStudy and Dean of Science at Emory University, said it well: “I think what we need to teach our kids is compassion. I use this word over some of the other ones that occurred to me: emotional balance, resilience, kindness, ethics, morals.”

Ram continued: “I was privileged with an audience with the Dalai Lama and my kids were with me, and he looked at them and said to me, ‘What the western educational system does well is to teach children science and technology; they need more than that. What they should also teach (the children) is compassion.  Children learn this from their mothers, but you should also be teaching it to them in school so that they can live their lives with balance.’ He then went on to talk about how half the problems of the world would not exist if people had more compassion in their hearts. How this would lead to emotional resilience and the ability to withstand stress. So teach them compassion, to be good people, not just smart people.”

Unfortunately, many teachers find it difficult to teach empathy without stepping over the boundaries of what is and isn’t acceptable to share in the classroom. For example, religious beliefs (or the lack thereof) play a major role in developing one’s moral code. To teach empathy, one walks dangerously close to breaking down the walls between church and state. It can be very difficult to pull off without offending someone, and the constant threat of litigation is something with which all schools must balance.

Every subject, from literature and creative writing to math and science, is relevant to one’s placement in the world. Many students don’t believe this fact until they’re further along in their education, and too often we allow them to go along believing it because there is so much emphasis on teaching to the test and sticking with curriculum that we simply don’t have the energy to explain relevancy.

That’s fine. Business needs to get more involved in education to help students see the practical application, and to their credit, they are.

Michael Haberman, in a column for Huffington Post, writes: “Through training delivered by business professionals and through workplace experiences, students learn about professional expectations and behavior: how to communicate with their colleagues, function as a team, network, dress professionally, and use office technology.”

It’s only natural when you think about it. Teachers spend a lot of time in school before they ever step foot in the classroom. If you look at the typical path of a high school teacher, there is four to five years of school, rigorous testing, and ongoing professional development, all wrapped around the school environment. They never have a chance to get out in the private sector and see what many students are in for once they graduate high school or college. If business wants more qualified candidates, then they have to be involved.

Critical thinking, analysis, research, and problem-solving skills are only as effective as the level of expectations that a teacher places on a student and the administrative backing that said teacher gets in holding the student to those expectations.

When a school adopts the “everybody gets a trophy” mentality of awarding “C” grades (or better) to improve graduation rates, everyone loses. Most teachers understand how important problem-solving is to their subject area, and they do a fine job of teaching it in the early stages of a child’s education.

But if a child is allowed to coast into adulthood, he is fundamentally flawed and cannot grasp higher level information. That’s when the burden really starts to weigh on upper level teachers. They don’t have time to go back and teach fundamentals when they’re tasked with a loaded curriculum of complex information.

If schools can collectively make it their goal to teach critical thinking, analysis, research, and problem-solving skills, to students every day of every class through a student’s entire educational career, then success is inevitable. But it’s simply too tough of a task for one teacher and one teacher alone because these skills can be applied in so many different ways depending on the subject.

Again, the duties of communication should not fall on English and speech communication teachers alone. They’re a shared responsibility, and that is a fact you won’t have to spend much time arguing to a typical teacher. They get it. There is nothing more frustrating than trying to teach a student with severely impaired communication problems.

For the record, students need very little help in socializing with their peers. They do it all the time via phone calls, text messages, chat sessions, and the occasional face-to-face when they can look up from their phones long enough to mutter a few words. However, they still need guidance when it comes to context, age groups, and formal-versus-informal settings, and schools are in a good position to demonstrate social settings in which communication expectations change depending on the level of formality.

Social skills are a great opportunity for a student to put his best foot forward and show well-roundedness.

None of the skills listed above should be confined to one subject area. They are required curriculum in the education of life, and while teachers can make headway by thinking of ways to incorporate them into subject areas, it’s still a village thing, as in it takes one to instill students with a better sense of what is expected in life. What skills do you think MUST be taught in every class? Share your thoughts in the comments section below.