Top GMAT Advice From The Experts And Survivors

The GMAT, or Graduate Management Admission Test, is one of the last big obstacles that business-minded students will have to face before furthering their educational goals in a MBA program. The test measures a person’s analytical, quantitative, verbal, reading, and writing skills in an adaptive matter to determine your overall score, which you can then use to gain entry into a business school of your choice. Before you begin, you’ll need to know a little about the format of the test, mainly its adaptive nature.

According to Matt Broach, a Princeton Review GMAT Tutor, the adaptive nature of the test is one of the more challenging things that first-timers will face.

“Since the GMAT is a computer adaptive test, every right or wrong answer that you select is then used to determine the level of difficulty of your next question. So you can’t jump around and skip questions since each question determines the next one. You must work through the GMAT in order.” 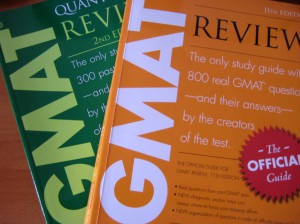 Before paying your $250 to take the real deal, you should listen to the advice of Broach and others, who have come before you, to get the best outcome. In that spirit, we’ve put together some of the top expert advice from around the web, so you can maintain control from the very beginning.

Broach emphasizes learning the format before you actually delve deeper into the material. “Unlike most standardized tests, which begin with easy questions and get progressively tougher, the GMAT always begins with a medium question,” Broach said. “If you get it right, then the computer will give you a slightly harder question. If you get it wrong, the computer gives you easier questions. Basically, the computer will zero in on your exact level of ability quite quickly and assign your general place in the scoring ranks early on. So attack those first questions extra carefully in order to get in to a higher scoring bracket.”

On Improving From The First Practice Test

According to Chris Ryan, director of product and instructor development at Manhattan GMAT, the question he hears the most often from students is, “I got a 450 or a 500 on my first practice test — do you see people go up a lot [in scoring from the first to final test]?”
“You can increase a lot from your first practice test,” Ryan said in comments to MBA Podcaster, adding that all the first practice test really measures is “where you are right then and not even that accurately.”

(And he would know. Before starting with Manhattan GMAT, Ryan scored a final score of 790 on the test [out of 800].)

Ryan added: “The reason you take a practice test early on is to feel what it feels like to get through an entire adaptive test in one sitting. And you should do that relatively soon — as soon as you can — especially if you’ve got a relatively short timeframe. … But don’t take that score to heart. Figure out what you did wrong on particular questions. That’s fine. But don’t worry about the score, and you can improve tons off of it.

For Swati Gupta, MBA admissions consultant for GyanOne, planning and scheduling your individual study times are almost important as the material itself. Gupta recommends that you estimate the time you will need to study for each section of the test and then, “Once you have reached a total hourly estimate, increase it by 20 percent … This will ensure that you are able to handle spill overs from work without letting them upset your study schedule.”

From there, Gupta advises you to keep a chart of your study schedule. “Once you know how many hours you need to study each week, and each day, chart out a regular schedule around it. For instance, work out when you will be doing the studying (late at night/early in the morning) and keep a rigid schedule around it. Any social event/fun/relaxation/laziness should be allowed to strike at anytime in the day other than these sacred hours.”

On Easy And Medium Difficulty Questions

Keshav Choudhary, a financial services professional currently with Morgan Stanley Capital International, advises that perhaps the most important piece of GMAT advice you can take is also the simplest: read the question.

“This is the most important task in the whole GMAT test,” Choudhary said. “Understand what is given, understand what is asked and answer the question. About 75 (percent) to 80 percent of the mistakes I made (particularly in the quantitative section) were because I either did not read the question correctly or because I didn’t read the associated information correctly.”

Choudhary reminds that it “is a test which focuses on high school mathematics and English” and recommends reaching for “the ‘low hanging fruits,’ or the easy and medium difficulty questions.”

Chaitanya Nijhara of StartupCluster.org admits to having some trouble with reading comprehension, but imparted an interesting technique for fighting through the difficulties and turning reading into a visual construct instead of a wall of text. He calls it the “para-box technique,” and it consists of the following:

On a rough sheet of paper:

1) Draw rectangular boxes, as many as the number of paragraphs in the passage.

3) Match the points to their respective boxes and determine whether it is an assumption, conclusion, or example.

“After you’ve done this for all [paragraphs], move on to the questions.

You’ll realize that you know the entire structure of the passage extremely well, and that’ll improve your accuracy,” Nijhara said.

Another point of view is to do things the old-fashioned way as accountant Brian Bleifeld suggests: “Read every day, good fiction and non fiction, and study combinatorial mathematics in school.”

“I scored a 700 on the GMAT without owning a GMAT book but after working on the LSAT I figured out the verbal section was all about being well-read and the math portion were watered down combinatorial math problems.”

Ryan reminds GMAT candidates that there are only about two minutes to work per question on the quantitative section, and that success amounts to learning the two types: problem solving and data sufficiency.

Ryan said to pay particularly close attention to data sufficiency. “It’s unique to the GMAT. It doesn’t exist on any other standardized test,” Ryan said. “And what it requires that you do, is determine not the answer to a given quant question, but to figure out whether you can answer that question given a couple of clues, and if so, do you need just one clue by itself or do you need them both? So it’s kind of a logic puzzle wrapped around a math question.”

Ryan added: “It’s one of the areas to really focus on and learn the logistics of when you’re first starting to prepare for the GMAT.”

Steve Shaheen, GMAT Instructor for Manhattan GMAT, joining Ryan on a recent edition of MBA Podcaster, adds that students should learn and master the content by reviewing math basics like algebra, geometry, and probability, if they hope to get a good quant score.

On GMAT Vs. GRE

When applying to business schools, most will look for your GMAT score, and the most prestigious schools expect a 700 and above — Ivy Leagues, 720 and up. But a growing number are starting to look at GRE scores as well — that’s Graduate Record Examinations.
The remaining question that may be on your mind is, why take the GRE if GMAT is what business schools have grown to expect?

Jeremy Shinewald, a MBA admissions consultant and founder/president of mbaMission, had this to say: “These days, with more and more business schools accepting both the GMAT and the GRE, an emerging MBA myth is that the GMAT is taken far more seriously than the GRE, and that the GRE is of dubious value to applicants. But why would an admissions office encourage you to take a test that it would not take seriously? Why would an admissions committee disenfranchise applicants who take the GRE, when one of the main purposes of permitting the GRE is to expand the applicant pool?”

Elaborating, Shinewald points to a recent comment from Dan Gonzalez, managing director at Manhattan GRE: “The exam itself is less important than your performance on that exam relative to your peers,” Gonzalez said. “Think less about which exam schools want you to take and more about which exam will give you the best shot at showing off your skills. The GMAT and the GRE are quite different—take some time to learn about these differences before making your decision.”

No matter what road you travel towards business school, you won’t get there without first conquering the GMAT (or increasingly, the GRE). While you may have been able to lucky-guess your way through high school and college, that simply isn’t feasible with the GMAT. It’s you against the adaptive computer technology in a battle for supremacy. But as long as you stick with some of the advice offered here — and be open to your own tips and tricks along the way — this is a foe you can conquer. If you’re ready to get started on your own free GMAT Practice Exam, we can set you up here at 4Tests.com. Best of luck to you!