Are College Friends Really Your Friends For Life? Dispelling The Myth 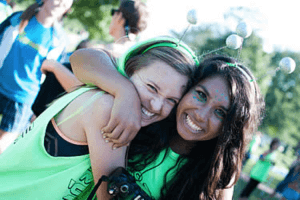 The Internet is a wild and mysterious thing. Never before in the history of humanity has a certain story or idea been able to take off and reach legendary status in such a short time. For most myths, it takes centuries of being handed down to get stamped into the public conscience. Not so with Kirsten King’s poignant look at college friendships. Her “19 Reasons Your College Friends Will Be Your Friends for Life,” has been shared on social media sites close to 1 million times since first being posted to the site in the fall of 2014. That’s rapid growth for such a short shelf life, but what she had to say obviously resonated.

The people we go to college with, become friends with, laugh with, drink with, Spring Break with, are destined to be with us until one of us kicks the bucket. It’s a nice thought, but it’s not always true. In fact, I would venture a guess that it’s seldom true. Why am I being such a Debbie Downer? Let’s get into it.

1. ‘Friend’ is a word thrown around way too often.

Your Facebook peeps — at least the vast majority of them — really aren’t friends. You likely have 1,000 or so “friends” on the social network and communicate with (maybe) 10 on a regular basis outside of work/online. (If you’re particularly social, that is, and yes, I’m including family members in that group of 10.) Most people would really only define a “friend” as someone you would eventually spend physical time with in addition to the obvious fondness for one another. We might have pleasant online relationships with others, but for the most part, those are just really good acquaintances. They’re not going to drop everything and pick up your kids from school if you locked your keys in the car, and it’s going to be an hour before the locksmith gets there.

2. Partying with someone may make for a good time, but it does not create a lifelong bond.

So they held your hair while you threw up or they cheered you on while you funneled that drink or they ended up in the cell next to you when things got way out of hand. You might have made memories that you look back fondly on, but that doesn’t mean you’ll ever see them again once you collect your degree and walk across the stage. Are they still going to make time for you — and you them — when you get married,  start a family, or take that job 1,000 miles away and start running with a new group of colleagues and co-workers? Likely not.

3. Living with someone? That doesn’t work either!

When you live with someone, it’s true: you’ll see each other at your absolute worst, and yes, there may be times when they are “the best people to do absolutely nothing with.” No one’s saying you can’t get to know someone intimately and enjoy their company when you room with them, but again: what happens when life takes you other directions? (And it will.) Do you stay in touch through Facebook, make plans to vacation with one another, share in each other’s joys and heartaches on a semi-regular basis? Distance is what really puts a friendship to the test, and I’ve had far too many good roommates that I no longer speak to — not out of hostility, just because of life — that I know it takes more than familiarity to make a friendship last. On the other hand, my very best friend, whom I still keep in contact with, has never lived with me ever. There may be something to that.

4. So who does make the best friend? Well, college may have something to do with it.

Most of us keep one or two good friends from high school, and that’s true whether you graduate with a class of 80 or 800. The public education system is simply too broad for you to find dozens of people that you connect with intimately. The first two years of college are often the same as well because you’re still trying to figure out who you are and settle into your career choice. But the latter part of college — that’s where your friendships are likely to grow into something that can survive the test of time. This is likely due to two factors: 1) You pal around with people, who share your professional interests; and 2) You have a stronger sense of self and are more confident in the relationships that you choose to keep and those that you choose to discard.

If your relationships from high school and freshman and sophomore years of college have managed to survive to this stage, it’s likely because that person still fits in to one of those two realities. 1) They follow the same professional path, you like them, and you’re likely to see more of them or have more to communicate about moving forward; and 2) They’ve proven time and again they’re a devoted friend, and you’ve reciprocated.

In reading this, I hope you don’t take it as an indictment of college friends or of Ms. King’s article. I think her piece was meant for a pop/entertainment value and should be taken as such. However, when it comes to defining the term “friend,” I think it’s something everyone needs to think about a little bit more before deciding. You can have friends in the moment, and many of your college friends will fit that bill. But when it comes to “friends for life,” college has something to do with it, but you will need a little bit more. Good luck in finding your friends for life!