Brainstorming: How To Do It Effectively 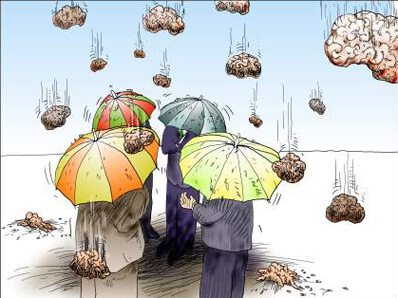 Brainstorming can greatly improve your chances of mastering the writing portion on most standardized exams. The reason: more often than not, you’re on a time crunch. You have to think of a way to get your ideas organized and formed as quickly as possible.

Unfortunately, most people have difficulty pulling this off.

After all, not all brains are programmed for this level of understanding. If you’re among those who have difficulty expressing your thoughts in writing by way of the ticking clock, we recommend the following:

One: Know Your Overarching Objective

The overarching objective, or what a writing prompt is asking you to do, will guide all your thoughts and actions during each timed response you face. When the objective is simple — as in, “Describe the main character in ‘The Cask of Amontillado'” — all you need to do is determine who that character is and point to specific examples within the text that demonstrate what kind of a person he is.

You don’t have to repeat words and phrases line-for-line, in this instance, but you do need to be able to point out actual evidence in your own words.

If we were using the “Amontillado” suggestion, then we might use our scratch paper to write “Narrator,” followed by adjectives like “vengeful, scheming, sensitive, psychotic, manipulative, etc.”

Using each of these words, we can point out specific evidence to prove our point. He’s vengeful because he wants to kill Fortunato; he’s scheming because he’s gone to great lengths to get his enemy down into the catacombs to exact his revenge; he’s sensitive because he’s willing to kill to make up for some perceived wrong, as in Fortunato was able to offend him to great lengths, yet the offense is not important enough to expound upon in the body of the narration; he’s psychotic because his way of “evening the score” is to kill his enemy even though his enemy hasn’t done anything close to that to him; and he’s manipulative because he knows just what to say to push Fortunato into a vulnerable state.

When the question is more complex, you will need to pay closer attention. For example, there were five stores. Store A sold 250 knickknacks; Store B sold 320; Store C sold 322; Store D’s sales are unknown; and Store E sold 394. Using the information given, find the pattern in the numbering, infer the amount of knickknacks sold at Store D, and explain your answer.

This is the type of question you may see on an IQ test, but it also shows up in upper level and college math courses as well as logic classes. If this were given as part of a written response, my first plan of action for solving would be to arrange the numbers on the page in the order given. Since I’m going to have to answer this question in complete sentences, I need to be able to notice patterns, and listing the numbers in ascending order is a good way to see if I can spot any.

Two: Give Yourself Permission To Write Terribly.

Notice that we’re not saying, “Give yourself permission to turn in terrible writing.” After all, this is brainstorming. No, when it comes to what you will submit, you want that to be the best possible representation of your writing. But if someone hands you a sheet of scratch paper, use it! No one will ever have to see, and that means you can float out some pretty bad, garbage ideas.

Remember, the brainstorming process is all about making sense out of what works and getting rid of what doesn’t. That means those bad ideas have to find their way out of your head if you don’t want them staying there. There are two ways they can get out — in a poorly written response that gets you a failing score, or on a meaningless shred of paper that will be tossed when the test is complete. We prefer the latter to the former. Here’s how we suggest doing it.

First, if there is a clock on the wall, make note of how much time you have left. Let’s say you have 10 minutes. We know that isn’t very long to do what you’ve got to do, but don’t think you can make up time by throwing the brainstorming process out the window. It’s far better to allot around 30 percent of your time (max) to brainstorming.

In the above example, that means around three minutes. But again, no more than that. You need time to do something with it.

Once you’ve set a time limit, your brain does something remarkable. It gets tunnel vision, in a good way, and focuses only on the next task at hand. Don’t believe us? Take a break from reading this. (We’ll be hear when you get back.) And in that break, do this: read a chapter from a book that you enjoy, grab a sheet of paper and a pen, set your timer for three minutes, and force yourself to write everything you remember about that chapter until the buzzer goes off. Go!

See how simple it is when you boss your brain around? It responds to most any challenge you set in front of it. Now take that same take-charge attitude into the written response portion of your exam. Be regimented about the brainstorming process. Tell yourself, “You only have three minutes; it’s your job to be writing anything you can think of that pertains to what you know about the question in this time.” Use the listing format. This grants you permission not to write in complete sentences so you can cover more ground, more quickly. When your three minutes are up, put on your game face and start writing.

Three: Treat The Page Like You’re Angry At It.

When you time your brainstorming session, you can’t afford to play nice with your scratch paper. Be mean to it. If you screw up the spelling of something, scribble it out. Erasers and trying to reshape letters are for losers. Just make one mark after the other until you have a complete idea — even if it’s an idea you don’t end up using — and move on to the next one. You proofread your final answer, not your brain droppings.

Four: When In Doubt, Be Ridiculous.

Aside from spelling and grammar errors, your brainstorming session needs a healthy dose of ridiculousness. Why do you need to willingly write bad ideas? Again, because it gets them out of your way so the good ones can come to the forefront. And if you’re invested in the process, they will.

Students often make the mistake of considering brainstorming a throwaway action. They believe it’s a waste of paper and time, and those can be two annoying wastes when it’s hard enough to write as-is. They don’t realize it’s actually integral to the writing process, and that the time spent brainstorming can actually greatly reduce the time and the difficulty in the act of forming sentences on a page to build a cohesive whole. Just remember: not everything that ends up in a trash bin is trash. Sometimes it gets you closer to the response that best answers the question.