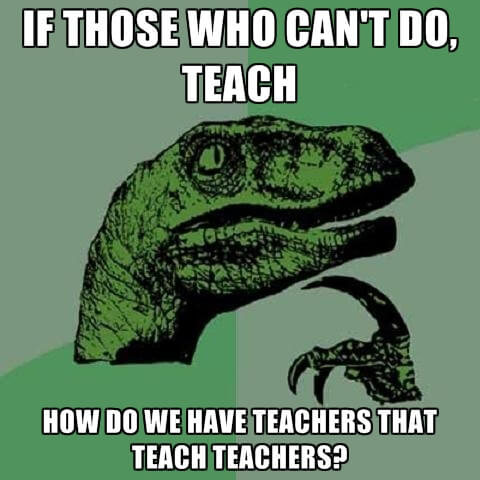 In 1903, George Bernard Shaw dropped his now famous four-act drama Man and Superman. This play was the first instance of that much-maligned, oft-paraphrased quote:

Bob: I’m so discouraged. My writing teacher told me my novel is hopeless.

And with a few simple words, teachers everywhere have seethed in anger at anyone who dares a repeat or rewording.

But is there any truth to it, and in the world of the 21st Century, will teachers also have to be “doers” as well? Are teachers “doers” now? All good questions. Let’s take a look at what a couple of Quora experts have to say on the matter.

Unfortunately, this is what people think about teaching and stereotype about teachers. Hence, a lot of people who would make excellent teachers refrain from it.

There is one thing about teaching, it is a very fulfilling job. If you like to see things grow, you would like to teach. It is also one of the most underpaid and assumed careers.

Let me compare it to a field where presently, only really capable people survive, finance. People think teachers have to live a mundane life, while working in finance is full of new challenges, while in my experience, quite the opposite is true.

Let me be very clear, if you are working in finance, this is by no means intended to be of any disrespect to you. In all probability, you are very capable mathematically and are mostly hardworking and you have my respect for that. I just want to highlight the difference between perceived ‘coolness’ and actual coolness.

So, the primary reason why some very bright people refrain from teaching is that it is perceived to be a repetitive job. Another major reason is it is financially low paying as compared to the alternatives. Teaching is quite a turn off for the bright and energetic on premises one of which is false, the other can be worked upon.

I don’t care about money, though. But why won’t you be solving a real world problem instead?

Like developing software, pushing the circle of science, expanding the knowledge of the world, right?

Simply put, the diminishing returns. There are so many bright people developing software, that removing one wouldn’t hurt the industry a lot.

But there is a dearth of really good teachers. And it is the most real world problem there is. Educating future generations so that they can carry the baton from today’s spearheads is not an easy task. It is one of the most important jobs there is and if we portray it as a lack of talent (as the quote suggests), we as a society would ultimately pay the price for it.

If you ask the students or their parents, every brilliant teacher is cherished. Aren’t we all grateful to the teachers who provided us with the correct guidance? You don’t get to see the value which you are adding instantaneously, but over the years, I am hopeful, you can judge a nation by the quality of its teachers.

Teachers and doctors are solving similar problems, doctors save life, teachers make lives. Many a teachers in today’s world are rather non-competent and they are screwing up potential in many lives. Yet, bright young boys are studying days and nights for medicals while none cares to be a teacher.

Don’t you think it is a job worth even the most talented, to bring out the talent out of others? Yet, negative aphorisms and negative image has taken over and the profession of teaching has been left with few competent hands outnumbered by incompetent ones.

I think this stereotype, like any other, has quite a hint of truth to it and that is a very bad news for all of us. If at all, we should try to change this and encourage the best to consider the problem of proper guidance and education to the upcoming generations.

Let me clarify, I do not intend disrespect to any teacher when I say the stereotype is quite true. But the problem is, at least in my part of the world, teaching is left as a profession with minimal money and instead of focusing on development of the child, they are focusing on the number of periods and course completion. We as a society, should change this, we should encourage people to take up teaching.

(On a personal note, trust me, there is nothing which can be done by a 25 year old male, which I cannot learn given ample time. And I am teaching and as you might have understood, I find my work very satisfying. Just to give you an example of how misplaced such a generalization can be and I really believe in what I have written above.)

(I intend to write this answer as a pitch to consider teaching as a career to the interested people, who turn down their desires on listening to questions like this. Kindly pardon my offshoots from the question premises.)

It’s right, most times. People who have the vision and determination to succeed, push through all obstacles and do what they want to. Those who remain unsuccessful, often end up giving advice to other people.

But there are several things I would want to make clear:

The use of the word ‘can’. Can is a word that you use for ‘potential’. Saying, “he can do this” is a statement on his potential to do that thing. “Those who can, do” means those who have the potential do it. But that’s not always true now, is it? How many times have you heard someone say that “you are capable of doing this”, only to find that you couldn’t do it, either because of the circumstances or because of your lack of talent, even if you had the potential.

This statement should not be considered to be as negative as it sounds. It can be considered as a highly positive statement, which could mean that those who fail, learn from their failures and help others not to fail. Their teaching others would eventually create a great impact, as they not only learnt from their failures themselves, but they also helped someone else from doing that mistake again. So, those who can’t, teach, and make it even better.

Every statement is not always true in every situation. It is true in most cases, under some constraints, but when you remove those constraints, the statements may not hold true. For example, “the more, the merrier” contradicts “too many cooks spoil the broth”. They are both true, but they’re applicable in different conditions and hence, are bound by different constraints.

So, yes, it is true in most cases, but not always.

Will Tomorrow’s Teachers Be Doers?

To ask this question, is to imply that they’re not doers now. To some degree, we suppose that’s true. But some people really do enjoy the experience of shaping young minds into knowledgeable adults more than anything else. It’s unfair to paint these individuals as failures or people who “couldn’t cut it.”

Unfortunately, in the years ahead, we can foresee a stronger demand for “doers” over “teachers” because schools are placing higher and higher demands on teachers. If pay ever catches up to these expectations, then it’s entirely possible you could see the teacher who loves teaching squeezed out of a job.

We think we’re a way off from that, and the pay will have to catch up to expectations in order to make this a reality. What do you guys think? In the future, will teachers — at least in certain subject areas — have to be “doers” even at the high school level? Share your thoughts in our comments section.