Cheating On A Test: 11 Ways Cheaters Have Pulled It Off 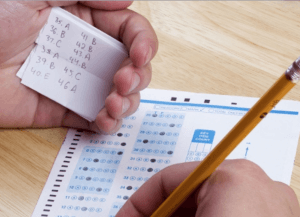 Cheating on a test is common in high school and college. The higher up you go and the more advanced the material gets, the easier it is to rationalize your way to an artificially high score. However, as the old saying goes, doing so often means that you’re hurting no one else but you (and perhaps the people whose lives you hold in your hands depending on the profession).

Nevertheless, the ways that people cheat on tests are quite creative especially as described in this reddit thread. While this may seem like a halfway endorsement of their actions, please know that it’s not. Cheating on a test will eventually catch up with you and with careers like medicine, it can hurt others as well, proving to be anything but a victimless crime.

Furthermore, knowing how people cheat on a test can help teachers and other educational professionals know what to watch out for. That said, here are some of the most inventive ways that people have cheated on tests.

11 Methods for Cheating on a Test

2. “The only time I ever cheated was on a chemistry final in college. We had to memorize a ridiculous amount of formulas which I thought was silly. We were allowed a TI graphing calculator and I had one that was dark blue. I wrote the formulas on the inside of the cover in graphite so you couldn’t see them unless the light caught it in just the right way. Ended up getting a 96 on the exam. No regrets, would cheat again (but haven’t).”

3. “Everyone has cheated on online quizzes and tests, but I took that s*** to the next level. I had a chemistry class where all of the quizzes were online at your own pace. I used a firefox plugin to intercept the form data that the quiz was sending back to the server and found that it wasn’t sending my answers at all, it was scoring it without telling me and sending a raw correct/total value. So I would start a quiz and ten minutes later send some form data with about 90% right. There was so little security on it that I could have told it I got 500% right if I wanted.”

4. “Not proud of this but for my final exam in my Shakespeare class there was a row of seats with their sides against a wall and I sat directly behind a really obese girl. Was able to search the answers on my phone as the way she was positioned in front of me blocked the professor’s view. Don’t think I would’ve passed otherwise.”

5. “Me and the kid next to me each read half the assigned chapter, then swapped answers. Worked for about two months before we got caught. Got a zero on that quiz, too bad the teacher dropped the lowest quiz grade of the semester. Got an A, would do again 9/10. Saved me ~200 pages of textbook reading.”

6. “In high school biology the desks were those black-top fireproof tables that show pencil lead really clearly, but can be wiped off with just a wipe of your hand. I sat next to a friend and any time there was a question on a test that one of us didn’t know, we would write the question number down on the table. We switched techniques, but the other person would either write the letter of the multiple choice answer down on the table too, or we would tap our pencil on the table (1 time=A, 2=B, etc). Then we’d subtly wipe the table and we were in the clear! The best thing was that our tests were still almost always different scores because there would be questions that we thought we knew, but didn’t.”

7. “Not me, but one of my college professors doesn’t allow water bottles on the table during exams. One year he found a kid staring very intently at his water bottle and went over to find that he had written a bunch of equations on the inside of the wrapper around the bottle.”

8. “I used to teach in various capacities at a university. The engineers were geniuses, possibly for their intelligence, but certainly for their cheating skills. They would do things like systematically distract all the proctors and then switch exam papers in some crazy synchronized act. Three, four, etc arms would all go up at the front of the room pretty much around the same time, the proctors would descend on them, look closely at a question they weren’t allowed to answer anyhow, and behind them everyone would swap. Then it’d happen again later. Apparently we never caught on, we only heard about it from one of the students who felt guilty. Then we setup a hidden camera. It was the single video I wish I still could have kept to this day.”

9. “I would study whatever was on the test until the very last second the test was handed to me and then I would turn it over and write down everything I wanted to remember on the back of the test and then proceed to take the test confident that I had my notes AND I wasn’t cheating.”

10. “I was in class last year and I looked up and saw notes written on the ceiling.”

11. “A friend of mine knew roughly what the essay questions on his final year exams would be so he wrote answers and then read them aloud, recording on his iPhone. He then took a pair of in-earphones and cut one off. Finally he cut a small hole in the sleeve of his jumper and ran the earphone from the iPhone up his torso (under the jumper of course) and right to the hole in his sleeve. When he sat the exams he hit play and propped his head against his arm (was inner forearm) as if he was supporting his head and then listened to the answer’s. Worked pretty well for him as he had to remember a lot of studies, names and dates and he didn’t get caught.”

Wow. That’s an impressive list of cheaters. But now we want to hear from you. What are some ways that you or someone you know have cheated on tests with or without getting caught? Sound off in the comments section below!