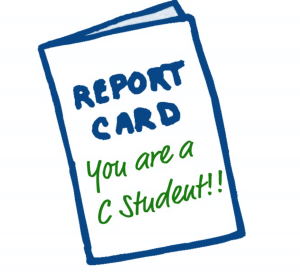 A recent article on Daily Entertainment has been making the rounds via social media positing the theory that C students are more successful in life than any other type of student. To “prove” the point the author provides 10 reasons why this is the case. At the surface level, he or she (name not given) makes some pretty good points. The quick rundown is below. You can read it in its entirety by clicking here.

1. They doubt the authority of the academic system.

2. They don’t want to follow the same old rules.

3. They are not trying to please and impress their teachers.

4. They have more pressing issues to worry about.

5. They have their own definition of success.

6. They know how to influence other individuals’ capabilities.

8. They don’t try to be perfectionists.

Furthermore, there are some people on this discussion thread over at Quora who somewhat agree with the sentiment, though they do offer some compelling reasons why you shouldn’t set out to be one of those C students.

Take Denise Tapp, for instance, who writes, “Real life experiences will reveal true genius. Some of the most successful people I know were C students in school, but they applied themselves with determination to every problem and continued to learn and grow and succeed.”

That’s where articles like the one referenced at the very beginning of this post fall short. They find legitimate-sounding reasons to encourage students to take the easy way out when the reality is that many C students are just somewhat bright people, who never apply themselves.

Also, many C students may be the creation of teachers who are too burned out to give anything lower than a C because they don’t want to deal with the administrative nightmare that so often comes these days from failing a student who simply isn’t turning in his work.

It is important to note that there are several examples of high school and college dropouts who went on to do pretty remarkable things in life, achieving far more than the standard A students were ever able to accomplish. But before grouping the average C students in with these individuals, it is important to understand a few things about why those outliers succeeded.

a. They were exceptions to the rule.

Many C students or school dropouts were able to achieve great things because they had a naturally higher intelligence not reflected in their commitment to school. They were likely bored with it, but they weren’t so bored that they refused to pursue other interests and passions. In fact, it was quite the opposite. They did the bare minimum at school and pursued their true callings with an almost maniacal obsession. Had they channeled those energies toward school work, they would likely have made straight A’s with little difficulty. But they knew where their time was better served and chose the path that came more naturally.

b. They were not like the ‘typical’ C students.

Not to be insulting to C students in general, but the truth is that many who qualify simply do so out of laziness. They are disengaged from their education or they have problems with authority, and they are suspect of the true value of an education. However, it is very well established that college grads, even today, make far more money in their lifetimes than non-college grads. This data is what it is because of the reality that most underachievers never really stumble into the billion dollar company of a Mark Zuckerberg. Reading and taking to heart articles like the one referenced at the beginning of this piece is dangerous because you can find yourself sloughing off knowledge and life skills that you actually need because you believe that your disinterest will pay off eventually without you actually having to work for it.

c. They understood that one way or the other, they were going to have to get their education and it was going to take a lot of work.

While The Social Network film may have glamorized the birth of Facebook a bit, the reality per Zuckerberg is that if they had made an accurate depiction of what really happened, it would have been one of the most boring films of all time. Most of “The Facebook”‘s development happened in front of a computer screen and not in any kind of interesting college environment. There was coding, coding, and more coding. Zuckerberg understood that he had to sacrifice some things and do the dirty work to make his creation into what it would become. While he may not have gotten much out of his Ivy League education, he made up for it in what he learned by obsessing over his creation. There was a ton of hard work involved, and that is something that many C students don’t realize as they coast through their educational journey.

Before you see something like 10 Reasons C Students Are More Successful and share it on the social network of your choice, do a little soul searching. What are you doing to compensate for your lack of effort and achievement at school? If you cannot answer that question with a lightning-quick accuracy, then you may want to hit those books a little harder.

But what do you think, readers?

Are C students more successful, and if so, what elements have to be in place to make them so? Sound off in the comments section below.