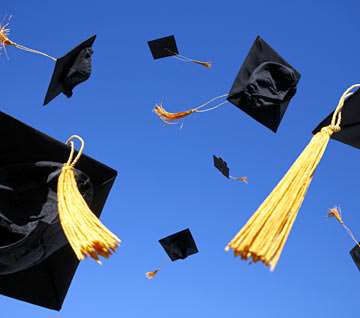 The latest survey released from PayScale shows what you can expect from your earnings versus the cost of education for each of 1,310 schools for which the site had adequate data. This survey is definitely a blunt instrument and under no circumstances should be taken as gospel when it comes to actual return on investment (ROI), but it does provide a general insight on schools that are doing very well versus those doing poorly. There are a number of story ideas that you can take from each ream of data, but one we’d like to focus on today is how schools at the top compare and contrast with those at the bottom.

Immediately, one big thing that jumps out at us here is that the top 10 graduated students at a much higher rate than did the bottom. For schools that made the top 10, only two scored lower than 88 percent on graduation rate, and those two — NYU-Poly and Stevens Institute of Technology — scored 67 percent and 78 percent, respectively. (Still highly respectable when compared to the bottom 10, which more often than not earned a failing grade.

In the bottom 10, only one graduated students at a rate better than 70 percent (71 percent, to be exact, and that was the Maryland Institute College of Art). The next two highest rates belonged to University of Montevallo (47 percent) and UNCA (55 percent). While both were failing grades, they were much better than the remaining seven schools, which issued diplomas to between 21 and 34 percent of the student body — a dismal track record no matter how you slice it.

As a result of these numbers, it’s hard to argue against the fact that higher graduation rates lead to higher earnings and an overall better ROI for salaries earned versus the actual cost of education.

So what should colleges and universities be doing to ensure higher graduation rates so, perhaps, these numbers might improve?

College isn’t for everyone, and just because one doesn’t go to college, that doesn’t necessarily mean they’re doomed to an unsuccessful life. Universities and colleges should do their part to make certain theirs is a good fit for a student before extending acceptance. At the state level especially, there is often a come-one, come-all attitude that lets in students who might be better served plying a trade or skill. By expecting more from their applicants, these institutions for higher learning could ensure that only the best qualified students are allowed entry. This could improve the quality of instruction and lead to higher retention overall.

Getting It Done In The Classroom

Policing the admissions process is a start, but it’s not enough. Once students are in the door, they need to connect with their subjects and be inspired to take charge of their own learning. That’s where the classroom is so important. Colleges and universities should invest in quality professors instead of simply trying to get a warm body at a good price. While tenure can encourage laziness and an unhealthy godlike mentality in the minds of many professors, it more often than not attracts talent that truly excels in the classroom as opposed to fledgling instructors with limited experience. If students are to learn from the best, they must be taught by the best. Too often, that doesn’t happen in American higher education. As for the good teachers, they’re often looked over or ran off because of dismal job prospects.

Cross-Curricular Emphasis On Career And Technology

Not all degree plans are created equal. One can’t argue with that. An art major, 99 percent of the time, is not going to out-earn an engineer unless he wins the lottery. However, each degree plan can be viable if there is a healthy cross-curricular emphasis on career planning and technological relevancy. Students mustn’t be allowed to pick a major based simply on what fascinates them. They should see the professional application. They should also be well-versed on new, existing, and emerging technologies, since virtually every career path moving forward will employ some form of tech in the day-to-day. By failing to plant these two seeds across every aspect of the product catalog, a university or college is doing itself and its students a grave disservice.

If students were professionals, they’d be out there in the world plying their career of choice and wouldn’t need school to get the job done. At the collegiate level especially, this holds true. That’s why now more than ever, colleges and universities should do all they can to ensure that a student who comes through its doors gets some form of hands-on training. By reducing the size of classrooms, hiring more teachers, and establishing working relationships with businesses out in the community, they can make sure their enrollees have every opportunity to succeed and a hand to guide them through all the available options. Schools that do poorly at this find that a lot of their students drop out after a year or two (maybe less).

The PayScale data isn’t the last word on who are the best schools and who are the worst, but it certainly starts a conversation worth having. Students look to college to prepare them for the real world, but if a school is unable to graduate even half of its enrollees, then there is an obvious disconnect that needs to be diagnosed and corrected. While an improve college graduation rate won’t fix the problem altogether, it will ensure that more students are out there in the world earning more than they would be otherwise. What do you think — does a poor college graduation rate lead to a poor return on investment for all college graduates?