Dealing With Parents: 10 Of The Strangest Teacher Tales You’ll Ever Read 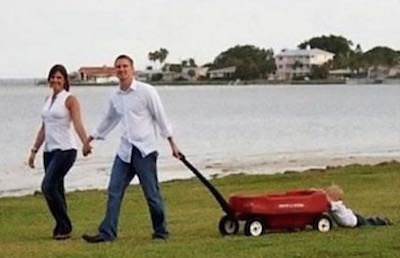 Teachers of Reddit get asked a lot of interesting things, and if you have any interest in the profession whatsoever, we suggest you bookmark the AskReddit tab to hear just what we’re talking about. Today, we want to focus on the issue of dealing with parents and the tremendous amount of self-control that educators must have to keep from losing it. The exact question goes something like this: “What was the strangest encounter you’ve had with a student’s parents?” Here are some of the oddest/funniest/creepiest/most infuriating. If you’re going to teach, this may be what you have to look forward to. Good luck!

1. “I am a male who teaches at the elementary level. I had a Ukranian girl my first year of fifth grade. During parent/teacher conferences the father said ‘Enough of this academic business. In your opinion as a man, do you feel that my daughter will make a good wife someday?’ It was one of my first conferences ever, and it is still the weirdest so far.”

2. “I was assisting as an Early Literacy teacher for ELL students from Mexico. There was this one little girl who would throw a tantrum if she didn’t get her way and would look me right in the eyes as she would pour her drink on herself during breakfast. She was just seeking attention, but her behavior was so disruptive she wouldn’t learn anything. She did other things that were not appropriate for a child of that age. We called her mother in to talk about the child’s behavior.

“The mom walked in the next morning 15 minutes after class started and went on a rant about how we were starving her child because we took away her milk the previous morning. We told her what actually happened and explained that the child’s attention seeking behavior is disrupting her learning. I asked the mother to come back after school because she was now disrupting my lesson with the other students and she refused to leave. I quickly gave the class group assignments and went back to speak to the mother to just get it over with.

“I elaborated on the child’s behavior during class and that she was obviously not getting enough attention at home. The mother started making excuses about how she doesn’t have time for her daughter because she’s working and has a boyfriend now. This p***ed me off. She then called her daughter over and started threatening her by saying if she misbehaves again she’s going to send her back to Mexico all alone and no one will love her anymore, that she’ll be abandoned in the streets like a dog. She then told the girl that she was going to take her to the bathroom and spank her until her a** is blue because the teacher says she stupid and bad. She then started leading the girl out of the class to the bathrooms and I grabbed the child back and told the mother she has to leave now. She said I better not call CPS and then left.

“I called administration, explained what happened and they said they would handle CPS and everything else. I then took the girl aside and explained that she is not stupid or bad, hugged her, gave her a sticker and let her draw for 1/2 an hour.”

3. “I used to teach 7th grade Sex Ed and held a preview night beforehand. One time after everyone left, a mother stayed behind because she didn’t understand what a menstrual cycle was. So there I was, a man, teaching the mother of one of my students why and how she experiences a period once a month.”

4. “I had a kid feel sick and went to the nurse. They tried calling home/work/cell numbers but either no one answered or the mailbox was full. So when school was dismissed he was sent home. Mom was p***ed and stormed in the next day with a ziplock bag full of vomit to prove he had been sick. This was not the only time we had to threaten to call the police to remove her.”

5. “Parents have, on more than one occasion, pulled me aside at parent/ teacher conferences and gave me their express permission to use corporal punishment on their sons and daughters. Many times I will laugh it off, and many times they will grab me by the arm and tell me, “I’m serious. You can hit him/ her. I won’t say anything.”

6. “At an after school conference, a student’s parents wanted my mother to stop giving homework in the middle of the week. Not because it was difficult or due to the kid playing sports (that’s another story). But because on Wednesday nights, that was when their family went to the local Walmart and spent 3-4 hours in the store … not shopping or getting groceries … they just walked around … a normal family outing for them.”

7. “I had a conference once with a divorced couple and their new spouses. They insisted on having one conference instead of two. It was clear that the wounds hadn’t yet healed, especially because dad’s affair with stepmom was the reason for the divorce. They spent the whole conference arguing about who was screwing up their kids more. So awkward.”

8. “I had a parent get mad because I gave her kid an F on a paper. ‘DON’T YOU KNOW THAT CAN HURT THEIR SELF-ESTEEM!’ My response of ‘Well maybe he should have done the work’ didn’t defuse the situation. She threatened to go to the school board, the mayor, and the superintendent in that order.”

10. “Too many parents try to fight either the teacher or a student their own child dislikes. I’ve had a parent want to fight me. I looked at her like she was crazy and she left. I’ve had fellow teachers sneak out the back way to avoid parents fighting them. One of my friends had to drive a student home because the parents of another student wanted to fight him. Yup. Grown a** people wanted to fight a 12-year-old boy.”

If you’re in the teaching profession or you’ve student-taught, what’s the strangest case of dealing with parents you’ve ever seen? Sound off in the comments section.