Teachers Weigh In On Their Most Unforgettable Students 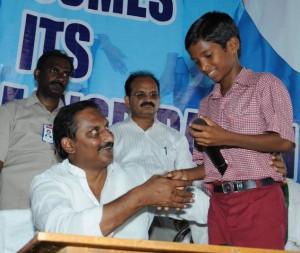 If you’re thinking of pursuing a career in education — particularly as a teacher — then get ready to spend time with some of the most amazing, frustrating, infuriating, and wonderful people around — your students. Throughout a career in education, there will be some kids that you never forget — for both positive and negative reasons. On a reddit thread, someone asked retired teachers to weigh in regarding their most memorable students. We suggest you check out all the stories at this link, but for a quick primer, here are eight of our favorites.

I get a call in my office one day. “Mr L you are needed in the gymnasium, there has been a report of physical aggression.”

So I go down and investigate, it happens like this:

Small kid falls down and tries to get up.

Larger boy on team pushes him back to the ground.

Small kid tries to get up three times and the large boy wont let him get up.

Random boy comes out of no where and lands a left hook across the large boys face dropping him to the ground.

Random boy proceeds to mount the large boy and slap his face back and forth four times.

He gets up from the large bloody boy with a smile on his face. He walks over and sits on the bench

I walk up and ask him what the story was.

He says “What I did was wrong and the consequences for it are probably pretty bad, but you know what it was worth it.”

Love that kid to death.

Teacher here. People are wondering why there are mostly bad stories here, and that is because there are way more good stories than bad, i.e. a student who becomes an accountant is way more common than a psychopath. There are tons and tons of students who work hard, and are respectful, but that I will not remember as well as the ones I was afraid might try and kill me.

One of my old music teachers told us about how he taught one of the biggest DJ’s in the world right now, and how he’ll never forget him, not because he was anything special, but because he was completely normal for a kid that age, he just worked unbelievably hard for his goals, and when he first got signed to the record label he is with now, he came around and thanked all the teachers for their patience with him (he signed to the label when he was 20 I think)

He said it was nice to be appreciated, and just to use as an example that hard work can get you a lot further than talent, especially in an industry like Music.

I was a new teacher. A student went out to the washroom, came back shaking and crying. Took her out into the hall with the door open as per policy. Through the sobs she tells me that her best friend from a neighbouring city had died. All I wanted to do was hug her and tell her she’ll be ok. I didn’t. I followed the no touch policies and sent her to the counsellor. To this day I still regret not hugging her like I would any other person in this situation. My humanity had been taken away by my gutless rule following and fear of losing a job.

No Teacher (Or Student) Should Have To Put Up With This

I once had a kid that stood on a desk and announced to the entire class that he was going to pee out of the window. He pulled down his pants and let the floodgates open. It almost worked, but the stream didn’t end up making it to the window so the girl next to him got soaked. She didn’t come back to school for another week and I later found out that she needed therapy. He was in 11th grade.

Not retired, but I taught English Literature in a school for two years while I was training.

One of the kids in the class I was given seemed to take a real interest in me, and it turns out he had a similar music taste to me. He was essentially one of my friends, and he’d come to the teacher’s lounge at lunch and we’d talk about bands we liked and games we liked. He was a bit of a little [expletive] at the back of class sometimes, as him and his friend used to talk in this “Herbert the Pervert” whistly voice, and constantly distract me from teaching because it was so [expletive] funny.

Played scrabble at lunch once with him, and he actually beat me. Bright kid, possibly the best student I’ve ever had, aside from the distraction.

The other student I will never forget was this friendly, but shy girl. She started off doing nothing, which was resulting in some very low grades. So I reached out to her parent and the parent told me about some difficult things that were happening in her life. We worked out a plan and started getting the girl to catch up in class. This had her staying after school a couple times to catch up on the material, within a month she changed her grade from a low F to a C, and suddenly had a solid interest in the class and material. She would actually read the chapter ahead of time(this is unheard of in lower levels of HS math) and ask clarifying questions. It was just really cool to see her transform from a shy student who had lost hope, to someone who enjoyed the class and worked ahead and became confident in the material.

A Little Effort Can Make A Big Difference

My father’s a primary school teacher, and I had a gap year a couple of years back, so I volunteered to do some work at his school. Music lessons, cleaning up, helping out during certain classes…

There was this one kid in his class, a very shy and quiet girl that didn’t speak much at all and preferred reading all the time. I had a little chat with her one day and we got along great. She turned out to be highly intelligent and very mature for her age, with an incredibly dark sense of humour. Throughout the year, she dared to open up to me more than to any teacher, and subsequently dared to be much more open and talkative in class. Definitely won’t forget her, because she made me realize how much one person can make a difference when they simply are there to talk and (more importantly) listen to you. That’s one of the main reasons why I’m currently pursuing a career in education as well.

As you can see the teaching experience isn’t always the best, but every now and then you’ll run in to the student or the class that makes the effort all worthwhile. Who are some of the most unforgettable students that you’ve taught? Share your stories in our comments section.