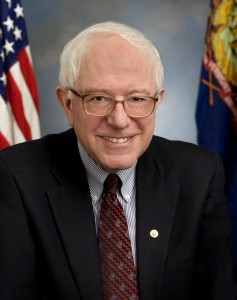 It’s important to stay on top of the things that are happening in the world today, particularly as it relates to what most affects you. Since I’m assuming most of you are affected by education, it would be wise to keep your eye on these stories for the week, starting with a radical plan that one presidential hopeful has to change the face of the education system.

Bernie Sanders wants you to have free tuition.

Sanders, so far, is the only presidential hopeful that we know of who will be challenging Hillary Clinton for the Democratic nomination, and with this idea, he may have just stolen the entire Millennial vote. Sanders thinks that college tuition — you know that thing that goes up exponentially every year without doing you exponentially more good? — should be F.O.C. (free of charge) at all four-year universities. Here’s how he plans on making that happen.

The “College for All Act” would put 67 percent of the college tuition burden on the back of the federal government ($47 billion out of a projected $70 billion expense). As for the remaining 33 percent, that would be the responsibility of the states ($23 billion). Danielle Douglas-Gabriel of the Washington Post thinks it’s a swell idea but believes the Independent candidate running as a Democrat is a little kooky if he thinks it’ll work. From her piece:

“But so much of what Sanders is calling for would take a level of enforcement and compliance that would be difficult to achieve, said Iris Palmer, a senior policy analyst at the New America Foundation. More importantly, she questioned whether free tuition would be sustainable if it encouraged more people to go to college.

“‘What happens at the next recession when the money from Wall Street drops and the number of students enrolling in college swells? How could a program like this be sustained?’ Palmer said. ‘And how would you keep institutions from consistently increasing what they say it costs to educate a student?’

“Another hurdle is sustaining state investment, which rises and falls the economy. A big part of the reason public colleges are so expensive now is because states slashed higher education budgets during recessions and never fully made up for the loss and schools raised tuition to compensate. While some states might be enticed by the promise of federal aid, others may continue to treat higher education as a discretionary expense.”

You can read her full rundown at this link.

America, your student loans are costing you more than $1.3 trillion.

A new report from the Real News brings to depressing light the enormous tax burden felt by over 43 million Americans. According to Sharmini Peries, that relatively small number has the enormous task of shouldering the comparatively larger $1.3 trillion student loan number, making the graduating class of 2015 the most debt burdened in history.

More from the piece:

“College costs have increased 1000 percent since the ’70s. Students are graduating with an average of $25,000 to over $100,000 in debt, and often with an education that will not secure them a good-paying job.”

Peries goes on to blame Republicans in Congress for proposing $150 billion in cuts to student aid on top of the already tremendous debt load. (Those 43 million Americans average more than $30,000 per person in student debt.) You can read more at this link.

In keeping on the topic of desperation in education, there’s this thing that happened. I knew it was possible to steal some services, but an education? Aren’t we the land of the free? Shouldn’t everyone have the right to an education? Well yes and no. When you’re lying your way into a school that you’re not eligible to go to, the government frowns on that. Of course, in the following story, we’re not sure the poor guy is guilty, but that’s just free advice. More from the piece:

“Just over a year ago, Hamlet Garcia lumbered up the steps of a stately courthouse in Norristown, Pa., wondering how much longer he would be free.

“The Philadelphia resident and his wife, Olesia, an insurance agent, were about to go on trial for theft of services, an offense usually reserved for cable service pilferers and restaurant bill dodgers. Their alleged crime: stealing an education for their 8-year-old daughter, Fiorella.

“Garcia, who came to the United States from Cuba when he was 18, remembers thinking one thing as he headed into the courthouse: ‘This isn’t the kind of thing that happens in America.’

“He faced a potential maximum sentence of seven years.

“Garcia says in the 2011-2012 school year, his wife and daughter spent nine months during a marital separation living with his wife’s father in Lower Moreland, a quaint, suburban township of rolling hills and stone colonials. During that time, Fiorella attended the district’s much sought-after elementary school, where she read picture books, learned the alphabet and made friends.

“The local district attorney’s office contends Garcia and his wife were never truly separated and that they always lived in neighboring northwest Philadelphia, where many of the schools are struggling, and lied to gain entry into the Lower Moreland schools.

You can read more on this developing case here.