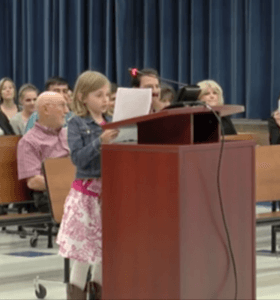 A fourth grader just handed proponents of standardized testing their walking papers in as passionate of an address to a school board as I’ve ever seen. The girl’s name is Sydney Smoot. She is a fourth grader at Brooksville Elementary School in Florida. She’s also a new Internet celebrity thanks to her unabridged thoughts on being tested to death.

Sites like IJReview wasted no time in posting and reposting the 2-minute video of her smackdown. Before going any further, here’s a transcript of what she said.

“Fellow members of the school board, today I will express my concerns about the FSA testing. I consider myself a well-educated young lady. However, with FSA tests my five years of school… do not matter. This testing looks at me as a number. One test defines me as either a failure or a success through a numbered rubric. One test at the end of the year that the teacher or myself will not see the grade [for] until after the school year is already over. I do not feel that all of this FSA testing is accurate to tell how successful I am. It doesn’t take into account all of my knowledge and abilities, just a small percentage. Here are my concerns. First of all, I do not feel good signing a form in the FSA ensuring that you can’t even discuss the test with your parents. I am not comfortable signing something like this I have the right to talk to my parents about any and everything related to school and my education. Second, why am I being forced to take a test that hasn’t even been testing on students here in Florida, so how can it be accurate and valid on what I know? Why are we taking most of the year stressing and prepping for one test at the end of the year when we should be taking tests throughout the year that really measure our abilities? My opinion is that we should take a test at the beginning of the year, middle, and end of the school year to accurately measure what we know. The pressure this puts on me and I’m sure most students is not healthy. Why should we have so much stress about one test when we should be learning and having fun in school? With all of this testing in school, more fun things such as recess are being eliminated because of training for the test! So, ladies and gentlemen of the school board, I urge you to put a stop to high-stakes testing today. It’s not fair to the schools, teachers, and students. Parents and students, contact your governor to put a stop to all the standardized testing. Thank you so much for your time.”

And here’s the video if you want the hand-motions and undeniable cuteness.

While Sydney’s plea to stop the high-stakes testing was a bit rough around the edges on content — too much testing, so replace one test per year with three? — her delivery was smooth and passionate.

And here are a few reasons why underneath it all, she has a valid point:

First of all, asking a child to sign a form that forbids them to speak with their parents about the content of the test is one of the dumber things I’ve ever heard. Not only is it a clear violation of parental rights — an overreach in every sense of the word — but it also falls way short of common sense to think that a fourth grader is capable of entering into legal agreements. The government has definitely nosed its way in to areas of our lives that it has no business being in, but we are a long way off before any sane, rational person thinks that’s acceptable.

Secondly, teachers have their ears closer to the ground regarding their students’ abilities and shortcomings, and tests like the FSA have a tendency to remove the power of education from the very people who need to be wielding it. A teacher teaches based on knowledge, training, and ability, but when everything hinges on a standardized test, you don’t allow them to do what they do best. Instead you’re left with one of the following.

A teacher who gets burned out and leaves for another profession. Seriously, public schools pay terribly, especially if you’re breaking it down on an hourly basis. In my own experience, I was working more hours in the 180-day school year than most year-round full-timers did. And while you did get some time off during summer, you didn’t get nearly as much as the kids. You still had to attend in-service training and prep for the upcoming semester so the start of your school year didn’t turn in to a 16-hour per day nightmare.

A teacher who simply teaches to the test. Teachers who teach to the test lose their passion for education rather quickly, and it can make them wholly ineffectual. Essentially, they are forbidden from using the skills and techniques they learned and honed while preparing to become a teacher. Should they ever need those skills and techniques again, they’re probably too stunted to matter. After all, if you don’t lose something you usually end up losing it.

So Sydney Smoot is definitely on the money. The culture of most schools throughout the U.S. has taken on a fear-of-the-test mentality than one geared around true learning. But with enough little voices like hers, there’s still time to make a big impact for the betterment of the education system. Good job, Sydney!