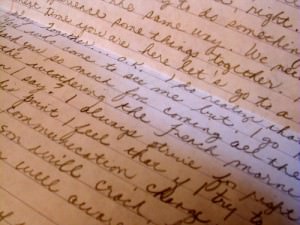 For the last few years, some in the education community have asked the question as to whether or not it’s still necessary to teach cursive handwriting in school. The thinking is that you never have to use cursive after about the sixth grade, so what’s the point?

Well, the debate over cursive will rage on, but one thing that shouldn’t change, according to a new study, is the necessity to have students use handwriting over a laptop. While laptops provide a number of applications that just aren’t possible with a pencil or ballpoint pen, they fail in one key area of your education.

“Our new findings suggest that even when laptops are used as intended — and not for buying things on Amazon during class — they may still be harming academic performance,” says psychological scientist Pam Mueller of Princeton University, lead author of the study.

Tracing the evolution of their idea to weigh handwriting versus laptop use in taking notes, Mueller shared a personal experience with the website Interrete.

“I felt like I’d gotten so much more out of the lecture that day,” says Mueller, who was working with psychology researcher Daniel Oppenheimer at the time. “Danny said that he’d had a related experience in a faculty meeting: He was taking notes on his computer, and looked up and realized that he had no idea what the person was actually talking about.”

“In the first study, 65 college students watched one of five TED Talks covering topics that were interesting but not common knowledge. The students, who watched the talks in small groups, were either given laptops (disconnected from Internet) or notebooks, and were told to use whatever strategy they normally used to take notes.

“The students then completed three distractor tasks, including a taxing working memory task. A full 30 minutes later, they had to answer factual-recall questions (e.g., ‘Approximately how many years ago did the Indus civilization exist?’) and conceptual-application questions (e.g., ‘How do Japan and Sweden differ in their approaches to equality within their societies?’) based on the lecture they had watched.

One of the likely reasons for this discrepancy is that we tend to look at concepts as more complex than basic information — they are — and so we obsess while typing over “getting it right” and not making any mistakes. When all you’re basically doing is regurgitating information, the need for perfection is not as great because we can simply shorthand-type and get the information down before moving on to the next data byte.

But when you utilize handwriting something magical exists that is more surefire than clumsy fingers on a keyboard.

You hear the words. Instantly your mind thinks of the best way to simplify the information into its most basic form without losing any of the “legs” on which the concept is built. You’ve essentially already heard the information twice before transferring it to paper, and as you write your brain continues to reformulate the concept until it becomes more palatable.

“It may be that longhand note takers engage in more processing than laptop note takers, thus selecting more important information to include in their notes, which enables them to study this content more efficiently,” they write.

The results proved to be the same even when laptoppers were specifically instructed to avoid verbatim transcription. And even after one week removed from the task, longhand note-takers were able to recall much more information about the concept than their laptop counterparts.

“I don’t anticipate that we’ll get a mass of people switching back to notebooks,” Mueller told the website, “but there are several new stylus technologies out there, and those may be the way to go to have an electronic record of one’s notes, while also having the benefit of being forced to process information as it comes in, rather than mindlessly transcribing it. … Ultimately, the take-home message is that people should be more aware of how they are choosing to take notes, both in terms of the medium and the strategy.”

To date, the best program that we’ve found for having the best of both worlds is the Evernote-created Penultimate app. With Penultimate, you can open up a page and start writing with either your finger or stylus. You can adjust the width of the pen tip, freely utilize an eraser, change the color, and more. While there may be other pure note-taking programs that do it smoother on the page-to-page transitions, Penultimate has the huge benefit of communicating directly with Evernote so that once the two accounts are linked, a Penultimate notebook automatically saves for easy viewing on Evernote.

When the two are used in conjunction, it’s as close to handwriting notes that you can get while having the convenience of an electronic record that will travel with you wherever you go.

But again, Penultimate is the preferred app for us because of that Evernote compatibility. If you don’t use Evernote, then you may find a rival option that makes better sense when switching from one page to the next.

By changing the way that you take notes, particularly for conceptual thinking, you can greatly improve your chances for recall and understanding. Before you open that laptop, consider breaking out pen and paper or a stylus and tablet.